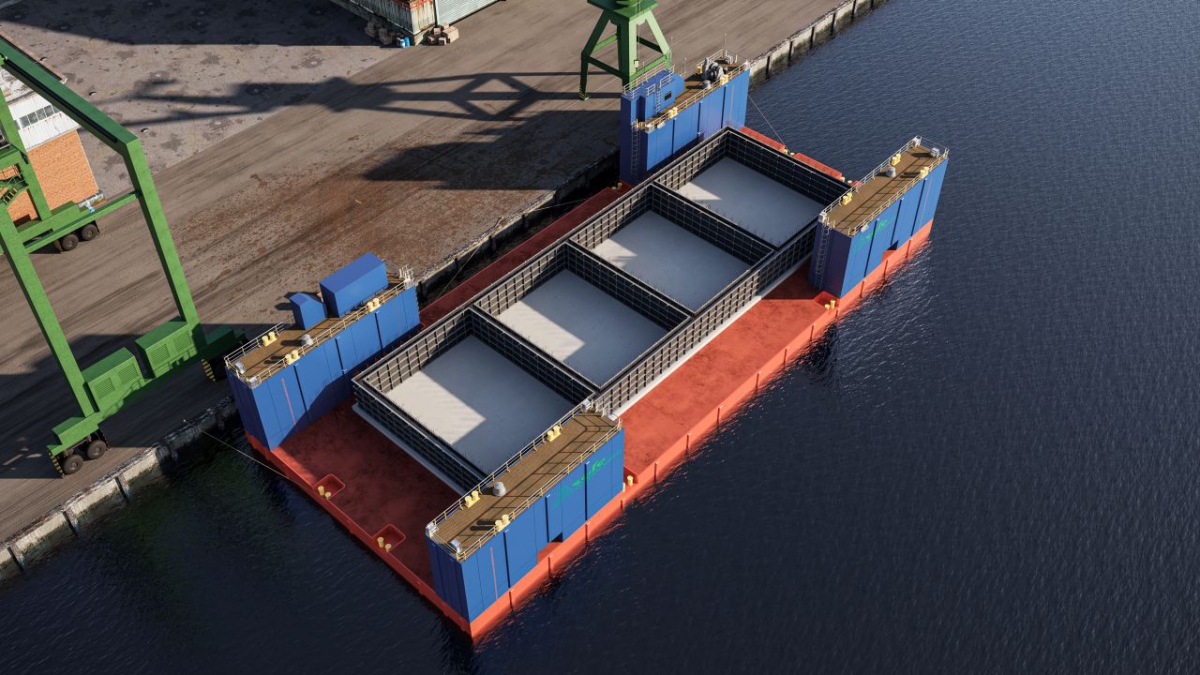 Shipyards
"Pontoon-dock" by Safe shipyard will save time, money and... the environment. Loads up to 5,000 tons will no longer be a problem

The Floating Docking Platform (Pływająca Platforma Dokująca, PPD), on which the Safe shipyard is working intensively, is a multifunctional vessel dedicated to a wide range of recipients - companies from the shipbuilding industry, offshore sector, contractors of marine hydrotechnical facilities and seaports.

What is the originality and versatility of the PPD?

- Our Floating Docking Platform has docking and transport functions in the water-land and land-water relationship. The floating object docking technology developed by Safe allows, in addition to taking the object from the water, its transport on modular transport trolleys (SPMT) to the quay, and even to the hall - explains Marek Siemaszko, CEO of Safe. 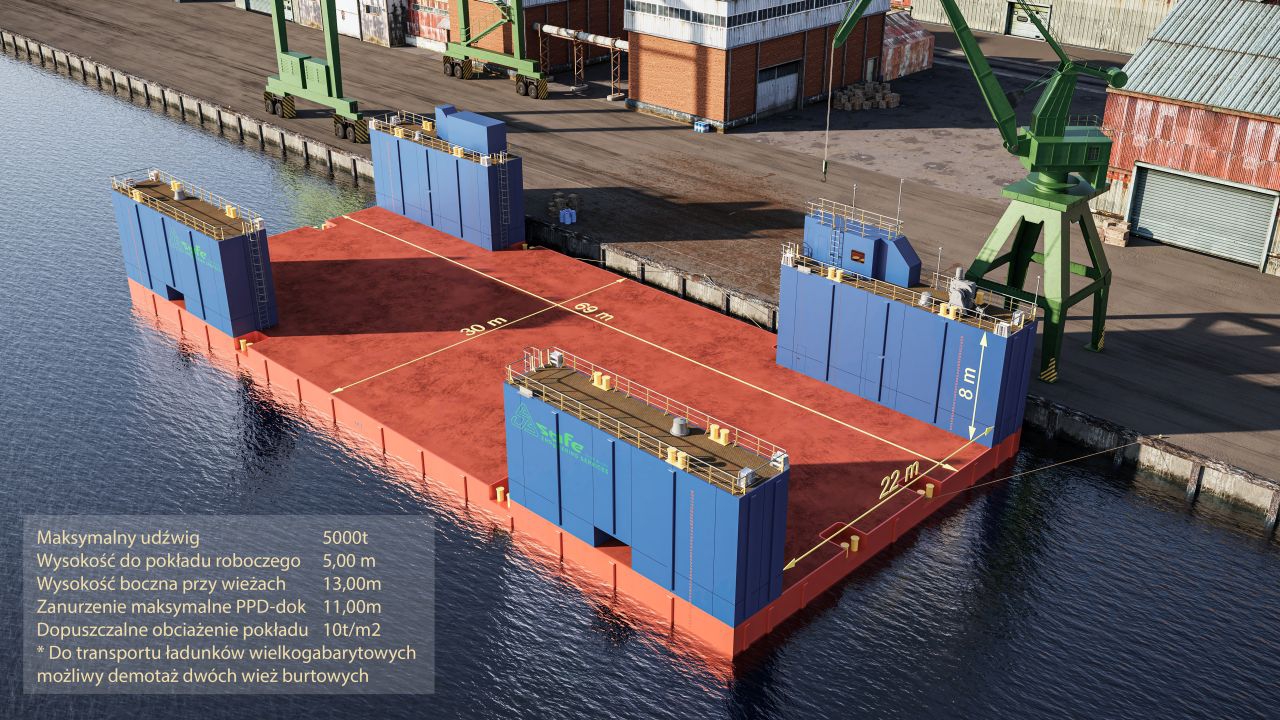 The PPD is also equipped with a specialized unloading ramp adapted to quays with a low load capacity of up to 2 tons per square meter. The side height of the pontoon (5 m) allows you to pick up cargo from virtually every wharf in the country, regardless of the direction of the tides and the water level.

- We should remember that environmental protection and more and more rigorous water protection regulations increase the costs of services. Therefore, it will be more convenient and cheaper to perform some of our tasks, e.g. repairing ships or other floating objects - on land, in the hall. And this will reduce emissions to the atmosphere, environmental contamination and cut off from other inconveniences - emphasizes the president.

Another advantage of PPD is the ability to load an object that exceeds the dimensions of the pontoon.

- Two side towers of the pontoon-dock can be disassembled. They can be lifted and without it there's a pontoon which is 70 meters long on the working deck. Nevertheless, our vessel can be loaded with a much longer structure - ensures Marek Siemaszko. 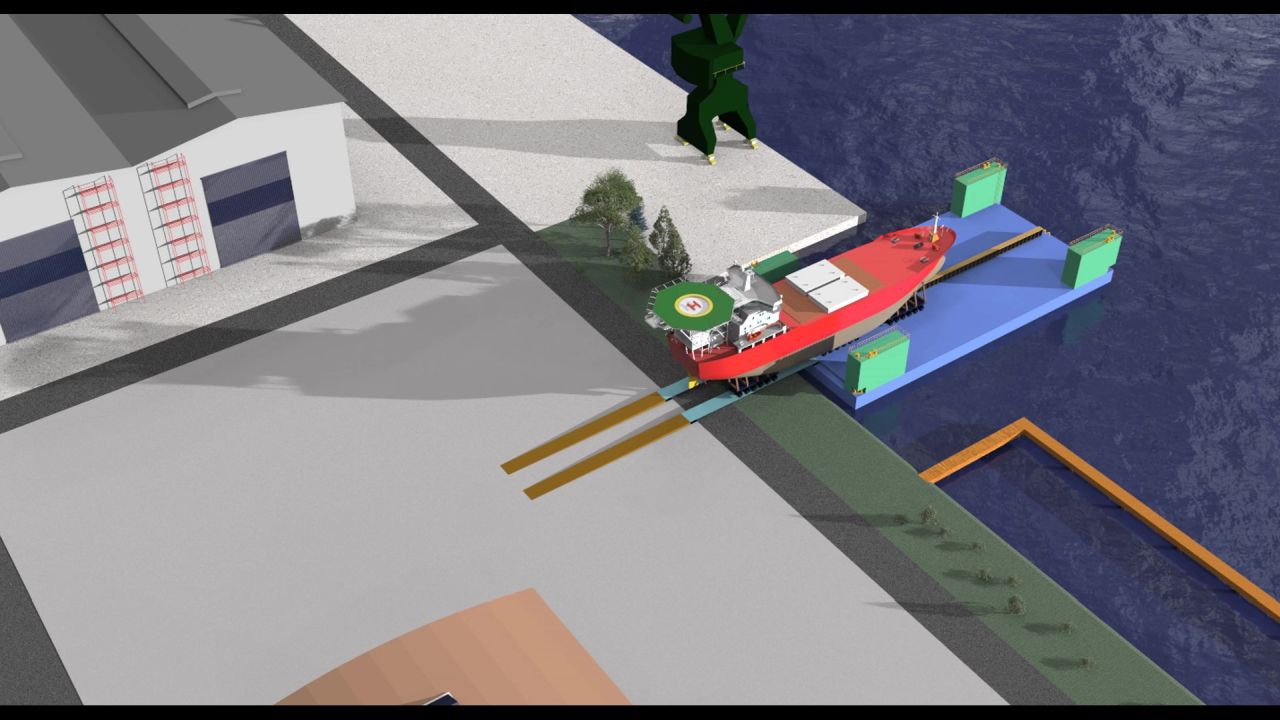 In the case of handling loads exceeding 5,000 tons of total weight and significantly larger dimensions than the current PPD size, it is possible to increase the displacement and area of the PPD working deck through its modular expansion.

- The transport functions of the PPD enable it to be seaworthy in both water and wind conditions up to 5 on the Beaufort scale, and the navigation range is 200 nautical miles from the port. So we can deliver the cargo to the customer anywhere in Europe - says Siemaszko.

- The vessel does not have its own drive, which makes it cheaper. We assume in advance that it would be pushed or towed with other power units. However, it has its own engine room, so its immersion can take place anywhere it will be towed - he explains.

An integral part of the project is the development of an IT solution, an algorithm that will guarantee continuous monitoring of the process of handling loads, as well as monitoring data needed to control the ballast system of the pontoon-dock. At the same time, you can monitor what is happening at the junction of the quay, land, and the pontoon. 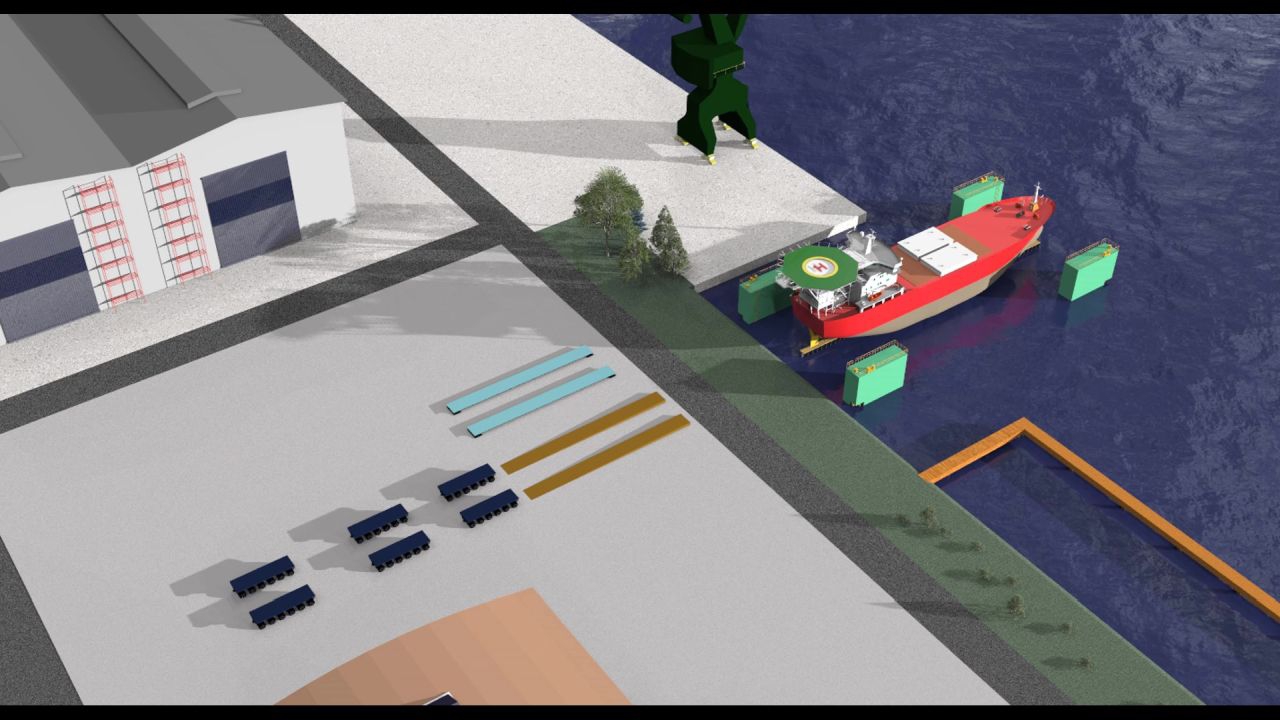 The algorithm will also allow you to plan the finances associated with the operation.

- We are talking about planning and valuation, which will be included in intelligent software - emphasizes Krzysztof Koniuszaniec, manager of the EU project at Safe. - The algorithm therefore guarantees the safety of planning and the entire process. - With this solution we want to improve the entire tool, which will translate into the buyer's trust, and at the same time to dispel the doubts of insurers who have to reinsure the entire process - he adds.

Getting ready for offshore. "Contractors will receive an appropriate tool"

Marek Siemaszko announces that the PPD platform can be used to perform transport and reloading services for the offshore sector.

- We are discussing many possibilities in connection with the development of offshore wind farms. Invariably, we lack the option to "consume" local content. An example is hydrotechnical construction, e.g. protective breakwaters or service quays. It would be worthwhile for Polish companies to be selected for such tasks, and not foreign ones, as is often the case now - he says. 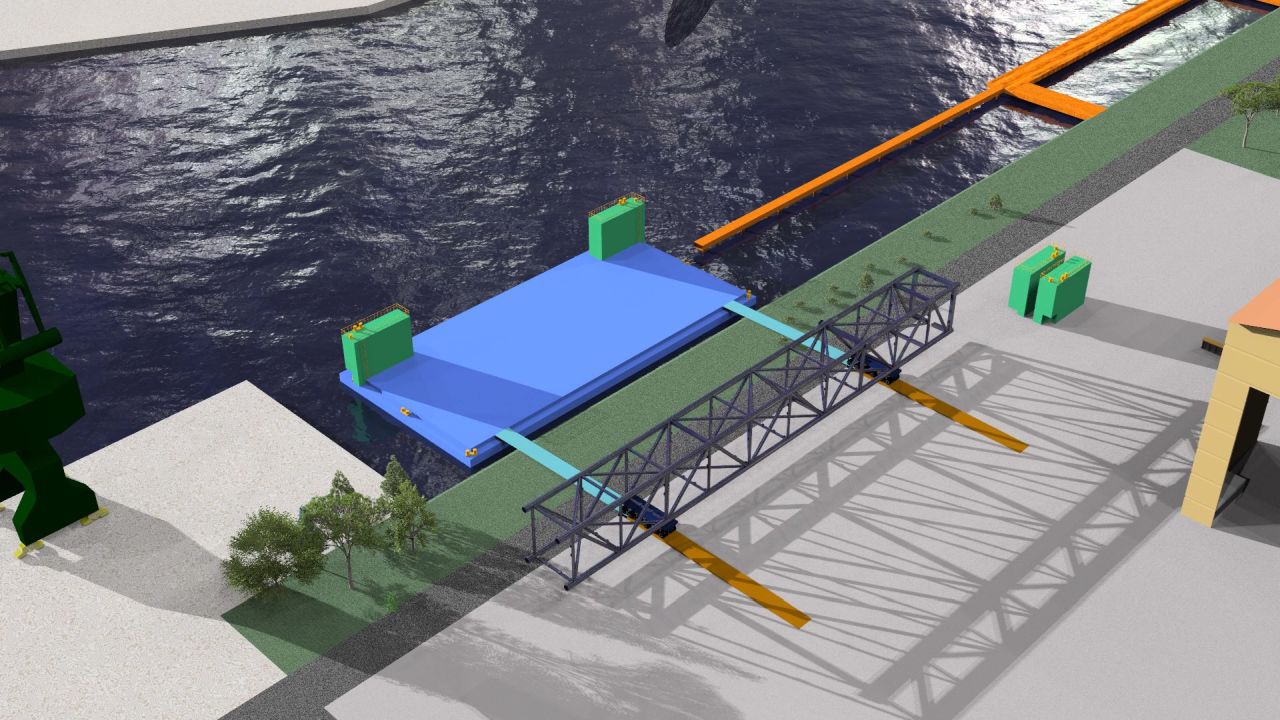 As an example, he mentions the project of protective breakwaters in the eastern part of the Northern Port in Gdańsk, where it was necessary to build caisson boxes and place them in the Bay of Gdańsk.

- To perform this type of operation, a device with smaller abilities than the one we are currently building was used. And what's more - imported especially from Spain. We hope that we will not have to look that far in the future, and we will fill the gap. Polish companies that are candidates for the role of general contractors for offshore will have the necessary tool - says Siemaszko. - And there will be a lot of it in the coming years: the Outer Port in Gdynia, the Central Port in Gdańsk, expansion of the terminal in Świnoujście, construction of hubs in Ustka, Władysławowo or modernization of other ports, such as Darłowo.

The shipyard asked Wuprohyd for a professional expertise in the use of the device in the aforementioned technological processes.

- It turned out that the result of this study exceeds our expectations - says President Siemaszko. - it shows many advantages of using a pontoon-dock for this type of investment in hydrotechnical infrastructure, but one of the key ones is time savings, shortening the construction period of this type of facilities from 10 to 25 percent. It also causes more than 10 percent financial savings. The numbers speak for themselves - he explains.

- On the basis of the conducted analyzes, it can be concluded that the use of PPD in the implementation chain of planned hydrotechnical structures is a very important element for accelerating their implementation, also increasing the so-called "Local content" - he acknowledges.

At what stage is the work of Safe engineers today?

As the shipyard informs us, the project has already been approved by the classifier, i.e. the Polish Register of Shipping, and the production of parts of the structure is in progress. On the other hand, the process of manufacturing the pontoon-dock itself was estimated at 12-16 months. Then the facility would be ready for trials.

For the implementation of the floating docking platform project, the shipyard received funding from the National Center for Research and Development under the Intelligent Development Operational Program 2014-2020 Division 1.1.1. Industrial research and development work carried out by enterprises in the amount of 40 percent eligible costs.