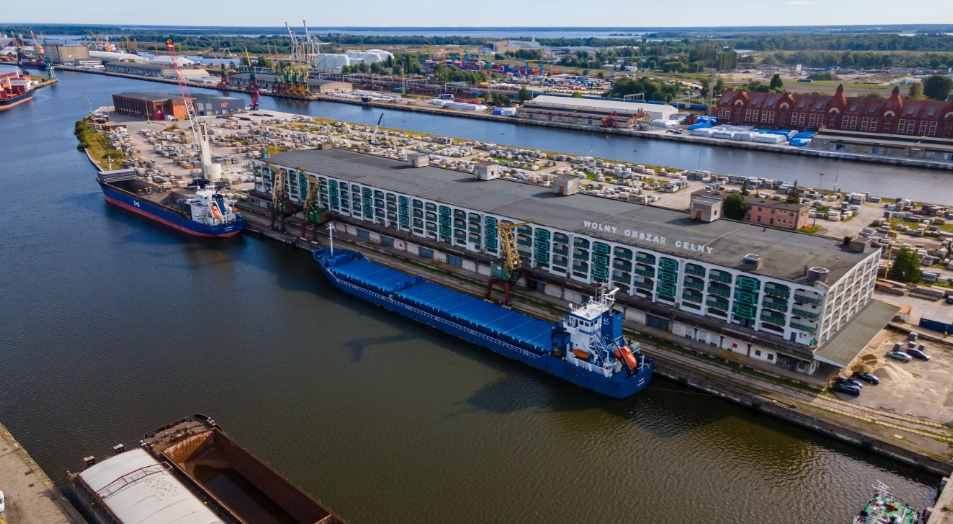 Seaports, Shipping, Logistics
Port of Szczecin summed up the year 2022

Port of Szczecin prepared a list of its most important events in the year 2022.

Finish of the parking investment at ferry terminal in Świnoujście

A new, 278-stays parking for trucks was opened The Ferry Terminal in Świnoujście. That was the end of the investment of the Ports of Szczecin and Świnoujście Authorities S.A. The initiative worth over 30 million PLN was carried out in project and construct formula by PRO-TRA BUILDING Sp. z o.o. from Wrocław. The project was cofinanced with EU funds CEF "Connecting Europe" programme.

Port of Szczecin and Świnoujście Authorities S.A. organised a collection of items (cosmetics, cleaning agents, arts and crafts accessories for children). Additionally, the company resigned from taking port fees from Ukrainians travelling by ferries from Scandinavia, as well as their cars and humanitary help for Ukraine.

Senators from the National Economy and Innovation Committee and the Environment Committee watched the work of the ports in Szczecin and Świnoujście as part of a two-day study visit.

On June 29-30, the 9th International Maritime Congress took place in Szczecin. Coal and LNG as a priority Due to the energy crisis in Europe, coal and LNG have become priority cargoes in the Szczecin-Świnoujście port complex.

The Ports of Szczecin and Świnoujście Authorities S.A. have activelly participated in improving the situation in the region from the very beginning. Port's fire brigade put up barriers and fished the dead fish. The port carried out a contant monitoring, continuously measuring the quality of port waters carried out by Port Environmental and Labour Health Laboratory.

The Russian Quay in Szczecin port changed its name to Ukrainian Quay. This was an effect of an resolution of the Szczecin and Świnoujście Seaports Authority - the owner of the area - was adopted by the City Council of Szczecin, whose competences include, among others, matters concerning the names of streets, squares and quays.

During an official press conference held on the German Quay of the Szczecin port a lease agreement was signed between the Port of Szczecin and PKN Orlen. The document concerned the construction of the first in Poland and one of the world's most modern installation terminals for offshore wind farms in the port of Świnoujście. An addition to the investment will be a turbine factory raised by Vestas in Szczecin. The installation will be built in the area of 20 ha of a former repair shipyard in Śwonoujście bought by port authorities in 2021. The agreement for the investment was signed in Szczecin port by the president of PKN Orlen, Daniel Obajtek and the president of the Ports of Szczecin and Świnoujście Authorities SA, Krzysztof Urbaś.

For the 7th time the Honorary Blood Donation Club operating at the Ports of Szczecin and Świnoujście Authorities SA organised a blood donation. Port employees have already donated 102,33 litres of blood. Last year's action attracted a record number of volunteers – 43 persons. 37 out of them were able to donate. As a result, 16,33 litres of blood were collected.

Once again, Szczecin and Świnoujście Port Authorities was awarded "Equal Company 2022" title in a contest of socially responsible companies. The jury, which consisted of members of business and academic world, awarded the Port for its children support and organising "Port Days at School".

"Strażak-28" ("Firefighter-28") has been added to the fleet of firefighting ships that ensure the safety of the Szczecin-Świnoujście ports. The modern unit was built at the Remontowa Shipbuilding S.A. shipyard in Gdańsk. The vessel was christianed in Mikołajki on December 6. "Strażak-28" will be the third in the fleet of ZMPSiŚ S.A. Currently, "Strażak-24" is moored in Szczecin, and "Strażak-26" in Świnoujście.

In 2022, port operators working in Szczecin-Świnoujście ports serviced over 36,7 million tonnes of reloads in 2022. This means the port noted a 11% gain in comparison to 2021. In 2022, in the port there was more coal, copper, fuels and LNG.

The Ports of Szczecin and Świnoujście Authorities SA has a strong CSR side. The company has been supporting young sportsmen over the years – sports groups operating at schools and sports clubs. It also supports art and cultural events. Moreover, through the regular organization of port blood collections, Ports Authorities spread the idea among eighteen-year-old youth in schools in Szczecin. In turn, through the educational initiative entitled "Days of the Port at School" promotes knowledge in the field of maritime economy and the functioning of ports. This year, the Company and its employees were very much involved in helping Ukraine, for which they were awarded the title of "Donor of the Year 2022" by the Polish Red Cross. The same title was awarded to the Port Fire Brigade.