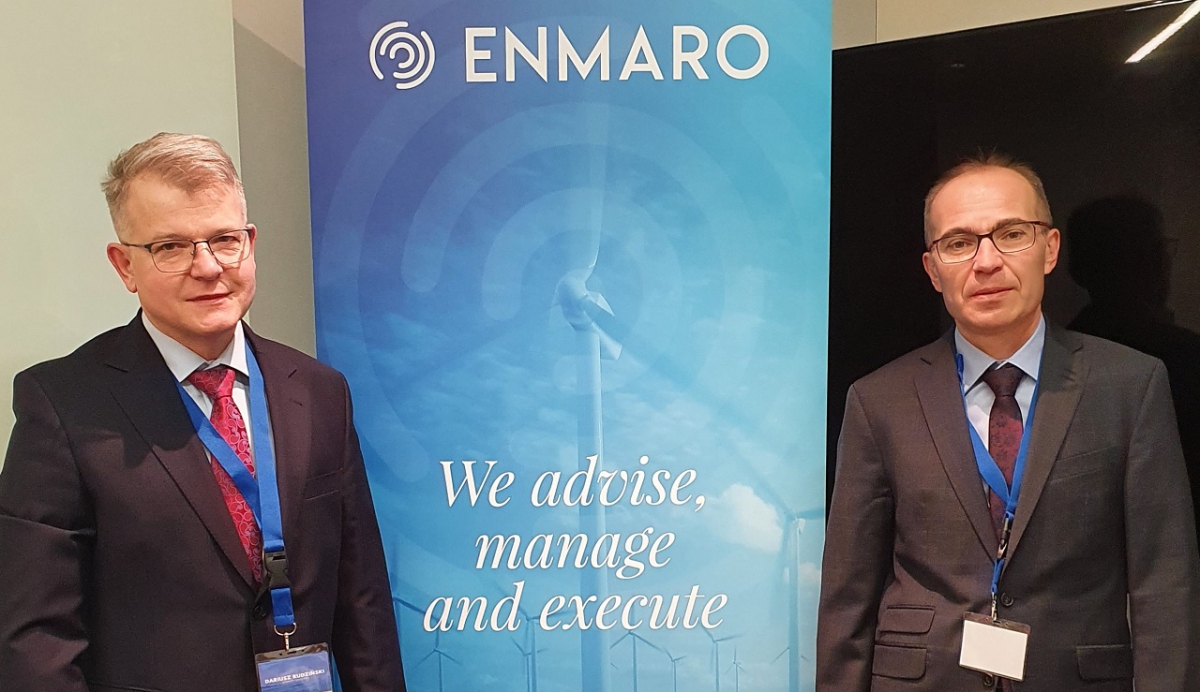 Offshore, Offshore Wind
Who is who in Polish offshore? Enmaro: We support offshore wind and green hydrogen

Enmaro is one of the Polish companies working in offshore wind sector, operating also outside Poland. With the development of RES, the demand for green hydrogen services increases. Enmaro sees opportunities also in the LNG sector. Why? We invite you to read the next story in the series “Who is who in Polish offshore?”. MarinePoland.com's questions are answered by Dariusz Rudziński, Enmaro's Commercial Director.

Enmaro, actually Energy Market Observer Sp. z o.o. is a consulting company providing advice at every stage of the development of an investment project, from conceptual assumptions, through the selection of project contractors, environmental and financial assessments, development of the implementation schedule, market analysis of potential contractors and suppliers and their selection, construction and installation process from operation, repair and maintenance to disposal and recycling strategies.

Our mission is to provide the market with the highest quality services that help investors achieve the assumed parameters in the implementation of their projects, both technical and economic. We are committed to maintaining the durability of the projects, as well as ensuring a competitive advantage to our clients – adds Rudziński.

Poles with extensive experience in the offshore wind sector

The representative of Enmaro informs that the company conducts training, analytical and consulting projects for leading developers in the growing offshore wind market in Poland. - Recently, we have been involved in the preparation of applications for a permit to erect and use artificial islands of structures and devices (PSZW). The implementation of the construction of an offshore wind farm requires obtaining appropriate location permits. It is worth noting that the permits are issued by the maritime administration on the basis of the provisions of the Act of March 21, 1991 on the maritime areas of the Republic of Poland and maritime administration - he explains. - Our training projects, as well as advisory projects, cover the entire life cycle of the OWF - from its initial outline to end of operation and decommissioning. We pay particular attention to the need to assess the risk for critical stages of OWF development – adds the representative of Enmaro. Hydrogen and LNG offer opportunities and possibilities In addition to offshore lifts, Enmaro considers the development of green hydrogen production, transport and storage technology (Power to Hydrogen - P2H), or more broadly – energy storage, to be important.

–  The analyses carried out by Enmaro support developers and thus facilitate the final investment decision regarding the possible method of energy storage. Considering the accumulation of OWF connections to the National Power System (NPS) and the NPS capacity expected in the second half of this decade, it is worth considering and planning what to do with the excess energy that occurs in the event of strong winds. In the development plans for 2023-2032, Polskie Sieci Elektroenergetyczne S.A., the operator of the electricity transmission system in Poland, directly indicates the use of hydrogen production installations as key to the stability of the system – explains Rudziński.

At this point, it is impossible to overlook that February 2022 was the windiest month since the beginning of wind statistics in our region.

The offshore wind farms operating in Europe recorded record results of energy production in this period - he adds. Enmaro has been involved in the implementation of many offshore projects in Asia, Africa, Europe and Australia. - We use the experience gained in the process of green transformation in the country. We see the potential for the development of OWE in the Baltic states. We also find the Middle East region interesting. However, before the potential of renewable energy sources allows us to move away from fossil fuels, and because of the war in Ukraine and its consequences, including sanctions imposed on Russia, we suppose that oil and gas extraction projects in many places around the world will gain momentum. Thus, the demand for LNG transportation and the possibility of its regasification will increase. A new specialized fleet will be needed to support these strategic projects. These are potential areas in which Enmaro sees opportunities for its further development – he continues.

The market is observing an increase in the pace of implementation of offshore wind projects, for which Contracts for Differences (CFDs) were awarded under the support system in the first half of 2021.

For Enmaro, this means an increase in the demand for our specialized consulting services. Moreover, there are only three years left until the auction phase. Therefore, we are constantly expanding our team to fulfill our obligations in a responsible and professional manner. Due to the fact that Enmaro is a company with Polish capital, founded by Poles, we particularly care about cooperation with national experts who have gained experience in the offshore wind sector in the implementation of projects in various locations around the world. We do not, however, avoid cooperation with recognized experts from abroad, because we highly value their knowledge and contribution to the development of the offshore wind market in the world – says Rudziński.

He adds that they will continue to put a strong emphasis on research and development focused on P2H, P2X and other energy storage methods. Without progress in this matter, achieving stability of the power system based on RES will be difficult or even impossible to achieve.

– In the second half of this year, we plan to start a series of seminars dedicated to selected issues related to the investment process – the construction and operation of an offshore wind farm – says the Enmaro representative.