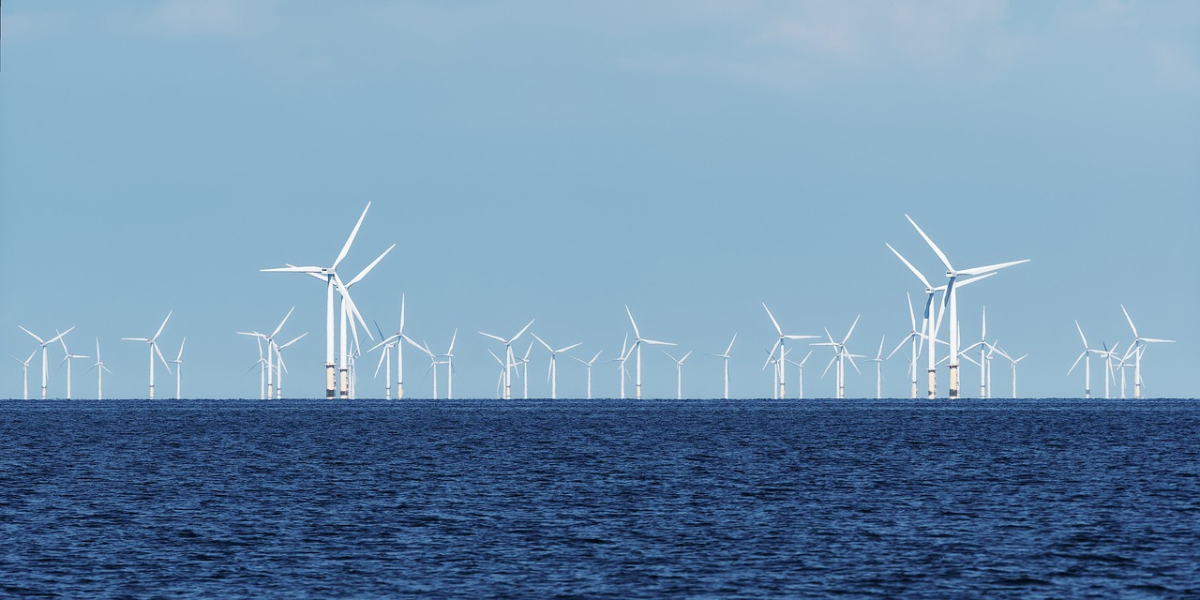 Offshore, Offshore Wind
Who is who in Polish offshore? PGE: We are conducting intensive work in the field of procurement procedures

Offshore wind energy is an opportunity not only to decarbonise the Polish energy sector, but also companies whose portfolio is based on coal. PGE Polska Grupa Energetyczna is the largest producer of electricity, which has focused on investments in renewable energy, including offshore winds in the Baltic Sea. In the text from the series "Who's Who in Polish Offshore", we ask the Polish company about the progress in the development of maritime projects. PGE carries out intensive work in the field of procurement procedures to obtain the main components and secure the installation fleet.

PGE provides electricity to 5 million recipients in Poland, mostly generated on the basis of coal-fired units. The Group's portfolio also includes renewable energy installations. The company has 17 wind farms, 5 photovoltaic power plants, 29 run-of-river hydroelectric power plants, 4 pumped storage power plants, including 2 with natural inflow (as of September 30, 2021). In just a few years, PGE's resources will also include offshore wind farms. Let us recall that on October 19, 2020, PGE Polska Grupa Energetyczna published the Group's Strategy until 2030 with a perspective until 2050. The company presented the Group's transformation plan and the way to decarbonise production, and announced the goal of achieving climate neutrality by 2050.

- Our long-term strategic goal is to achieve in 2050 the point, when 100 percent of the energy sold by PGE was coming from renewable sources. Our customers expect energy produced in an environmentally friendly manner. That is why we will implement an ambitious program of building offshore and onshore wind farms and photovoltaics. We will also be looking for acquisition opportunities for new renewable projects - said Wojciech Dąbrowski, President of the Management Board of PGE Polska Grupa Energetyczna, during the conference.

The spokeswoman for PGE Polska Grupa Energetyczna, Małgorzata Babska, in the commentary for MarinePoland.com, explains that the PGE Capital Group, through PGE Baltica, is currently implementing three offshore wind farm projects, which are Baltica 1, Baltica 2 and Baltica 3. The PGE Baltica company was established in January 2019, as the entity responsible for the implementation of the Offshore Program in the PGE Capital Group. 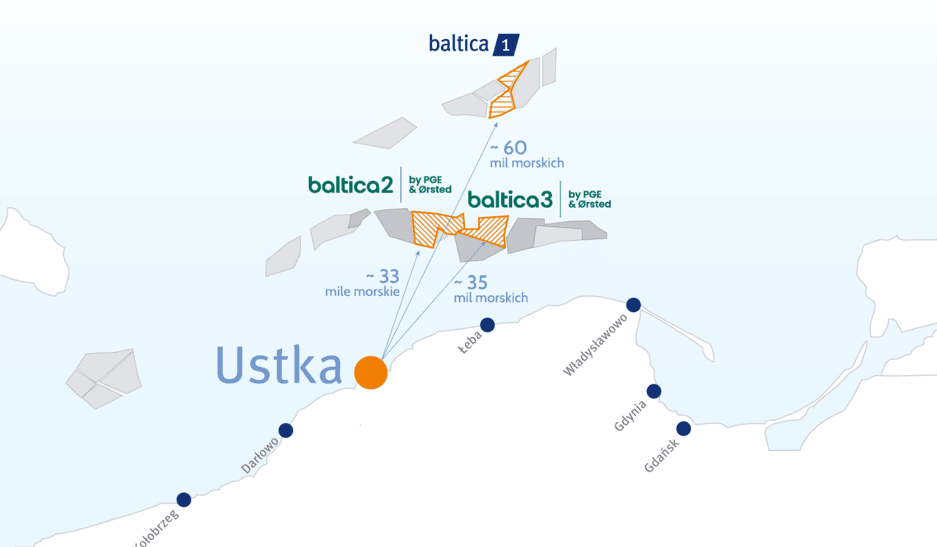 - The PGE Group's Offshore program provides for the construction of the Baltica Marine Wind Farm by 2030, implemented in two stages - Baltica 2 and Baltica 3, with a total installed capacity of up to 2.5 GW. Then, after 2030, Baltica 1 Marine Wind Farm with a capacity of approx. 1 GW will join the Group's portfolio. In November 2021, PGE Polska Grupa Energetyczna signed with Enea a conditional agreement for the sale of shares in three project companies and a conditional agreement for the sale of shares in one company with Tauron Polska Energia, whose task will be to obtain location permits for the construction of offshore farms in the Polish Exclusive Economic Zone in the Baltic Sea. The long-term development vision of the PGE Group in the offshore area assumes having at least 6.5 GW of capacity in this technology by 2040 - says Babska.

Purchase procedures, recent administrative decisions and research in the area of investments

The PGE spokeswoman informs that the most advanced are the works on the Baltica 2 and Baltica 3 projects, which the company jointly with a business partner, Danish company Ørsted.

- We are currently applying for the last administrative decisions for these projects. At the same time, according to the provisions of the so-called the offshore act, we are in the process of determining the final level of support. We also conduct intensive work in the field of procurement procedures to obtain the main components and secure the installation fleet - indicates Małgorzata Babska.

She adds that the main field work currently underway is in the sea-to-land and inland drilling zone.

- For the onshore part, 40% of the work, tests at the site of the planned cable tray and onshore transformer stations, was done. The remaining studies will be performed in 2022. This stage will be the basis for the design of the cable tray and onshore transformer stations. Geotechnical works are being carried out in order to identify the geology of the bottom of the Baltic Sea in the area of the investment - informs the spokeswoman.

All the works carried out so far onshore and at sea are the basis for gathering the necessary information for the next planned stage, i.e. the stage of designing structures, such as foundations for wind turbines or power stations, and future cable routes.

Let us also recall that representatives of PGE, PGE Baltica and the City of Ustka signed a letter of intent in October 2021 regarding the possibility of creating service facilities for the planned offshore wind farms at the Sea Port in Ustka. At that time, PGE informed that the location of the port in relation to the planned wind farms, its size, good navigation conditions, availability of investment areas, as well as the positive attitude of the city authorities and the port authorities towards the planned project, spoke in favor of this location.

To what extent has PGE managed to engage Polish companies in the development of offshore wind projects so far? The spokeswoman reminds that the PGE Group has signed the Sector Agreement for the Development of Offshore Wind Energy in Poland (Polish Offshore Wind Sector Deal). The agreement was concluded by representatives of the government, offshore investors, companies forming the supply chain for offshore wind energy, industry organizations and representatives of the world of science. The aim of the cooperation is to undertake joint activities for the development of offshore in Poland and to maximize the participation of domestic suppliers in the construction of the new energy sector.

- Pursuant to the signed agreement, the parties will take steps to achieve the goals of Poland's Energy Policy until 2040 and to implement strategic goals regarding the pace and directions of development of the OWE sector in Poland. This mainly concerns the implementation of the support system for offshore wind farms and the achievement of local content in the offshore supply chain at the level of 20-30%. for projects implemented under the first phase of the support system - comments Babska.

PGE also announced on February 7 that it had submitted another application to the Ministry of Infrastructure for a new location permit (area 46.E.1.) for the construction of an offshore wind farm in the Baltic Sea. The area is located on Ławica Słupska, in close proximity to the Baltica 2 + 3 projects implemented by PGE in cooperation with Ørsted.

Since November last year, PGE Group has submitted a total of six new applications to the Ministry of Infrastructure for the issuance of location permits for the construction of offshore wind farms in the Baltic Sea, including two with Enea and one with Tauron. 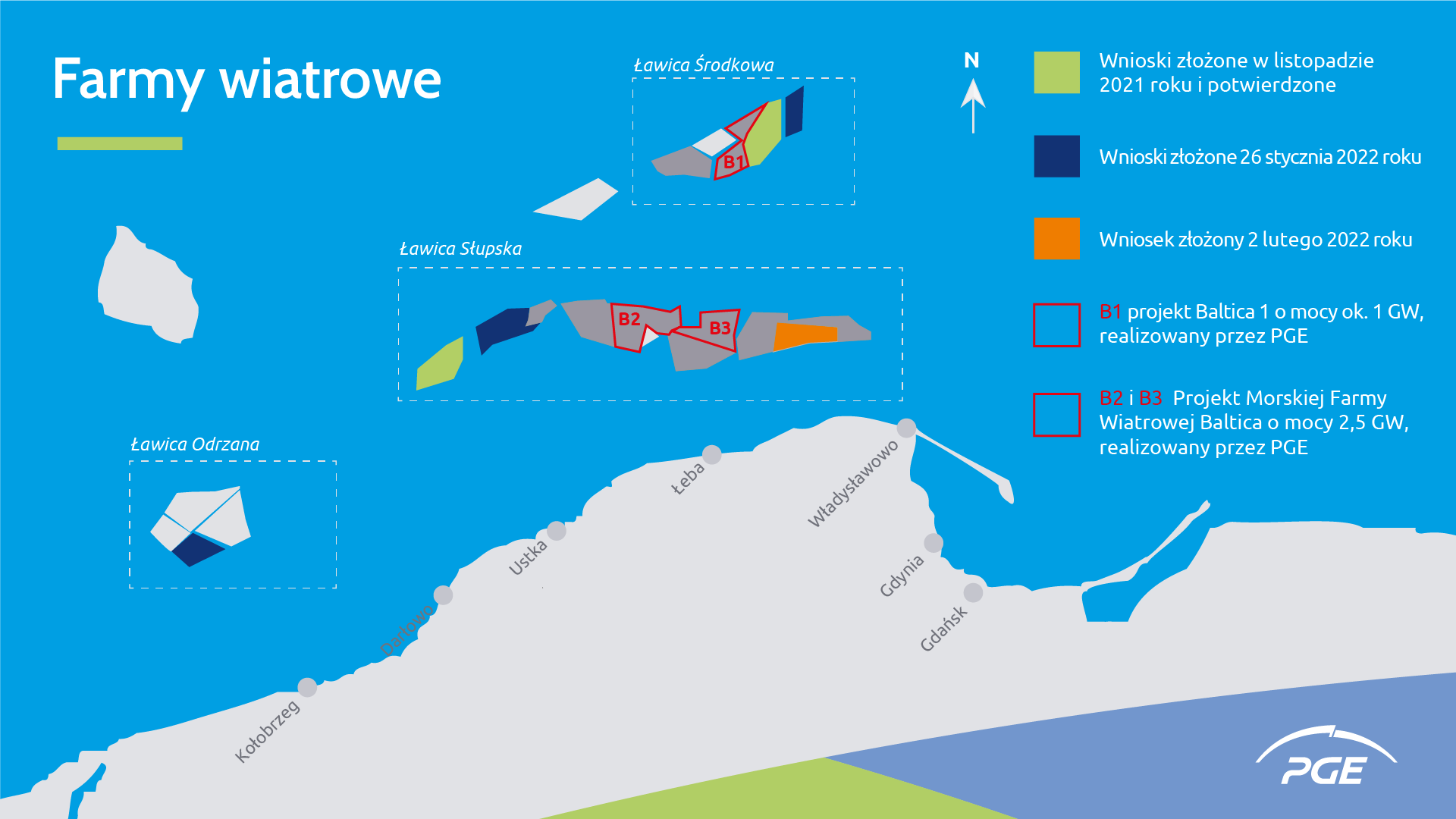 Most recent
PGE and Ørsted are launching a tender for the rental of offshore wind turbine installation vessels for OWF Baltica
2022-01-30
PGE and Ørsted are looking for a contractor for a construction project for Baltica Offshore Wind Farm
2022-01-18
Who is who in Polish offshore? Ørsted: Poland is a strategic market
2021-12-23
Who is who in Polish offshore? Ocean Winds: "We are preparing to apply for new offshore wind locations"
2022-02-15
SHOW MORE
Meet innovative companies from Poland
SHOW