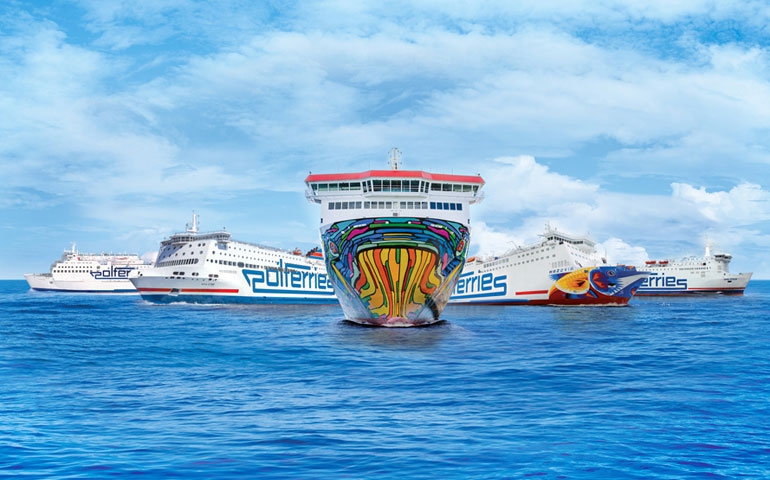 Seaports, Shipping, Logistics
A contract has been signed for a new ferry for the Polferries

Deputy Infrastructure Minister Marek Gróbarczyk announced that the contract for a ferry for Polska Żegluga Bałtycka has been signed. The vessel is to „fill the investment gap” until new ferries are built.

Polska Żegluga Bałtycka (Polish Baltic Shipping Company, Polferries) received funding of PLN 140 million from the state budget to "fill the investment gap in the replenishment of tonnage in 2023 until new vessels enter service."

- A contract has been signed. In this way, the new ferry has been secured for the shipowner (...) This is to secure the interests of the Polish Baltic Shipping Company (Polferries) within the framework of its operation on the Baltic lines, and, above all, to increase its competitive capabilities, because for us the fundamental thing is that precisely the PBSC, as the second largest Polish shipowner, should carry out the program of renewing its fleet, and thus strengthening itself in the Baltic Sea – said Marek Gróbarczyk, Secretary of State at the Ministry of Infrastructure, at a press conference in Kołobrzeg.

He added that the Świnoujscie-Ystad or Gdańsk-Nynashamn lines are crucial "as part of our dominance and, above all, our competitiveness in the Baltic Sea." He assured that "maximum efforts" will be made to strengthen Polish shipowners.

PŻB President Andrzej Madejski conveyed that an agreement with the shipowner has been signed to charter the vessel with a buy-back option. The vessel is to be 216 meters long, 28 meters wide and have more than 3 km of cargo line. The ferry will be able to carry a thousand people in 230 cabins.

- In addition, the vessel will be powered by conventional propulsion (...) And the most important news - it will be adapted for dual fuel propulsion, with LNG as fuel - Madejski said.

He added that the ferry is expected to be delivered to the PŻB in the second half of 2024. - The vessel will still need to be retrofitted with a LNG installation, which will already fully meet the technical requirements for gaseous fuel propulsion - he pointed out.

Asked about the costs, he replied that these are classified data. The contract has been signed with an Italian shipowner, the vessel is being built at the Visentini shipyard. He added that the ferry will operate on the Świnoujscie-Ystad line.

- Negotiations took quite a long time, because in deciding that we would charter this ferry we also obtained the possibility of technical negotiations, so it will be tailored to our needs - Madejski said.

He added that the ferry is chartered for 10 years, and will be redeemable after six years.

Most recent
Stena's new ferry will set sail from Poland in September
2022-08-17
Officially: Euroafrica has a new ferry
2022-06-13
The contract for the construction of ferries for PŻM and PŻB has been signed
2021-11-29
Świnoujście - modernization works at the ferry terminal are underway
2021-10-21
SHOW MORE
Meet innovative companies from Poland
SHOW