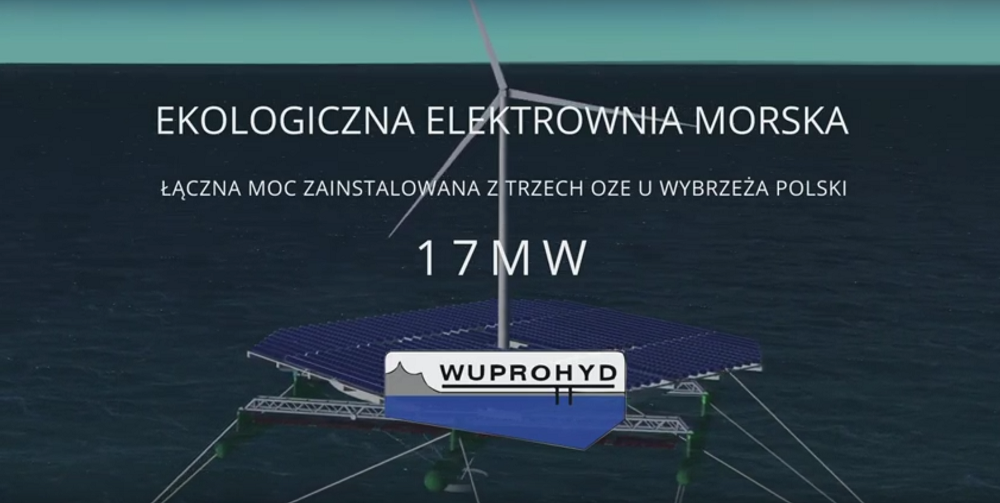 A few years ago, a group of Wuprohyd engineers joined forces and the innovative project of an Ecological Offshore Power Plant Using Energy From Three Renewable Energy Sources was created.

The two basic factors for the creation of the project, as said Piotr Cieślak, the President of the company, are:

The turbine and energy island projects have been patented and constitute a huge innovation on the offshore energy market, and thanks to the use of three renewable energy sources in one place, they meet the Green Deal. The sun, wind, and waves are the three energy sources of the Floating Isle of Wuprohyd.

In the Baltic Sea the average parameters of deepwater wave are one of the lowest in the world, and the energy is 10kW / m of wave crest width. Thus, on a 400 km section of the Polish coast, the energy contained in sea waves amounts to approx. 4000 MW. Engineers found an effective solution and used these harsh conditions to generate energy.

According to the plan, the energy island is a three-hull watercraft with parallel underwater hulls or surface hulls (one central and two side ones) connected with each other by steel trusses. The dimensions in the plan are ~ 250x200 m. The constructors took into account many parameters and designed the island so that, despite its enormous size, it could be easily built in a dock, transported to a destination point at sea and retrofitted there.

An important element is the ability to adjust the structure to the amount of undulations in the area where the unit is to operate. When designing the island, the engineers from Wuprohyd also took into account the economic factor, and in their work they strived to use as few rows of turbines as possible, which will reduce the costs of the project.

It is necessary to mention a very important element of the patent, which is the offshore wind wave converter, which absorbs and changes energy from waves into electricity. The constructors' calculations show that, for economic reasons, it will be possible to consume a maximum of 60-70 percent of wave energy. The structure proposed by the company has already been preliminarily computationally verified and is characterized by a very high stability, also in difficult storm conditions.

The use of three renewable energy sources increases the stability and predictability and reduces the costs of green energy production.

Due to the assumptions made above, about 16.6 MW of power can be installed on one module of an energy island.

Every detail is important, and the most important is environment

Engineers from Wuprohyd conducted tests of turbine models in the wave channel of IBW PAN in Gdańsk. Research is constantly being carried out on the optimization of individual elements in this turbine profile. It will be necessary to conduct turbine tests in nature, but for this more resources will be needed.

The green future of the island's energy

The multifunctional patent of the Wuprohyd design office is one of the most modern energy solutions, using energy from waves, wind and sun, which can be adapted to all conditions. Another advantage is the protection of the seashore and the ecological aspect. The patent was one step ahead of the trend of ecological energy sources.

Wuprohyd is a company with over 30 years of experience, specializing in the design and modernization of existing ports, designing new and reconstructing existing port quays, including increasing their operational parameters, building yacht ports, strengthening the sea shore, and study works.