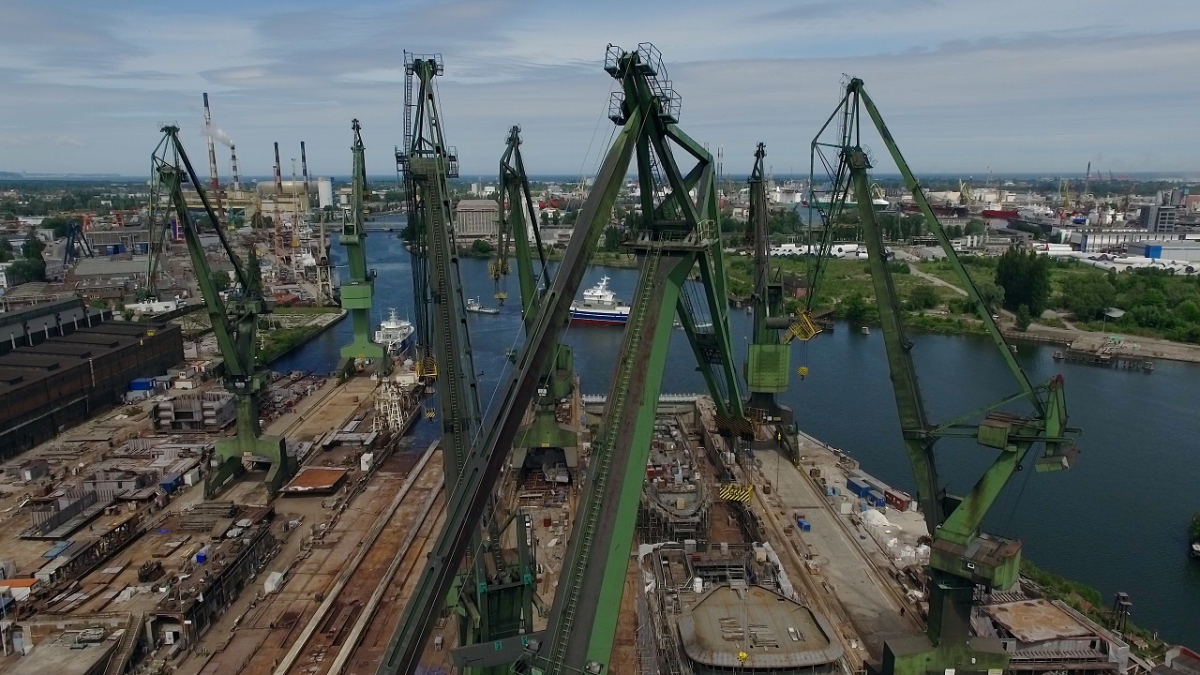 By buying a stake in Synergia 99, Polish shipyard Karstensen has become the owner of a plot of 10.5 hectares, a slipway and seven green Kone cranes, a distinctive landmark of Gdańsk. „The move from Gdynia to the new site will enable us to increase our production potential in a location that has been used for shipbuilding from the beginning. We do not plan to sell the site to developers," comments Tomasz Mulica, Karstensen's director.

Media reports circulating recently about the purchase of Synergia 99 were confirmed in an interview with GospodarkaMorska.pl by the director of Karstensen Shipyard Poland Sp. z o.o., a shipyard that has been operating in the Port of Gdynia since 2018 in a production facility leased from Vistal Offshore.

„I can already say officially that Karstensen Shipyard Poland is the owner of Synergia 99. The finalization of the purchase follows the tender procedure announced by Polska Grupa Zbrojeniowa," confirms Director Mulica.

This means that the shipyard has become the owner of Synergia 99's assets, i.e. the land (10.5 hectares) with slipways, the prefabrication hall and seven Kone cranes.

The shipyard will officially move into Gdańsk from January 1, 2023, because until the end of this year, the company's land is leased by Crist shipyard (even before that, Nauta shipyard's New Construction Plant was based there).

„Working with Crist, we are starting our operations in Gdańsk and are preparing to move to a new location. Already at the new location stands our ship Sille Marie with construction number 471, and we plan to finish it in the near future," he explains.

Tomasz Mulica announces that renovations are planned for the purchased facility. „The first renovation work will focus on improving the social facilities: locker rooms for employees, bathrooms, dining rooms, office space,” he enumerates.

All renovation work, due to the nature of the place and its historical value, will be closely consulted with the conservator of historical monuments.

At the same time, Tomasz Mulica dismissed rumors that the shipyard bought the site only to scrap cranes and sell it to developers in the short term. The location of the plot is peculiar because of its proximity to the Young City project under construction, which is supposed to transform this post-industrial space into an urban fabric.

„In fact, the opposite is true. The location in Gdańsk will help us increase our production potential. Unlike the plant in Gdynia, here we have our own slipways from which we will launch our projects as well as a wharf where finishing work can continue," he stresses.

„Since our presence in Gdynia, that is, since 2018, we have built 25 vessels. Our plan for the coming years is to build 5- 6 vessels per year," he announces.

When will Karstensen's production in Gdańsk take off?

Director Mulica says the first work on building new hulls will start later this year, while the move should be completed in June/July 2023.

„This means that for part of that time we will be operating both in Gdynia and Gdańsk. We will move some construction started in Gdynia to the new location.”

The Danish Karstensen Group has been present in Gdańsk since the 1990s. It signed its first contracts for the delivery of hulls with Polish shipyards between 1995 and 1997 (Cenal Shipyard, Northern Shipyard, Stal-Rem).