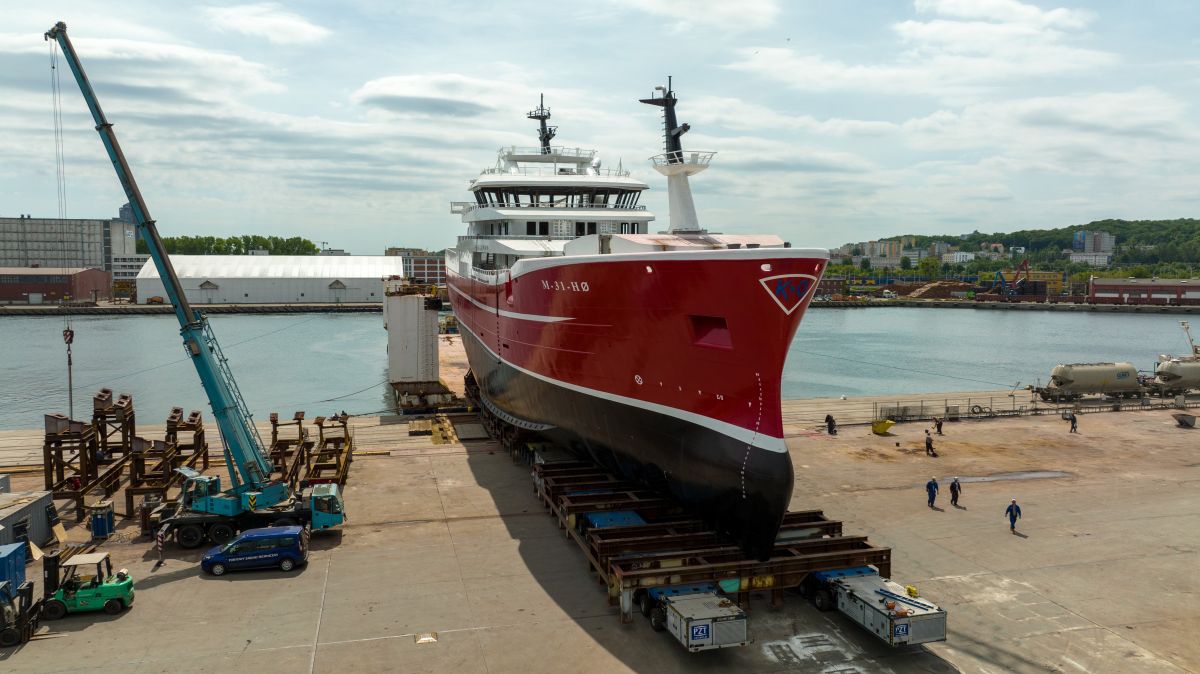 More fishing vessels have been launched in recent days at the Karstensen shipyard in Gdynia. These are Gollenes (construction number #468) and Stødig (number #467).

The main dimensions of the Gollenes vessel are: 69.99 meters in overall length, 14.80 meters in width, and the draft to the protective deck is 8.30 meters. The construction of this vessel started in August 2021 and the final delivery date of the complete vessel after outfitting in Denmark is March 2023.

The ordering party is the Norwegian company Gollenes AS, which was founded in the 1950s. It is currently managed by Asbjørn Ose and Frode Kvalvik. The vessel Gollenes will be the company's third new vessel and will replace the current Gollenes, delivered from Karstensen shipyard in 2011. The company operates a combined trawl (partly pelagic) fishery for herring and mackerel, as well as a combined industrial fish and white fish fishery.

- The new vessel will be operated on the same basis as the previous one and is a natural extension of the successful and constructive long-term cooperation - informs Karol Sielawa, Project Manager at Karstensen Shipyard Poland.


- The ordering party put particular emphasis on the optimization of working conditions, safety and comfort of the crew - explains Karol Sielawa. - Unlike the previous vessel, the present one is to have a fully waterproof cargo deck, which will significantly improve working safety conditions. During the design of the vessel, a lot of experience from the company's current vessel as well as from the shipyard's portfolio was discussed and used.

The vessel is equipped with a processing plant, with maximum emphasis on efficient workflow and gentle fish handling. The hull design has been refined with the lowest possible fuel consumption and therefore emissions in mind.

The propulsion system will consist of a 3955 kW ABC main engine with a large, slow-moving propeller, adjusting the exact work profile of the vessel. The system is equipped with a take-me-home function that enables diesel-electric sailing.


- In addition, the vessel is equipped with electric winches, an electric fish pump, a heat recovery system from all engines, LED lighting everywhere and a number of other measures to ensure possible low energy consumption - mentions Karol Sielawa. He adds that Karstensens Skibsværft is pleased with the confidence that Frode Kvalsvik and the rest of the fishing company have shown with this order. Returning customers are invaluable advertising.

Like the other vessels the yard builds for shipowners in Ireland, Scotland, Norway, Sweden, the Faroe Islands and Denmark, the new Gollenes are also of its own design. Karstensens Skibsværft has a total of 14 fishing vessels on its order book with delivery over the next three years.

Construction of the vessel began in October 2021. Its dimensions are as follows: overall length: 39.30 meters, length between risers: 36.30 meters, overall width: 11.50 meters.

- We have built a fishing vessel specially equipped for trawling. The vessel is designed to catch shrimp, redfish and demersal species such as cod, saithe, haddock and single pelagic fishing. The ship's operational areas will be mainly the Norwegian Sea, the Barents Sea and the North Sea - says Marcin Mąka, project manager at Karstensen Shipyard Poland.

The hull of Stødig is constructed of two continuous decks: main deck, shelterdeck and stern working deck. Part of the boat deck is an overhang for the MOB boat deck. The strong hull of the vessel is made of steel. The wheelhouse, signal mast and their locksmith equipment are made of aluminum.

According to Marcin Mąka, for additional power supply, the vessel is equipped with two diesel generators, each with a capacity of 400 kW. The electrical installation is built with the possibility of parallel operation of 2 diesel generators.

- In addition, the electrical installation is equipped with a Power Management System (PMS), which manages the power consumption and automatic start-up of the generator systems. Such a combination ensures efficient fuel and operational efficiency, with optimum performance of the main engine and high operational reliability at the same time, explains the project manager.

The ship sailed to Denmark on the same day after launching (11 June).

- There it will be finally fitted out at Karstensen Skibsvaerft A/S in Skagen before being delivered to the shipowner - concludes Marcin Mąka.