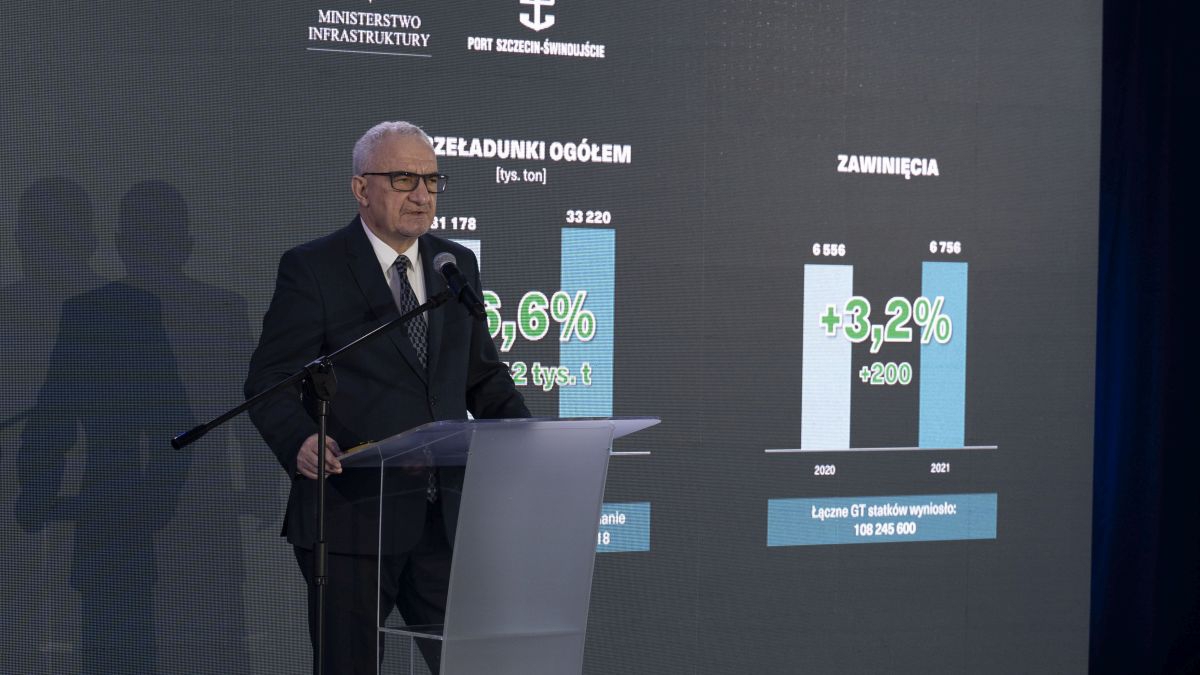 Seaports, Shipping, Logistics
Ports of Szczecin-Świnoujście. 33.2 million tonnes in 2021 is to match the best result from 2018

In the ports of Szczecin-Świnoujście, in 2021 reloading companies handled 33.2 million tons of cargo, thus achieving the record result from 2018. Comparing the year to year data, the result generated in 2021 is 6.6% over better than 2020. The largest share in the turnover was constituted by general cargo handling: 55%.

Ports achieved excellent results of the ferry general cargo, an increase of 10.6% year to year. Over the decade (2011-2021), the Ferry Terminal in Świnoujście increased transshipments by 139%. In the overall structure of transshipments of the entire port complex, as much as 45 % of turnover is carried out by the ferry terminal. In 2021, the TPŚ recorded 3,261 ferry calls.

- We are extremely satisfied that despite the difficult working conditions that we have every day in allports all over the world, we have managed to achieve such an impressive result. I would like to thank all the operators who work in the port, the more so because they are working in the company of major investments in progress. These happen in a living port organism, during transhipments, during ship service - emphasized the president of Port of Szczecin-Świnoujście Authority S.A. Krzysztof Urbaś.

- I would like to bow my head to respect these operators, I will emphasize it at every such meeting and on every occasion, without them, without their commitment, skills and professionalism, we would not be able to present such results - he added.

- The third decade of the 21st century will belong to the Szczecin-Świnoujście port complex, because in 2-3 years we will see a very dynamic and qualitative leap in terms of the volume of transshipments. At the moment, the amount of general cargo has been systematically increasing for the last 3 years in various reloading groups - said President Urbaś. - At the moment, we already handle 55% of this cargo.


2021 - the year of continuation of the investment

Investments are necessary for ports to develop. Today, the ports of Szczecin and Świnoujście are large construction sites. The value of the pending investment package is PLN 1.5 billion.

The port of Szczecin is being adapted to the conditions that will open up in front of it after the Świnoujście-Szczecin fairway is deepened to a technical depth of 12.5 m. Thus, work is underway in the area of ​​the Dębicki Canal and the Kashubian Basin, where the two largest operators operate: DB-Port Szczecin and Bulk Cargo Port Szczecin. After completion of the works, the erminals will be able to service ships with a draft of 11 meters with a load of up to 50,000 tons on board.

Two large investments are under way in Świnoujście. The first is the expansion of the LNG terminal.


- The LNG terminal ensures the energy security of the state. Currently, another station is being built together with Gas-System. At the beginning of next year, our part will be ready, and the entire position will be handed over to the same parameters on which the units are currently serviced - said President Urbaś. - This position will allow the reception of bunkers and reexport in the Baltic Sea basin.

- The ferry terminal is now the apple of our eye, its transshipments in the structure of the entire port amount to almost 45%, and it is the undisputed leader. During the year, we service about 530 thousand trucks - he informed. - Ferries that call us have a total of over 7,200 m of load line. In 2021, we handled 3,261 calls. These numbers speak for themselves. We want to fight for a dominant position, for now in the southern Baltic and perhaps in other areas in the future.

Another very important step in the development of the port complex is the location of a container terminal in Świnoujście.

The planned annual transshipment capacity of the terminal is 2 million TEU. As pointed out by the president, this is an investment that will provide a development impulse not only for Western Pomerania, but for the entire national economy. Currently, the port authority is undergoing a procedure, the culmination of which will be the selection of an investor who will build the terminal and be its operator. There are three companies interested. If everything goes according to plan, we should know the investor in 2022.

- At the moment, a very intensive dialogue is being conducted with the three entities. Last week there were three meetings, there will be more tomorrow. All this proves that not only an idea itself is interesting, but also the fact that all three entities will intensively strive for one of them to be chosen as our partner - said Krzysztof Urbaś.

The port infrastructure is being modernized in both ports. The access infrastructure to ports, including the S3 road and railway routes, is systematically improving.

After the completion of the investment, the competitiveness of the Szczecin-Świnoujście ports will increase significantly compared to other Baltic ports.

Most recent
The ports in Gdańsk, Gdynia and Szczecin-Świnoujście announce the results for 2021 [VIDEO]
2022-01-26
Szczecin and Swinoujscie Seaports Authority acquired terrains from Gryfia shipyard
2021-12-22
Maritime Office in Szczecin. This is where important decisions for ports are made and innovative solutions are created [VIDEO]
2021-12-20
Deepening of the Świnoujście-Szczecin fairway to 12.5 m. The work is progressing [PHOTOS]
2021-10-19
SHOW MORE
Meet innovative companies from Poland
SHOW