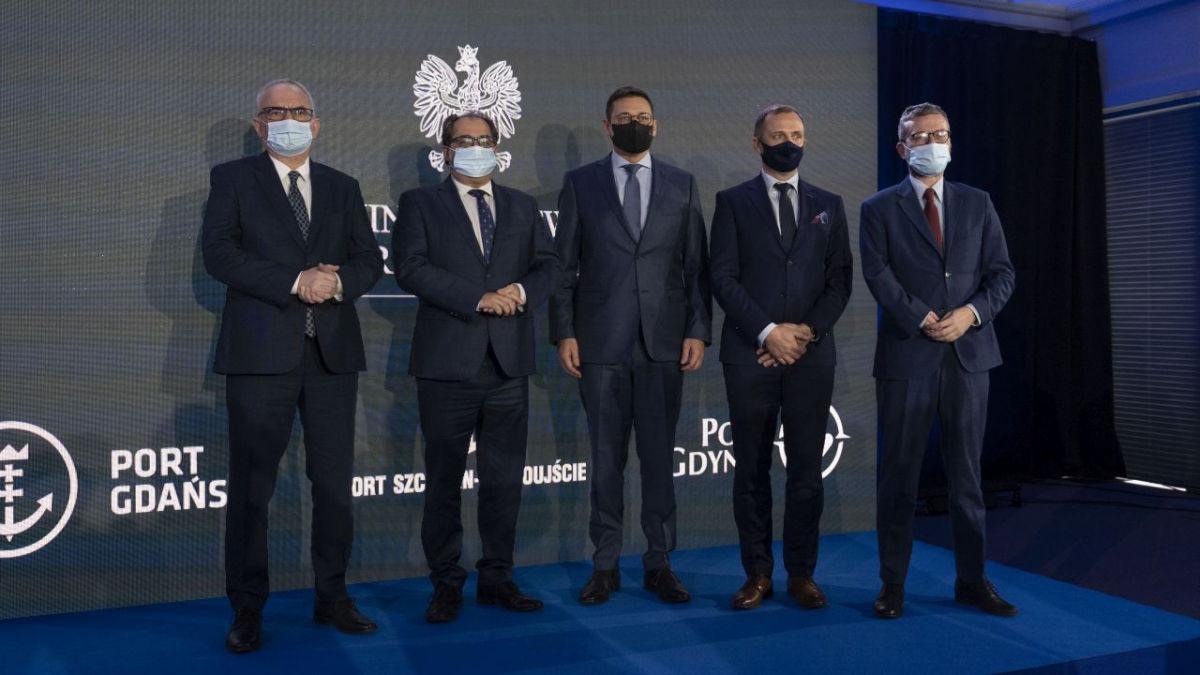 Seaports, Shipping, Logistics
The ports in Gdańsk, Gdynia and Szczecin-Świnoujście announce the results for 2021 [VIDEO]

In the Ministry of Infrastructure in Warsaw, the seaport authorities are summarizing the results for 2021. The conference was attended by ministers Marek Gróbarczyk and Grzegorz Witkowski together with the presidents of seaports: Gdańsk, Gdynia and Szczecin-Świnoujście.

The conference was started by minister Marek Gróbarczyk. He announced that the three largest Polish seaports in the Baltic Sea handled a total of 113 million tons of goods in 2021, which is a record result and by 9% better than in 2020. This means a significant increase compared to the results from previous years - in 2020 it was 103.8 million tonnes, and in the record-breaking 2019 - 108.4. It is also 46% more than in 2015.

Gróbarczyk emphasized that this result was achieved during the pandemic. The minister also thanked the managements of the ports of Szczecin-Świnoujście, Gdynia and Gdańsk and the operators of terminals providing services in the ports.

Gróbarczyk also announced that the DCT terminal in Gdańsk is the largest container terminal in the Baltic Sea. In total, Polish terminals handled over 3 million TEU.

Grzegorz Witkowski, Undersecretary of State in the Ministry of Infrastructure, added that the record results of Polish ports are not a surprise. He also referred to large-scale investments and investment plans concerning the Polish coast.

- We will not spare a single zloty invested in the maritime economy - said Witkowski.

Greinke also announced that the Port of Gdansk is still the third port in the Baltic after the Russian Ust Ługa and St. Petersburg, the latter is already within the reach of Gdańsk.

- We are interested in a place in the top ten in Europe. At the moment we are on the 18th place - said Greinke. He referred to the investments carried out at the Port of Gdansk, which should additionally improve the handling results.

- We matched the best result of transshipments in 2018 - reported Urbaś. - We lacked two holds on a Panamax vessel to break the record.

The largest share in the turnover was constituted by general cargo handling: 55%. The results of the ferry groupage are also excellent - an increase of 10.6% year to year was recorded. Ore and coal transshipments also recorded a double-digit increase, up by 12.2 and 11.8% respectively.

Urbaś reported that the transshipments at the Ferry Terminal in Świnoujście increased by 139% within a decade. It is the most dynamically developing ferry terminal in Poland.

- The terminal is being expanded, this year the longest position in the Baltic Sea will be commissioned. There are plans for another, number 6 - said President Urbaś.

Works related to the deepening of the Szczecin-Świnoujście fairway have been completed. They are accompanied by the construction of new and reconstruction of old quays in Szczecin. Work related to rail services is also underway in both ports. Urbaś also talked about the concepts of building a deepwater terminal. He said that such a terminal should be ready in 3-4 years.

While discussing the increase in general cargo divided into categories, Sadaj recalled the expansion of a new public ferry terminal, which will enable the reception of new, larger ro-ro units.

President Sadaj announced that the increases were driven, among others, by investments. Last year, apart from the new ferry terminal, the investment to electrify rail access to the western part of the port was completed. The extension of the maneuvering and storage yards, which will be used, among others, by for container handling, but also offshore structures, will be done shortly.

Most recent
Szczecin and Swinoujscie Seaports Authority acquired terrains from Gryfia shipyard
2021-12-22
Hydrogen Hub at the Port of Gdynia. There is a consensus and an initial action plan [VIDEO]
2021-12-16
Port of Gdansk. Duty Free Zone is 25 years old [VIDEO]
2021-12-05
DCT Gdańsk has published the Sustainable Development Report for 2020
2021-11-30
SHOW MORE
Meet innovative companies from Poland
SHOW