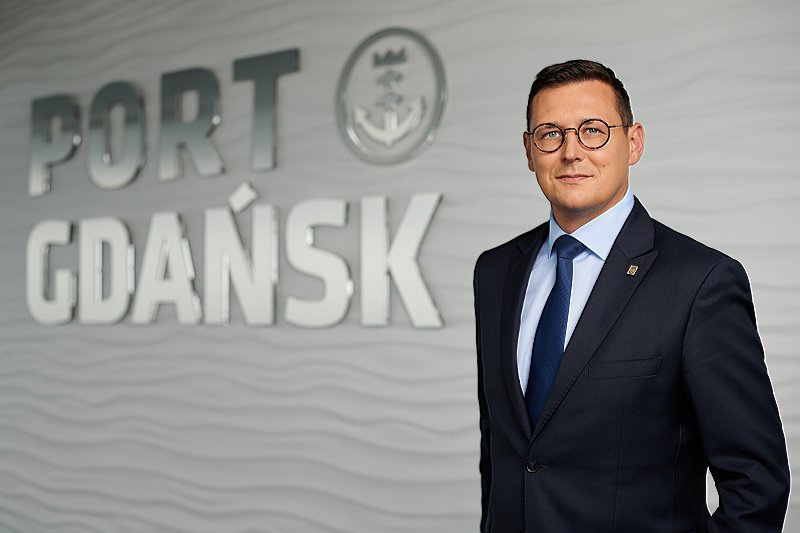 Seaports, Shipping, Logistics
President of the Port of Gdansk: "We help our friends from Odessa. We take care of the continuity of transshipments." [VIDEO]

A conversation about offshore development and construction of installation terminal, the latest investments and port management with Łukasz Greinke, CEO of the Port of Gdansk.

Anna Konopka, MarinePoland.com: Today we talk about investment and development, but at the same time we watch with horror what is happening to our eastern neighbors, the war and the heroic struggle for freedom.
Łukasz Greinke, Port of Gdansk: Port of Gdansk Authority S.A. became involved in aid activities for our eastern neighbors who found themselves in a dramatic situation. We have purchased and delivered to Odessa medical equipment, generators, powerbanks and laptops. The transport set off from Gdansk on March 4th. It arrived in Odessa after two days.
Contacts between Gdansk and Odessa have a very long history and its beginnings date back to the late 90s. In recent years our activity has increased due to plans of creating Gdansk-Odessa transport corridor and signing the letter of intent between Port of Gdansk Authority and Ukrainian Sea Ports Administration regarding mutual cooperation in October 2020.
Since then, the representatives of the ports have been exchanging knowledge and experience to optimize the logistics chains in the future and thus increase the volume of handled goods. We could not be indifferent to their needs. Also our employees joined the aid action and collected donations to help Ukraine. Another shipment of donations is planned soon, this time to Kiev.

Let us talk about your plans, because there can be no downtime at the port, it has to be operational 24 hours a day, seven days a week. In recent days a decision was made on the final location of the installation terminal for offshore wind farms in the Port of Gdansk. This information came as a big surprise to some people. It has been rumored for a long time that the best location would be Gdynia. It turns out that Gdansk reconciles most investors' interests.
We want to meet these expectations, and this can only be done through a public selection procedure. Therefore, the Board of the Port of Gdansk S.A. has passed a resolution to hold a new competition to select a lessee interested in landing the sea within the administrative borders of the port. We have already received a positive opinion from the Supervisory Board and on 8 March 2022 we published the competition proceedings. We will create conditions for the installation terminal to be built in the port of Gdańsk.

The port's good streak continues for a long time. Last year ended with a historic result. What determined it?
This result was influenced by the transshipments of crude oil to our largest customers, i.e. Lotos and Orlen refineries. The result is indeed impressive. More than 6 percent growth compared to the record year 2019 was recorded by Naftoport from the PERN Group transshipping nearly 18 million tons of crude oil and fuels in 2021. Very large increases were also recorded at the DCT terminal, where a record 2.1 TEUs were also handled.

Not everyone is aware of the fact that it is Naftoport Gdansk that guarantees energy security of Poland. In the context of the current political actions and Russia's aggression against Ukraine, this importance is rapidly increasing.
In fact, it is the port in Gdansk where the heart of country's energy security beats. It is the only place where crude oil is imported to our refineries and it is de facto an alternative to the oil pipeline from the east, which is fed to our refineries.
We see a very clear trend showing that supply from the sea based on other types of oil than those coming from Russia is increasing. This is also the reason why our refineries are becoming one of the most modern in Europe and are trying to process oil with less sulphur.

How does the growth in transshipments translate directly into economic development of the country?
Thanks to the transshipments, which are higher every year, our port is strengthening its position on the map of the largest ports not only in the Baltic, but also in the European Union. Currently we are in the top twenty largest ports in Europe, and we want to be in the top ten.
However, when it comes to total transshipments on the Baltic Sea, we are in first place. These numbers, the weight of goods and their value translate into revenues for the state budget, as well as new opportunities for manufacturers and importers.

A lot has changed in terms of port infrastructure. There were investments within the co-financing from the CEF programme, i.e. the reconstruction and modernization of 5 km of quays in the Inner Port and deepening of the waterway to the depth of 12 meters. The next installment, the so-called CEF 2, will again bring money to improve and modernize the wharves, and this is probably one of the priorities for this year?
I want to emphasize that these investments help our operators to enter even higher volumes, because they become more competitive so as to handle more cargo groups. Modern quays translate into much greater efficiency of work. Operators no longer have virtually no logistical barriers - they are limited only by their ingenuity in organizing reloading.
This year, as part of the CEF 2, we want to redevelop further areas, including the Vistula Quay, 800 meters of the Coal Quay, the Mining Basin area and the Bytom Quay.
We are also looking for synergies between still undeveloped areas, not belonging directly to the port, but managed by other entities, i.e. municipal companies or other state-owned companies or the economic zone, which gives a natural incentive to invest in a given part of the country.

Climate change is forcing global action in virtually all sectors of the economy. What "green" activities does the Port of Gdansk carry out and what does it do to contribute to reducing CO2 emissions?
We are working on adapting the berths to enable the so-called Onshore Power Supply (OPS). This is not only the investment in the wharf itself, the laying of infrastructure, but also the reconstruction of the Main Port Electricity Supply Point. We are talking here about gigantic power consumption.
We are going to invest tens of millions in the implementation of very large investments, especially in terms of power supply to the container terminal. These ships, which carry freezers on their decks, have very high electricity consumption. This means reconstruction of the entire cable infrastructure so that it is possible to connect vessels from land.

It seems that this process of transition to green operations will not pass anyone by.
The Port of Gdansk is already ahead of regulations that will force shipowners to buy electricity from shore. It will be increasingly green, after all, it will be generated offshore.


In all these investments we are talking about, not only the practical aspect seems to be important. The saying goes that the way they see us, the way they write us. The port areas have certainly gained visually and aesthetically.
We try to be a model for ourselves. We want to set the standards for European ports. For us, as the manager of these areas, the most important thing is to be a visible host.

And what does this kind of management mean exactly?
Everyone here has one simple task: to take care of their own. We want the owner's hand to be visible in the port. To this end, we have, among other things, eliminated illegal dumping grounds, we have successfully completed a very large program of building a new fence system, which we combined with the construction of new electronic security systems.
These investments are many. Recently, we have been building a smaller road and rail system directly at the back of the Industrial Quay.

The port is a huge organism, it operates around the clock. Besides economic management, what are the characteristics of the management style you represent?
I always believe that the most important thing is to understand the processes that take place in the port. This is very much a field work, close to the operators, their transshipments. Only in this way can we understand the needs and grow stronger.
With the extensive knowledge that we have, and remember that the port combines many industries and specialties, we can make the right decisions. We are here to create synergies, associate entities and bigger businesses. Hence the good cooperation with the economic zone, with the administrators of areas around ports. We want to use our common potential.
Sometimes, to see the whole mosaic you need to look at the port from a different perspective. To see what should be improved, what should be streamlined, so that the port is part of the processes occurring around the world.

The port never falls asleep, but does its CEO fall asleep without thinking about the port? What does your day look like?
A phone on 24 hours a day is not only a necessity, but above all a sense of responsibility for employees and the entire infrastructure. As everywhere, we need a break from work, because it gives us some distance, allows us to think about the processes, but despite this I am in constant contact with both members of the board and the port services, which ensure full operation 24 hours a day, 7 days a week, 365 days a year.