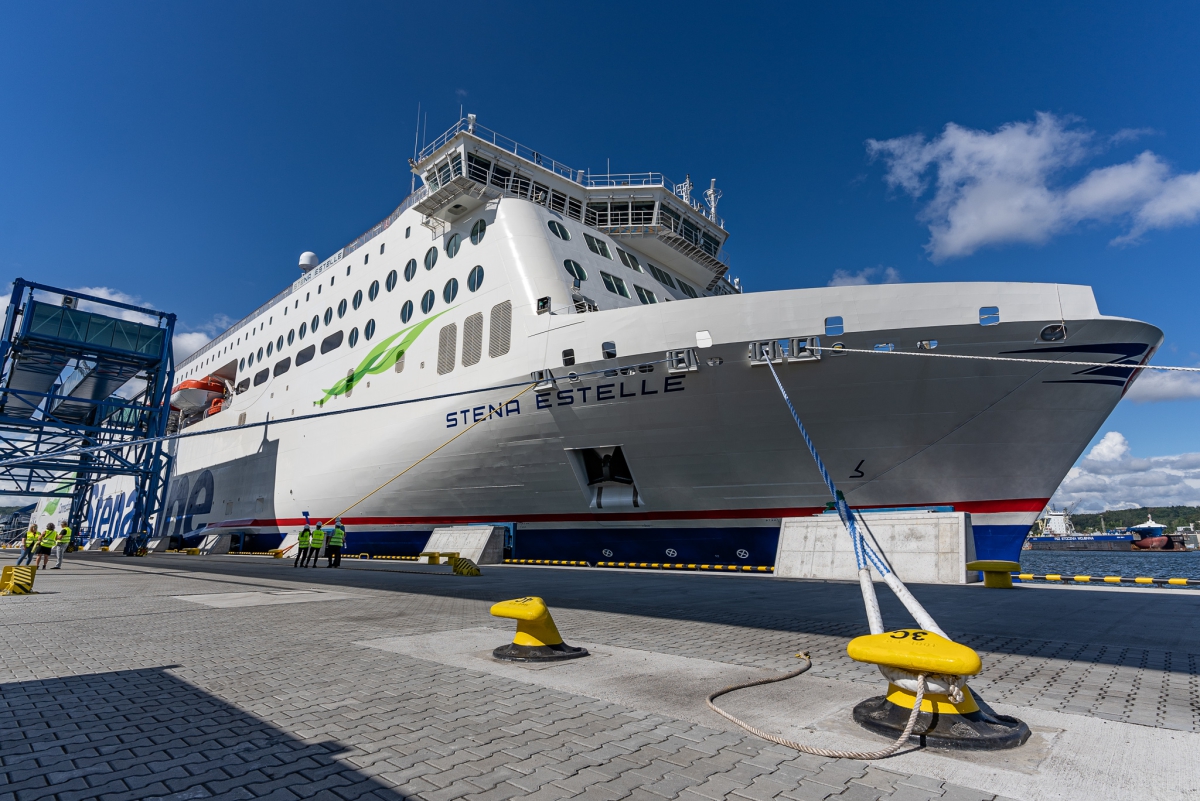 Stena Estelle, the new Stena Line ferry, arrived in Gdynia for the first time yesterday as part of a trial mooring at the Public Ferry Terminal, from which it will run to Karlskrona starting from Sunday.

Stena Estelle came to Gdańsk from a shipyard in China in mid-August. The ferry was undergoing final preparations to enter the Gdynia - Karlskrona line at the Remontowa shipyard. Yesterday, on Monday, August 29, the vessel moored for the first time at the Public Ferry Terminal in Gdynia, from where it will depart from Sunday as part of the regular service. 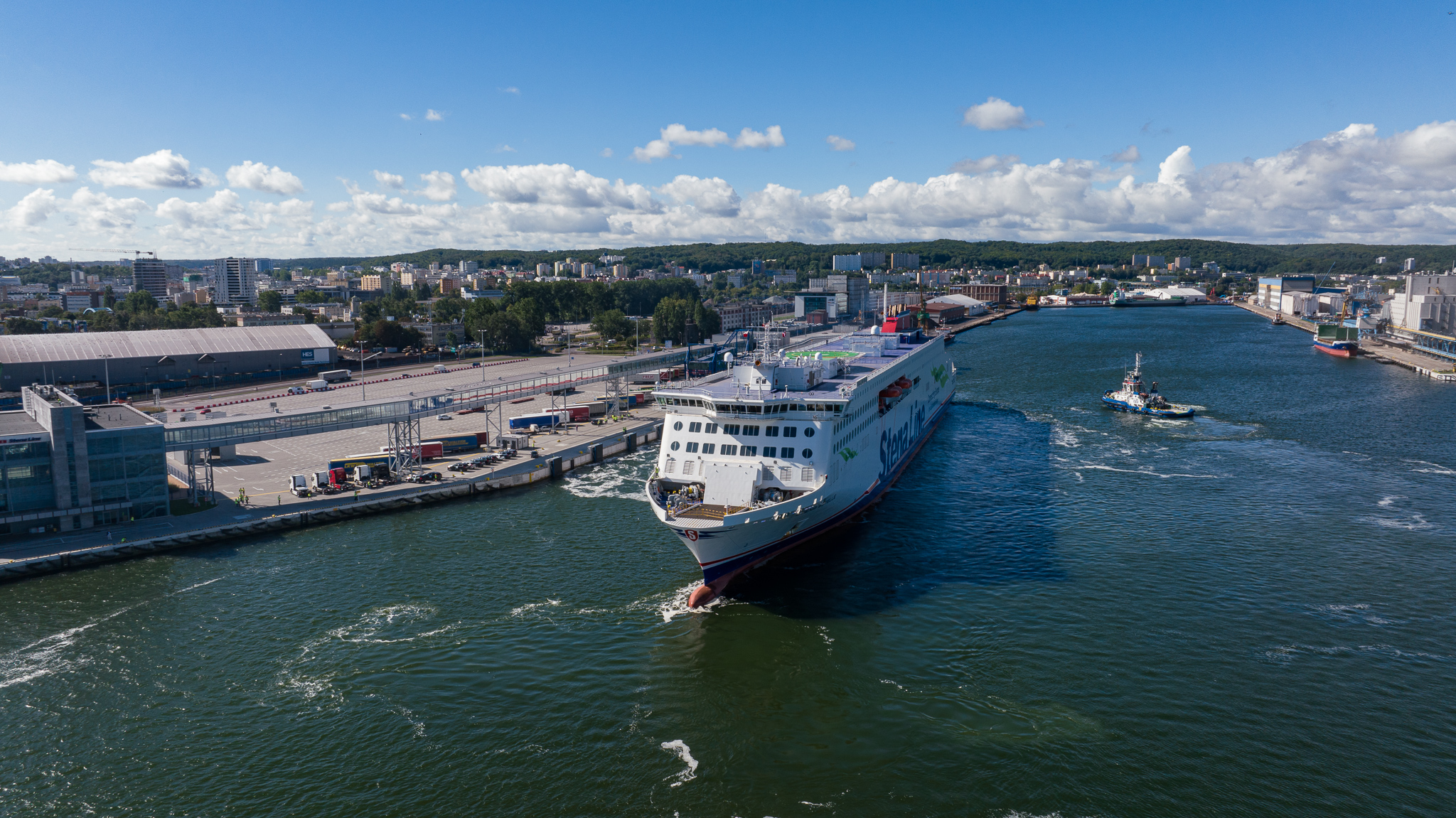 The new ferry passed through the gate of the Port of Gdynia around 10:15 a.m., a few minutes later it turned at the level of the Public Ferry Terminal, and then arrived at the quay. The operation of the first trial mooring was watched by a group of employees of the Port and Stena Line. After mooring, the hatches of both holds - the upper and the lower one - were opened and the first vehicles drove onto the ferry along the ramp. There was also a passenger sleeve.

After all systems and mooring possibilities at the Public Ferry Terminal have been technically verified, Stena Estelle is almost ready to start its regular service. The first official cruise will start on Sunday, September 4. Before that happens, one more event awaits the vessel - official naming, which was scheduled for Saturday, September 3.

Stena Estelle is a new, 240-meter E-Flexer class ferry. Together with the twin ship Stena Ebba, which will be handed over to the carrier later this year, it is the largest E-Flexer ever built. The ferry offers 263 cabins, space for 1,200 passengers and a cargo capacity of 3,600 meters. Like all E-Flexer ships, the Stena Ebba and Stena Estelle have optimized hull, propeller and rudder designs for enhanced performance. These are also vessels that may be adapted to run on alternative fuels in the future. The new ships will ensure an increase in the capacity of the Gdynia-Karlskrona route in response to the growing customer demand for transport in the southern and eastern Baltic Sea region.

„We are very pleased that we can present the new Stena Estelle ferry, which will expand our offer for both freight customers and passengers. This brand new vessel is the most modern in our fleet and is unmatched in terms of capacity, performance and service. Thanks to such new ferries as Stena Estelle and its twin Stena Ebba, which will arrive in Poland in November this year, we are opening new opportunities not only for the development of our company and the Gdynia-Karlskrona line, but also for the development of our clients' businesses in this part of Europe,” said Marek Kiersnowski, Managing Director of Stena Line Polska. 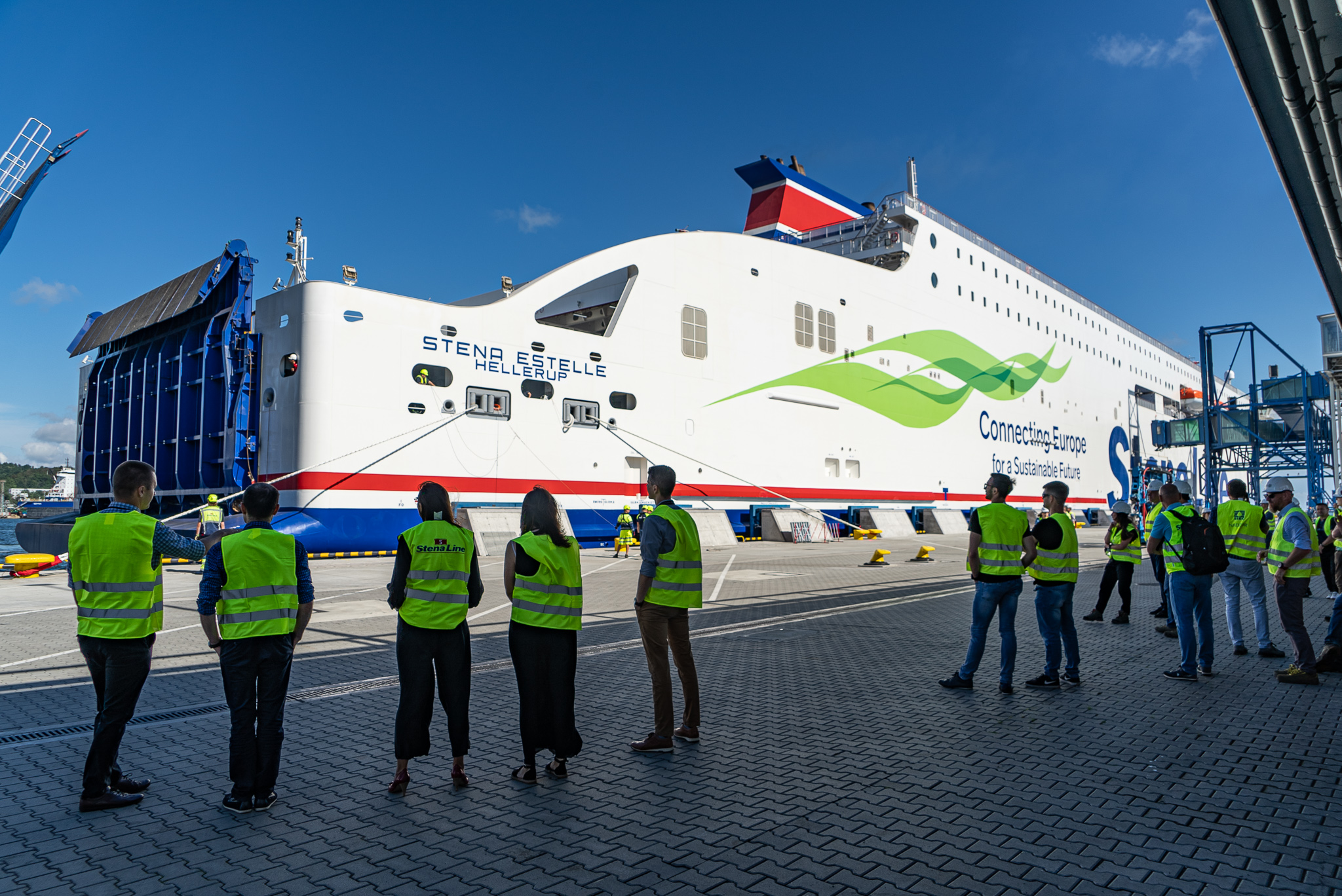 From June this year, Stena Line ferries depart from the new Public Ferry Terminal in Gdynia. The facility, which is one of the most important investments of the Port of Gdynia Authority in recent years, is located at the entrance to the port, at the Polish quay, in the immediate vicinity of the Emigration Museum. The main terminal building, parking lot and all the necessary infrastructure for servicing ferries are located on 6 ha.

According to the port itself, the location of the terminal is conducive to the development of the freight sector, and also gives the possibility of implementing intermodal solutions in the ferry-rail relationship in the future due to the proximity of the railway line. The new terminal also enables the introduction of modern improvements in port operations, such as Smart Gate, which automate the collection and delivery of trailers. The terminal will also allow the ships to be powered from land while they are parked, which will significantly reduce exhaust emissions. From the perspective of ferry passengers, it is important that the new terminal is close to the city center, it also offers more space and a lounge with a sea view.

Most recent
Stena's new ferry will set sail from Poland in September
2022-08-17
New Public Terminal in Gdynia already in operation [VIDEO]
2022-06-20
A contract has been signed for a new ferry for the Polferries
2022-08-11
[VIDEO] Another eco-friendly electric ferry launched at Crist shipyard. Charging takes a few minutes
2022-07-14
SHOW MORE
Meet innovative companies from Poland
SHOW