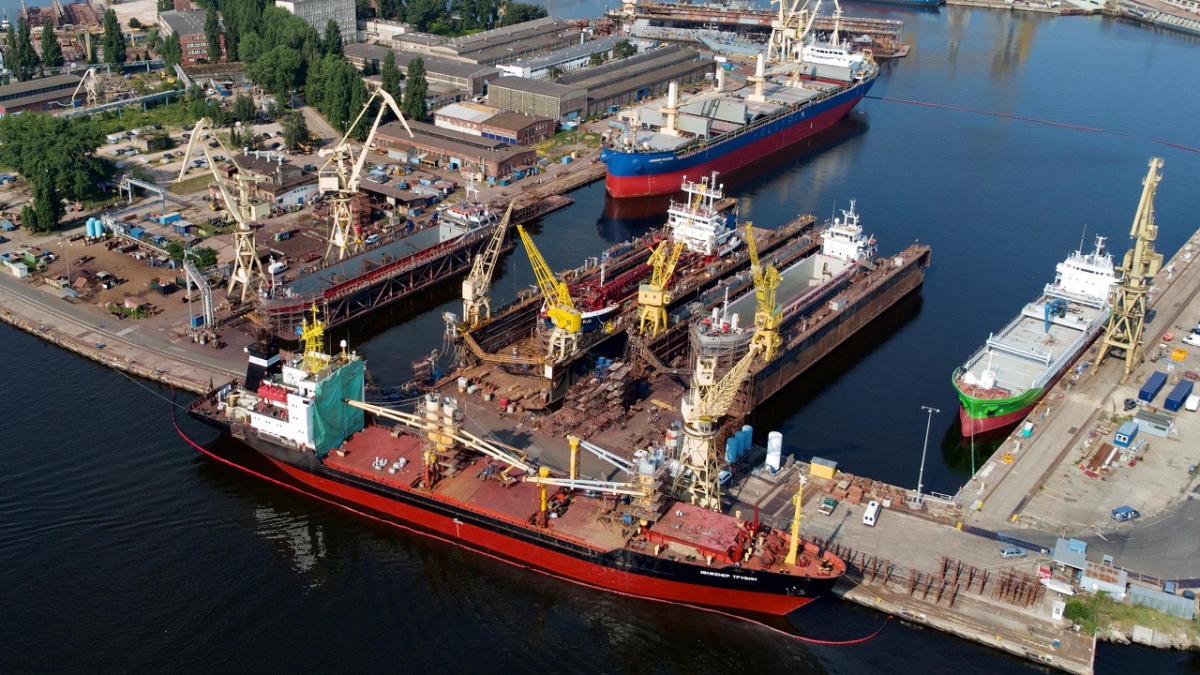 Shipyards
The 70th anniversary of Gryfia. "The heart of the shipyard is the crew. Thanks to them we have survived and we are recording constant growth"

"Gryfia" Shiprepair Yard celebrates its 70th birthday. On this occasion, we talk to the company's management about its condition, details of the recovery program and a breakthrough investment - dock number 8.

In recent years, the Gryfia Shiprepair Yard has been going through an intense time of reorganization on many levels. The management of the shipyard focuses on rebuilding the company's structure.

- For five years we have been consistently implementing the recovery program, we are reorganizing the structure of the shipyard, which until 2015 was dispersed and in a complete collapse. Things were going wrong here, as evidenced by the dismissal of over a thousand people - reminds Krzysztof Zaremba, president of the Gryfia shipyard.

Currently, efforts are directed to the renovation of shipbuilding infrastructure, organizing property matters and concentrating production in Szczecin.

- It consists of many activities. We took the equipment from Świnoujście and got rid of many unnecessary properties. All this to allocate the generated income for investments - lists the president.

- The largest among them is the new dock depth for the new dock No. 8, which is being built for us by the Szczecin Shipyard "Wulkan". Currently, it is at the stage of designing and making the first elements. Next year it should be standing on the water.

Dock no. 8 is the largest project in the company's history, it will be located at the Gdynia Quay, in front of the Szczecin Shipyard "Wulkan". The quay itself is to be extended with a 60-meter pier.

Dock no. 8. "We will make the most of the possibilities"

Why is this investment groundbreaking? Amarendra Roy, board member for commercial affairs at Gryfia, explains that the construction of the dock is driven by trends that you just have to follow in order not to be left behind and stay competitive.

- Everybody is building bigger and bigger ships today, which translates into savings - explains Amarendra Roy. - The Port of Szczecin-Świnoujście has invested a lot of money in the deepening of the fairway. Why should we not take advantage of these opportunities? - he asks, adding that if vessels can enter Szczecin, it is also worth docking them in the shipyard.

Among other arguments for the construction of a groundbreaking dock for Gryfia, he mentions a large customer fleet from the region.

- Until now, we were limited by the ability to dock more units. After the investment is completed, this will change and, of course, we will be able to accept larger ships - he says and adds that a lot will change in the functioning of the shipyard also in the context of repair planning. - A large dock means greater freedom, optimal use of our capabilities. More repairs mean more profit for the shipyard acquiring new orders.

Recovery program, or how Gryfia changes

Gryfia's reorganization continues in many respects. Managing Director of the shipyard, Artur Trzeciakowski, admits that the recovery program is a necessity and a challenge for the current team managing the shipyard.

- For many years, remedial programs were carried out on the basis of savings consisting in the lack of investments, minimizing repairs and the shipyard's assets, reducing the number of employees - the director included. - This style of management did not bring any results, there was no question of regaining the company's profitability.

The draft recovery plan was created in 2020 and is planned for the next five years.

- We focused on adjusting the production potential to market requirements - explains director Trzeciakowski. - We have calculated that it will be possible thanks to the construction of a new, large dock.

He points out that obtaining funding was quite a challenge.

- We decided on mixed financing, where the shipyard had to put up some of its own money, the rest was guaranteed by a leasing contract. The new dock is being built by our owner (FRS), and after the construction is completed, under a contract, it will be used by Gryfia, which will pay off the investment during operation - he explains.

Director Trzeciakowski emphasizes that the dock is a key investment, but others depend on it. This is why new quays, dock depth and piers are being built. - We had to pay for these tasks with our own money. It was possible thanks to the sale of the closed plant in Świnoujście.

According to the director, the success of the recovery program is the consistent implementation of the adopted assumptions.

- It is not an easy task - he reserves. - We were faced with an attempt to catch up with huge investment backlogs. An example is the commissioning of a social building for employees, planned for September, which has been under construction for 22 years.

However, the numbers are good. - Repairing Gryfia, bringing the company to a regular income, is a matter of many years. Currently it can be said, that the yard is making profits. The results are proof of this: we closed the year 2021 with a profit exceeding PLN 20 million, while the first half of this year - with a result of PLN 20 million. We assume that the following years will bring positive results - he forecasts.

Business is when people are the value

- The bonus system is already a success, praised by employees for the transparency of the rules. We are convinced that it also has a motivating effect on the team, and this in turn increases the quality of work - explains President Zaremba.

Gryfia specializes in refurbishment and conversion of vessels.

- Thanks to the activities of the Gryfia shipyard, the development of shipbuilding companies in our region was possible. The famous hull of a space rocket transport vessel was built in Szczecin. Its launch, after being transported from the mainland to the floating platform, took place in our dock No. 5 - recalls President Zaremba.

The fact that the shipyard is doing well is also evidenced by the full portfolio of orders.

- We have a stable work planned for several months ahead. The interest in our brand results from a good price-quality ratio - he convinces. - Among the more important orders is a contract with a very demanding Japanese shipowner - Kawasaki Heavy Industries.

The head of Gryfia argues that after the turbulent period of the shipyard's activity, it was possible to go straight, and the crew has great merit in this.

- It was the workers who defended this place. I had the honor of being a representative of the crew on the supervisory board in the years 2014-2015, which are critical for the shipyard - he recalls and adds that good relations with the Solidarność '80 union are extremely important. - The crew is a partner for us, this is their company, so everyone cares about this place as if it was their own - he adds.

The president of Gryfia reminds that the official 70th anniversary was celebrated at the Philharmonic in Szczecin. One of the elements of this honorable birthday was a less formal but very successful festival for employees.

- This is what we want to maintain a family atmosphere, an atmosphere of partnership. We receive voices that this type of integration meetings are needed. Suffice it to say that the older employees did not remember the last time such an event took place. For us as management, these are team-cementing meetings, which also make it possible to get to know new employees, who are constantly growing - says the president of Zaremba.

What is the CEO's wish on the occasion of the great jubilee?

- My dream is to keep the company on solid foundations, build its potential, not destroy it - he says. - I feel doubly connected with this place. We are talking about sentimental and family matters, but they are so important. One of my grandparents was a welder in Gryfia for 40 years. It is thanks to him that, as a 3-year-old boy, I visited the shipyard, and at home there were always souvenirs related to this important place for me.

The President emphasizes that Gryfia is a permanent element of Szczecin's reality - both mental and industrial. The breakthrough in the history of the shipyard was in 1990, when dock no. 5 was built - the largest one since the beginning of its operation.

- The Shipyard has been the breadwinner of many families for decades. No wonder it cements, awakens a sense of community and attachment to the shipbuilding character of our region. I think it is something good and it is worth doing everything not to lose it - he sums up.