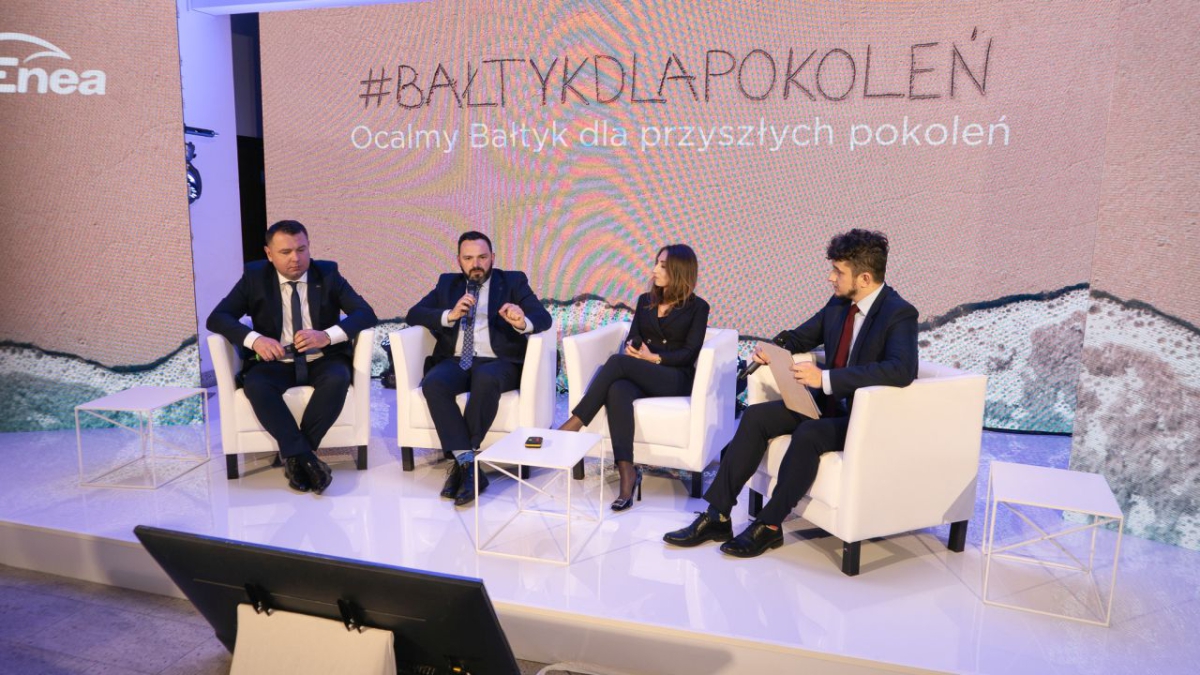 About 40,000 tons of chemical weapons and even 500,000 tons of conventional weapons were sunk in the waters of the Baltic Sea – recalled experts invited by Enea and the United Nations Global Compact during the Friday (3 December) conference inaugurating the "Baltic for generations" project. The aim of the social campaign is to make Europeans aware that an ecological bomb is ticking on the bottom of the Polish sea, which can cause tragic consequences for the marine ecosystem and a large part of the continent. The organizers want to include Polish business in international dialogue, which may contribute to a faster solution to this burning problem.

The campaign of the project "Bałtyk dla pokoleń" started with a debate at the National Maritime Museum in Gdańsk.

He also assured that United Nations Global Compact Network Poland wants to continue the talks undertaken at the climate summit in Glasgow COP26. - We had a chance to talk about the Baltic basin, as well as the ecosystem, economic and energy problem. The purpose of these debates is to raise the money needed to extract munitions, unexploded bombs and chemical weapons from the seabed - he added.

So where should you look for chemical weapons?

- We don't know its exact location. Today it can be said that the location of only a few percent of the total is known - admits prof. Jacek Bełdowski from the Institute of Oceanology of the Polish Academy of Sciences, moderator of the panel "Threat at the bottom of the Baltic Sea - an environmental alarm".

- We know where the main dumping areas are, but it must be remembered that the weapons were sunk outside of them, and partially drifted after the sinking. There were cases, when the weapons was stranded ashore in the 1950s. It's a hard-to-locate threat.

Chemical weapons on the bottom of the Baltic and... oceans. "There is no integration in the community"

The Polish Academy of Sciences professor emphasizes that the chemical weapons on the bottom of the Baltic Sea are constantly unsealing, polluting the sea.

- So far the pace is slow, but it is difficult to predict if it will stay this way. There is a chance that everything will happen gradually, at this point we will be dealing with local contamination, which is one of the many negative factors affecting the Baltic Sea - explains Jacek Bełdowski. - So far, there is no such time series that would be a monitoring, tracking what is happening with the object for many years. Without such data, we cannot say whether a catastrophe will occur or not.

Do scientists have an idea how to solve a problem that is left over from WWII activities?

- We suggest greater involvement in the international arena. It is currently not costly but labor-intensive. Let us remember that this is not only the Baltic problem. Research is conducted in many regions of the world, but there is no integration. We scientists know each other from scientific publications and from a few conferences.

Cleaning the seabed and offshore

The idea to intensify efforts to resolve the issue of chemical weapons is to join forces from business, politicians and scientists. The "Baltic Sea for generations" campaign is to help make these ideas real.

- Today, when planning investments with PGE regarding offshore in the Polish Baltic Sea, we see a problem. We want to support ideas for its solution, so that investments related to the broadly understood energy transformation and renewable energy sources will not be postponed in time - explains Paweł Szczeszek, President of the Management Board of Enea S.A.

The president of the management board of the GeoFusion Group said that the seabed cleaning systems already exist.

- We have created our system for the cleaning seabed for wind farms, but at the moment it is not a solution for the entire Baltic Sea - says Łukasz Porzuczek, CEO of the GeoFusion Group. - This is the first system in the world that was created thanks to the help of Polish universities and the involvement of Polish scientists, and was dedicated to the needs of this type of investment. If you come across chemical weapons, the farm construction process will not be interrupted.

Anna Fotyga, Member of the European Parliament, co-author of the resolution calling on the European Union to take action to cleanse the Baltic Sea of chemical weapons from World War II, emphasizes that attempts to solve the problem were made many times, but there was no full agreement and clout.

- In the middle of the last term of the European Parliament, it was possible to create a group beyond political and national divisions. This made it possible to use the petition that appeared in the European Parliament and to shape the documents appropriately. It is time to act. The conclusion of all the discussions among the decision-making groups is the postulate showing the way and the institution. It's time to move from the research stage to the executive stage - explains Anna Fotyga.

- Technological progress is favorable for cleaning the seabed. Activities are getting cheaper now, there are fewer threats thanks to robotization. And most importantly: we have the opportunity to use technologies that we could only dream of before.

The conference inaugurating the project "Baltic Sea for generations" was held under the patronage of the Ministry of State Assets.

Most recent
In Brussels about weapons sunk in the Baltic Sea. Removal technology is ready, now let's all work together
2021-11-22
Offshore Wind Farms: Misfires and Chemical Weapons in the Polish Marine Areas
2021-11-17
The energy transformation must be an economic transformation – 34th EuroPower Energy Conference & 4th OZE Power [VIDEO]
2021-11-23
The ECR Group in the European Parliament invites to an online conference about unexploded munitions and chemical residues in the sea [AGENDA]
2021-11-12
SHOW MORE
Meet innovative companies from Poland
SHOW