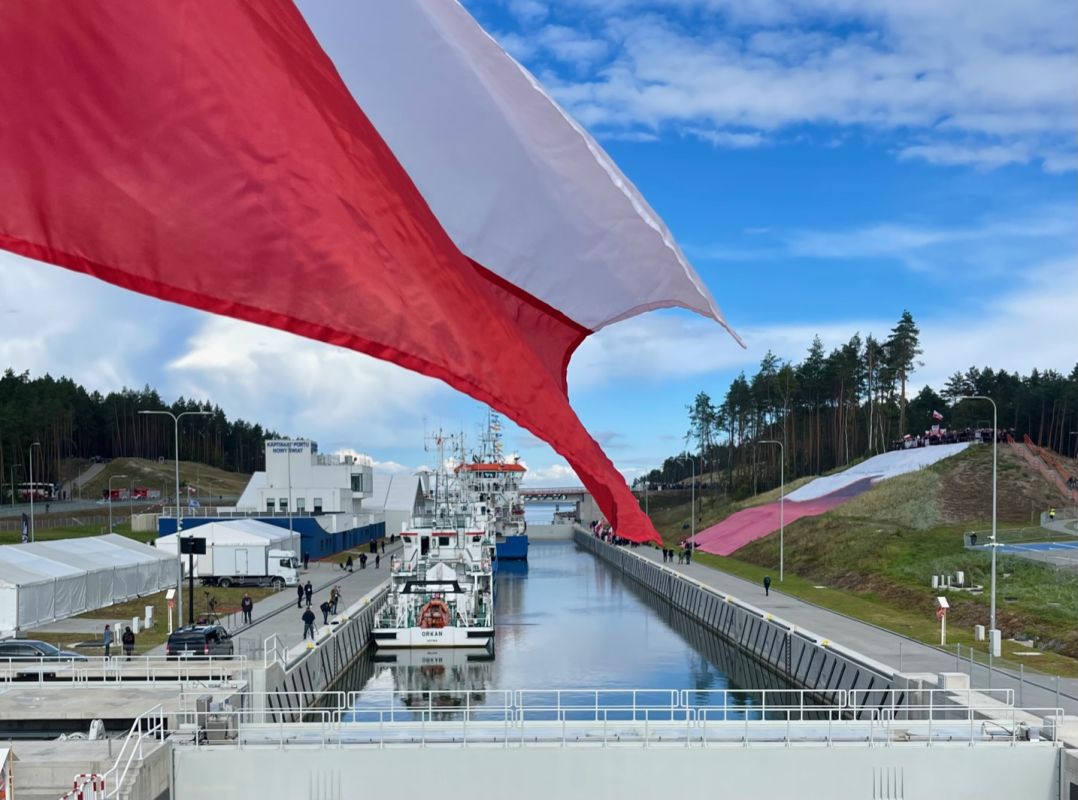 Seaports, Shipping, Logistics
[VIDEO] The canal through the Vistula Spit is open

The highest Polish authorities participated in the opening ceremony of the shipping canal through the Vistula Spit, which took place on September 17. From September 18, the canal is open to the public.

The leading politicians representing the government appeared at the opening of the investment.

"As the president of the Republic of Poland, who has an extraordinary mandate on behalf of my countrymen and their decisions, I want to announce that despite the difficult geopolitical position of Poland, despite the winds of wars, losses in the nation millions of millions, despite all the adversities, difficult times, despite the years of communism and all that, what has happened in the last 30 years, Poland is winning, is winning today here, on the Vistula Spit," said Polish President Andrzej Duda.

The president said that opening the shipping channel through the Spit is "a great victory for Poland, patriots and those who understand the importance of sovereignty." "A state that understands its potential and importance cannot afford to be dependent on someone else deciding on its important and strategic matters."

"The point is not that the largest ships can pass here. That is why we have other ports. The idea was to symbolically make this road open, so that we would not have to ask for the consent of a country that is not friendly to us."

During the ceremony, there were also speeches, incl. Jarosław Kaczyński, the President of Law and Justice, Mateusz Morawiecki, Prime Minister of Poland, and Andrzej Adamczyk, Minister of Infrastructure.

The lock was symbolically opened by Deputy Minister of Infrastructure Marek Gróbarczyk and the Director of the Maritime Office in Gdynia, Dr. Eng. Capt. Wiesław Piotrzkowski. Piotrzkowski reported readiness, and then Gróbarczyk announced that "the waterway connecting the Vistula Lagoon with the Baltic Sea has been opened today". Then Piotrzkowski called Capt. Paweł Perkoz, the captain of the Nowy Świat Port: "Please start locking in". "Locking procedure started," Perkoz replied.

The first vessel that officially sailed through the lock was the ship of the Maritime Office in Gdynia, Zodiak II. Behind him was SG-312 Kaper-2, a border guard ship

The shipping canal connects the Vistula Lagoon with the Bay of Gdańsk. Thanks to it, vessels can flow directly between two reservoirs without the need to sail through Russian waters, i.e. the Piława Strait.

The opening of the canal completes the first stage of the shipping canal, which will ultimately lead through the Vistula Spit and the Vistula Lagoon to Elbląg. After the deepening of the fairway into Elbląg via the Vistula Lagoon, sea ships with a length of 100 meters and sets of barges 180 m long, 20 meters wide and 4.5 m deep will be able to enter. However, there is ongoing political dispute on who should cover the financing of the deepening of last 900 meters of the fairway to the Port of Elbląg.

The total length of the new waterway from the Bay of Gdańsk through the Vistula Lagoon to Elbląg is nearly 25 kilometers. The passage itself through the Vistula Lagoon is just over 10 kilometers, on the Elbląg River - also over 10 kilometers, and the remaining 2.5 km is a section consisting of a lock, an external port and a parking stand. The channel and the entire fairway will ultimately be 5 meters deep.

Most recent
Will the Vistula Spit canal be completed by the summer vacations?
2022-03-28
The Port of Elblag closes its doors to coal from Russia. President: We stand in solidarity with the Ukrainian people
2022-03-08
The Elbląg Sea Port is starting to monitor air quality
2022-01-19
Baltic Hub 3 at DCT Gdansk. Contract with Budimex for terminal expansion signed
2022-07-08
SHOW MORE
Meet innovative companies from Poland
SHOW