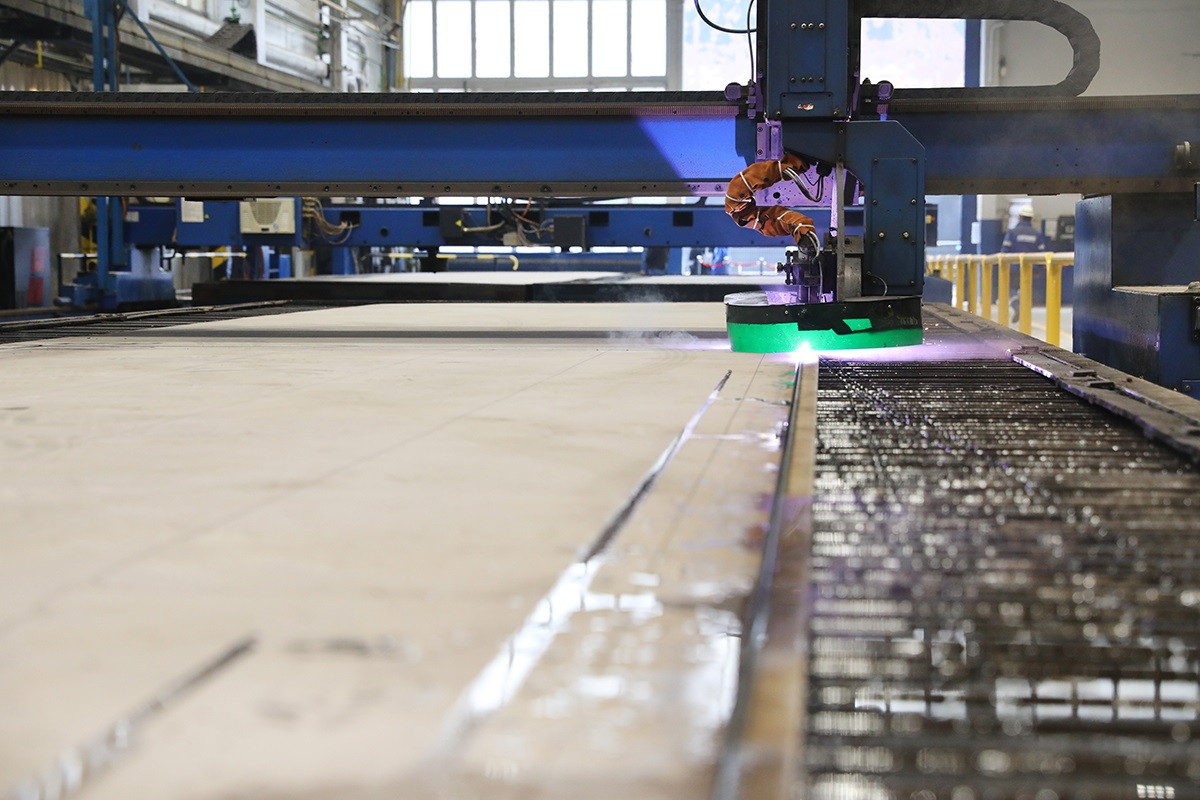 On Monday, October 24, at the Gdańsk Remontowa Shipyard production of the first Ro-Pax ferry, construction number 101, for Polskie Promy, which will be operated by Unity Line, owned by Polska Żegluga Morska, has started.

As Krzysztof Gogol, advisor to the managing director of Polska Żegluga Morska (PŻM) informed, the event was attended by, among others Grzegorz Witkowski, Undersecretary of State in the Ministry of Infrastructure, Andrzej Wróblewski, CEO of PŻM, Adam Ruszkowski, President of the Management Board of Remontowa Holding SA, Michał Habina, President of the Management Board of Remontowa S.A., as well as representatives of banks and insurance companies, classification societies, institutions and companies involved in project and shipyard workers.

Cutting the first sheets means the start of the technological process of ferry production in the shipyard. They were made in plasma technology using a CNC cutter with a 3D head, enabling cutting steel and metal alloys (aluminum, stainless steel) with simultaneous edge bevelling.

This device produces a beam of high-energy plasma with a temperature of up to about 30,000. st. Celsius. It is one of several techniques for processing steel elements used in shipyards of the Remontowa Holding group, enabling fully automated, precise, efficient and fast cutting.

- Today, we are starting an important phase of the production process of the first of the ferries for Polish shipowners. It is a strategic undertaking aimed at defending and maintaining the market position of domestic ferry companies in the changing conditions of shipping in the Baltic Sea. The new vessels, completely and from scratch, have been designed for the service in the Baltic Sea area. They have a chance to meet the challenges posed and bring an effect in the form of strengthening the position of Polish shipping companies. The investment has a strong ownership and operator base, including the State Treasury, PŻM P.P. Capital Group, PŻB S.A. Capital Group. The construction of new ferries with the participation of the State Treasury will allow, among others, on the increase in the value of the shares of Polish carriers on the Baltic market, employment of 800-1200 people directly at the construction site, and at a later stage also ensuring constant revenues for domestic repair shipyards for the next 30-40 years - said Maciej Furmański, president of Polskie Promy.

- Today we are witnessing the commencement of the physical construction of the first of the ferries ordered from the Gdańsk Shipyard Remontowa by Polskie Promy. In the near future, this vessel will operate under the name of Unity Line, belonging to the Polska Żegluga Morska Group, and will open a completely new chapter in Baltic shipping in terms of modern technical standards and environmental friendliness. As a company with over seventy years of experience in operating on the international shipping market, we are able to appreciate a reliable business partner, which is what the Remontowa Group is for us, a brand known all over the world for its reliability and high standards of service. We are also glad that the Polish shipowner will have ships built in the Polish shipyard in his fleet. So we ask shipyard workers to put the nameplate with the name of the manufacturer in a visible place, because we will be very proud of it - said Andrzej Wróblewski, the managing director of Polska Żegluga Morska.

- Less than a year after signing the contract, after months of intensive preparations in the field of design, financing, equipment and logistics of deliveries as well as the organization of the production process, we started the construction of the first ferry. This is a great moment for us - shipyard workers. Our competences and vast experience, the knowledge of our engineers and constructors, accumulated over the years in our group's shipyards, will now be used to strengthen the competitiveness of Polish shipowners, which will also translate into employment for cooperative companies with whom we cooperate in the implementation of this project. We are proud to be entrusted with the production of these units. We also feel a great responsibility, because their construction will be monitored by the entire ferry and shipbuilding industry. The success of this project may mean a new opening on the European shipbuilding market and strengthen the role of the Polish industry as a supplier of low-emission, modern vessels - says Adam Ruszkowski, President of the Management Board of Remontowa Holding SA.

- We will build ferries according to the technology that is well-tested in our company. After the appropriate steel elements are cut out, they will be transported to the prefabrication halls of flat sections, as well as semi-finished products. At the prefabrication sites, they will then be assembled into spatial sections, which will then be transported to the construction site of the block. We will build blocks on a semi-submersible barge, capable of lifting objects weighing up to 25,000 tons. After launching and putting the blocks into the floating dock, they will be merged into the hull of the vessel - explains Michał Habina, president of the Gdańsk Shipyard "Remontowa" S.A.

The ferries are built under a contract signed on November 26, 2021. Remontowa S.A. will build three units for Polskie Promy. Two of the vessels will operate under the colors of Unity Line, a subsidiary of PŻM, and one will be used by PŻB. Part of the contract is a letter of intent containing the option to build a fourth ferry.

They will be one of the most modern vessels of this type in the Baltic Sea, powered by four liquefied natural gas (LNG) engines with battery support in a hybrid system. Instead of conventional propellers, each ferry will be equipped with two azimuth thrusters at the stern and two bow thrusters at the bow, which will greatly facilitate maneuvering in ports.

The conceptual design, design and executive documentation was prepared by the Remontowa Marine Design and Consulting office from the Remontowa Holding group in cooperation with the Ordering Party. Before commencing the production phase, there were, inter alia, theoretical calculations and model tests of the ship in the swimming pool of Centrum Techniki Okrętowej SA, confirming the basic parameters, such as stability, hull shape, draft, load capacity, load line length and speed.

The shipyard secured steel supplies and signed contracts for equipment, including energy systems, motors and thrusters, automation and control systems, heating and ventilation as well as ro-ro equipment (enabling loading and unloading).

The shipyard also obtained performance bonds and payment guarantees, and concluded a line agreement with a consortium of banks for guarantees and letters of credit, securing deliveries related to the implementation of the project.

The hull will be manufactured and assembled in Gdańsk Remontowa Shipyard from sections built partly with the participation of subcontractors, using the block consolidation technology developed in the shipyard, using the dock infrastructure. Each ferry will consist of six hull blocks and seven superstructure blocks, which will be constructed from 265 separate sections. One hull will weigh 11,000 tons.

Most recent
Toward more sustainable shipping. Stena Line's newest ferry christened in Gdynia [VIDEO]
2022-09-05
[VIDEO] Test mooring of the new Stena ferry in Port of Gdynia
2022-08-30
A contract has been signed for a new ferry for the Polferries
2022-08-11
Stena's new ferry will set sail from Poland in September
2022-08-17
SHOW MORE
Meet innovative companies from Poland
SHOW