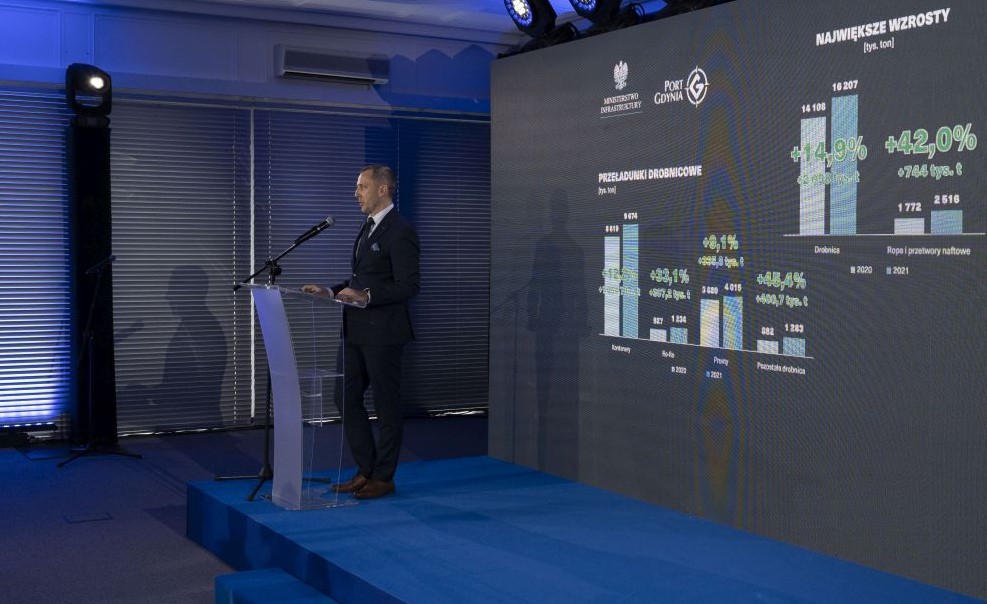 In 2021, a total of 26.7 million tons of cargo were handled at the Port of Gdynia, an increase of 8.2% compared to 2020. In the same period, the number of calls of commercial ships to the port increased by nearly 15% to 4240. The Port of Gdynia is the largest agroport in the Baltic Sea, it also ranks third in terms of container handling - nearly 1 million TEU in 2021.

- This is another very good year for the port. The total transshipments were at the dynamic level of 8.2%, and containers - 8.9%. These are the results generated by all terminals operating within the administrative boundaries of the port and our employees - said Jacek Sadaj, President of the Port of Gdynia Authority.


Ro-ro transshipments recorded a particularly good result, increasing by 33.1% - Ro-ro is indeed an extremely important group of cargo for us - admitted President Sadaj. - In our long-term strategy, we really want to develop this area. This is why we are preparing to expand Basin V to make the infrastructure in this area even more friendly.

He noted that the Port of Gdynia has a very sustainable development.


- The loads are therefore distributed proportionally, also diversifying the risks. Through ro-ro, Port Gdynia reloads a lot of cargo, the increases were satisfactory - said Jacek Sadaj, emphasizing the result of reloaded diesel fuels, which resulted in 45 percent. - This is another direction in which we want to develop - he added.

Investments and celebration of the 100th anniversary of the port


In 2021 the access infrastructure in the western part of the port was modernized.

- Electrification fits in with the idea of „green port". This includes the development of the railway access infrastructure in other port areas, carried out by the PLK company. It is also a direction of changes that are very important for Gdynia. The port is surrounded by urban tissue, and in order to continue to develop, it must also focus on access roads -explained President Sadaj.


In 2021, the Port of Gdynia obtained another PLN 4 million for the project and concept for the development of Gołębia Street, which will be an alternative access route, e.g. to Basin V.

Work was also carried out at the PERN Fuel Depot in Dębogórze, where two new tanks were installed (both contain 32,000 m3 of diesel oil). There is also a new filler in the base, which allows the service of tankers with a load of over 30,000 tons.

An important event for the Gdynia port was the completion of the construction of the ferry terminal.


- At the moment, the last works related to the modernization and adaptation of the premises to the needs of two operators who have declared and will continue to cooperate with us in the new location are in progress. We are talking about Stena Line and Polferries, which will start operating in the new terminal this six months, announced the president.

The port authorities are counting on further good results in the near future. The deepening of internal basins will certainly contribute to this, thanks to which the largest container vessels will be able to enter the port. One cannot forget about the ongoing expansion of the maneuvering and storage yards. Thanks to them, it will be possible to handle both containers and offshore structures.

In 2022, the new tank will also be constructed at the PERN Fuel Depot in Dębogórze, and two more are already planned, the extension of the railway loading front and the railway siding will also take place.

Let us add that 2022 will be particularly special for the Port of Gdynia - September 23 marks its 100th anniversary. - We are already preparing a number of surprises for the entire port community, because we have something to celebrate - Sadaj summed up.

Most recent
The first intermodal train from Xi'an reached Gdynia
2021-12-24
Busy turn of the year at the Nauta Shipyard in Gdynia [VIDEO]
2022-01-09
The ports in Gdańsk, Gdynia and Szczecin-Świnoujście announce the results for 2021 [VIDEO]
2022-01-26
Hydrogen Hub at the Port of Gdynia. There is a consensus and an initial action plan [VIDEO]
2021-12-16
SHOW MORE
Meet innovative companies from Poland
SHOW