Seaports, Shipping, Logistics
The role of energy storage in the development of electromobility

Energy transformation is a process that systematically concerns all sectors of the economy, companies and individuals. One of its elements is the development of electromobility, which has recently strongly accelerated in the world, in Poland too. Polish roads are already driven by more than 40 thousand electric cars. However, how transmission networks will cope with a million cars and how important role will be played by energy storage facilities?

In January 2022, the Polish Alternative Fuels Association and the Polish Automotive Industry Association published a statistical report called "Electromobility counter". It accurately and reliably summarizes the development of electromobility in Poland. What makes us happy is the fact that the number of electric cars in 2021 increased by 120% compared to 2020. This result is pleasing and gives optimism, but on the other hand when we look at the number of publicly available charging points the situation looks not that good.

The „Counter” states that at the end of January 2022 the number of chargers is 1992, and only 600 of them are DC chargers, the so-called fast chargers. The rest are AC charging stations with a maximum power of 22 kW or less. Over the past year, a total of about 600 chargers have arrived, which is about a 50% increase. Comparing this to the 100% increase in the number of EVs, we see a significant disproportion in the growth of the number of vehicles and the development of infrastructure, without which they cannot function. The above figures show that there are as many as 20 cars per charging station.

Infrastructure problems and their solution

Polish government assumes that in 2025 on Polish roads will be moving one million of electric cars. To make it happen and to make society switch from combustion engine cars to electric cars the system of financial support is needed. It is already operating in the form of program "Mój Elektryk" („My Electric Vehicles”), but no less important is the development of charging stations infrastructure.

Implementation of the plan assumed by the government will significantly affect the increase in electricity consumption. The biggest challenge facing the National Power System will be the increased demand during peaks, the time when energy consumption is at its highest. Power grids that are already operating sufficiently during this period will be additionally loaded with the power of thousands of electric chargers.

It will be crucial for the NPS to balance energy consumption by the chargers and shift it to the so-called "night valley", and energy storage facilities will play a significant role in this. In an attempt to encourage customers to charge their electric cars at night, distributors set lower rates for nighttime tariffs, which is supposed to help relieve the strain on transmission networks during demand peaks. However, despite attempts, tens or even hundreds of thousands of electrics will be charged at peak times, with the following consequences for grid users:
- reduction in ordered capacity,
- possible voltage collapses during peak loads,
- no guarantee of stable power supply,
- high energy purchase costs that translate into high charging prices,
- frequent overloading of transmission grids resulting in more and more frequent failures.

The solution of technical limitations is equipping objects in charging stations powered by energy storage. Such duet solves above mentioned problems in case of companies, public buildings and transmission networks. Energy storages allow in easier and more effective way to balance load of transmission networks, and for recipients it means possibility of installing charger without worrying about voltage collapse and low ordered power. 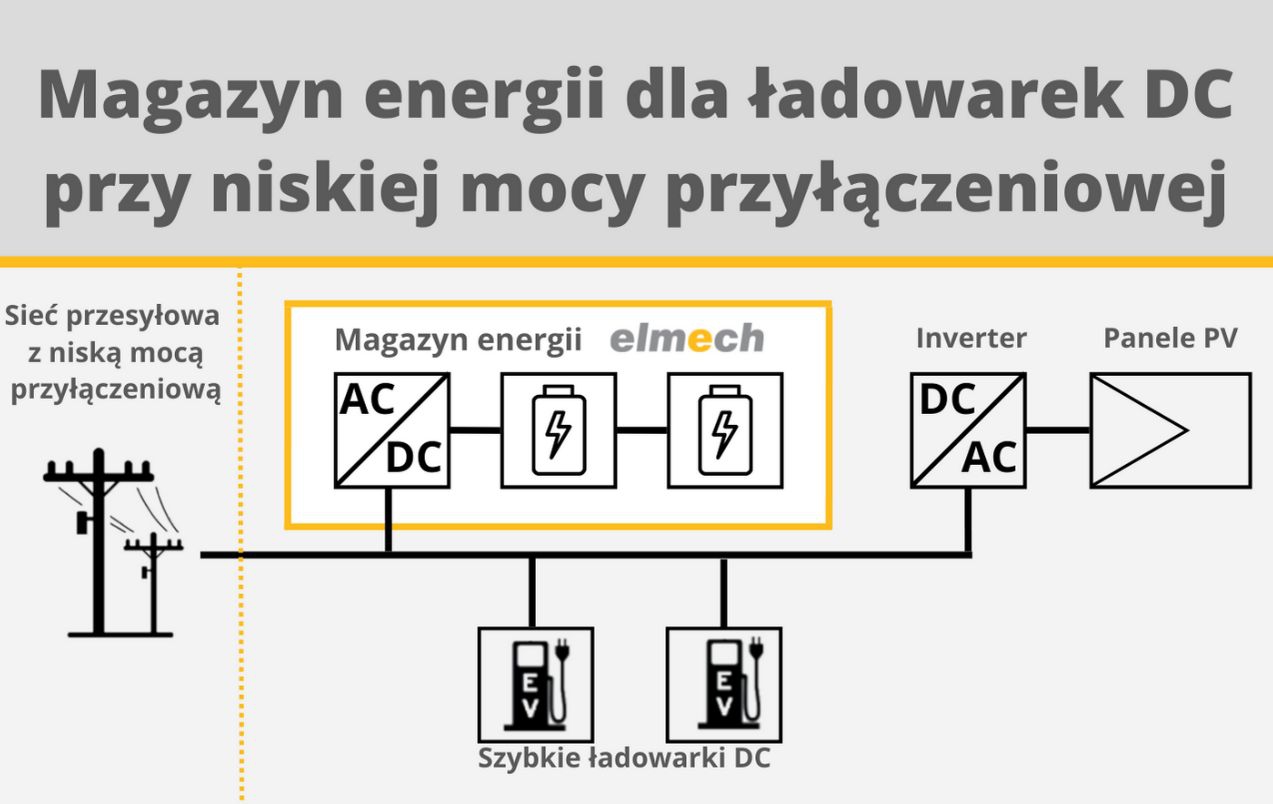 Simplified scheme of energy storage with photovoltaics and car chargers

Basic solution for facility with installed DC charging station is energy storage with power 250 kW and capacity 460 kWh. Energy storage with such parameters is able to provide a constant and stable source of power for the charger with a capacity of 150kW regardless of interruption of energy supply from the power company network or power failures, and in addition will charge:
- 3 premium class cars,
- 5 medium class cars,
- 8 city cars like Skoda Citigo.


In addition, the storage will accumulate energy from renewable sources such as photovoltaics and will become an effective source of power for the entire facility. Most importantly, it will optimize the cost of purchasing electricity consumed by the customer and reduce operating costs.

The most effective and fastest way to charge an electric car is to replenish the battery in the range of 10-80% of its charge. This is because in this range the BMS allows charging at maximum power. From a charge level of 80%, the power and charging current decreases as the battery balances and the time to charge the last 20% of battery capacity increases significantly, resulting in higher costs. This is the cheapest and fastest form of charging for electric users.

Energy storage for the company

A common place for the presence of charging stations is becoming enterprises, which increasingly decide to replace the fleet with electric. However, the choice of energy storage in terms of power and capacity will depend on the needs of the object and installed in it charging station.

Elmech-ASE energy storage will first of all bring significant economic benefits to enterprises by reducing costs of electricity purchase. Intelligent energy management will allow to purchase energy at a lower price at night, and use it during the day to charge cars and for the consumption needs of the facility.

In addition, if the company decides to install the energy storage system with photovoltaics, energy purchase prices will be even lower, and the company will definitely increase its energy independence from the grid. Elmech-ASE energy storage will help reduce the cost of electricity purchase by up to 30% per month, which will significantly reduce the company's operating costs on an annual basis. Equally important will be the reduction of the company's carbon footprint through the introduction of a fleet of electric cars and the use of RES, and the effect will be maximized by the energy storage facility, which will store excess energy production. 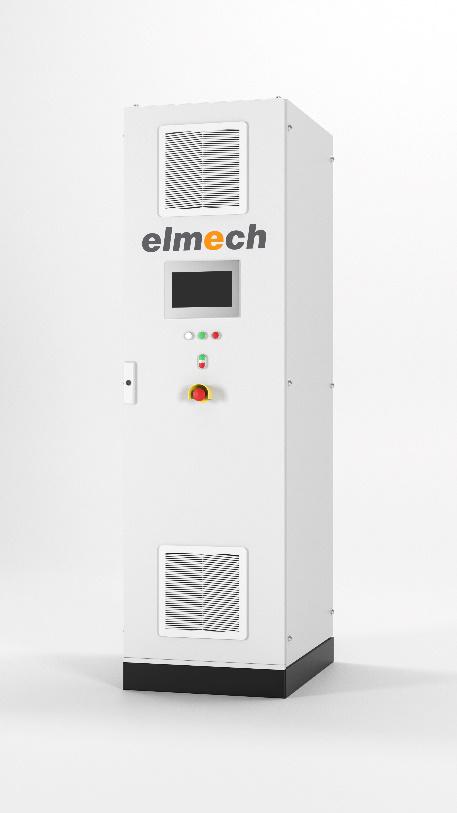 The consumer will be able to generate additional profit with an active filter that improves power quality. The tracking compensation of reactive power and higher harmonics is an additional saving. The energy management module, which is the upgraded Xinus active filter, is responsible for performing both functions.

A common problem with the installation of vehicle chargers is that the power ordered is limited and cannot be increased. In this case, the use of chargers involves regular exceeding of the allowed value, which results in additional charges, which in this situation will be regular and probably high. The energy storage facility plays the role of a "power guard", i.e. it makes sure that the power consumption from the utility's network is not higher than the ordered value, eliminating additional costs. In this situation, the salon gains doubly, because it solves the problem of low connection power and additional costs associated with the use of charging stations.

Currently, many researchers see a natural link between electromobility and storage on many levels including: technological, financial, environmental or infrastructural. Is Poland passing the electromobility test? This is currently difficult to determine, as the number of electric vehicles is relatively low. The answer to this question will be known when the Polish roads will be driven by hundreds of thousands of "plug-in" cars. However, then the stable functioning of power grids and ensuring energy supply to enterprises will depend on the number of energy storage facilities, which will significantly increase the safety and efficiency of the entire system and help reduce greenhouse gas emissions into the atmosphere.

Most recent
Marani. The first Polish solution for generating electricity from waste heat - ORC micro power plant with a capacity of up to 10 kWe [VIDEO]
2021-12-15
The Port of Gdynia electrified the railway line in the western part [VIDEO, PHOTOS]
2021-10-25
Electric ferry Fodnes from Remontowa Shipbuilding sailed to Norway
2021-02-04
ASE Technology Group has its own energy storage. It's a step towards savings and renewable energy [VIDEO, PHOTOS]
2021-10-12
SHOW MORE
Meet innovative companies from Poland
SHOW