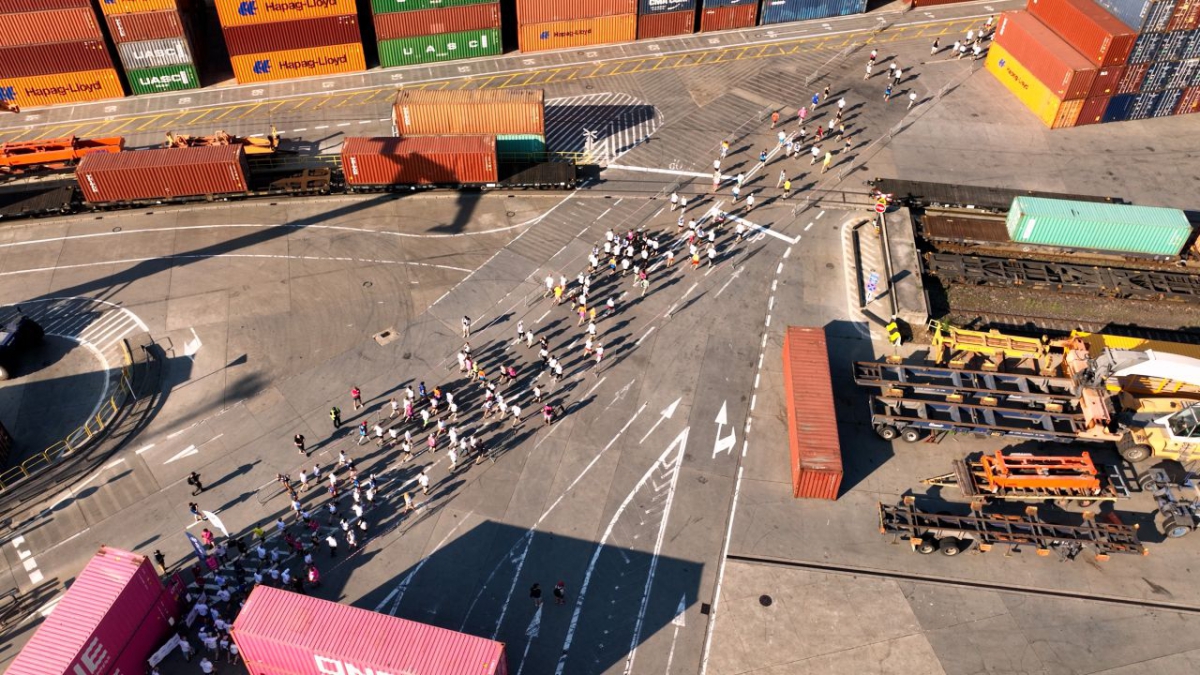 The originality of the ONE Terminal RUN Hutchison Ports Gdynia event lies in the fact that the run takes place on the grounds of the GTC container terminal, owned by the Hutchison Group. This year, those wishing to participate could start at two distances: one nautical mile (1.852 km) and 5 kilometers. The routes of both runs were laid out along the terminal's storage yards and winded between towers of containers. For those not involved in the port's cargo handling operations, it was one of the few opportunities to see what a container terminal looks like.

The run itself was accompanied by other attractions, including auctions of various prizes donated by partners, as well as a concert by heavy metal band Access Denied. There was no shortage of common warm-up and souvenir photos, and runners and spectators could take advantage of the catering zone or cool down with ice cream at the Port of Gdynia stand. The entire event was part of this year's Sea Festival in Gdynia.


However, the sporting challenges and accompanying attractions were not an end in themselves.

Indeed, Hutchison Ports Gdynia's ONE Terminal RUN once again had a charitable purpose.


– Due to the international situation and the war in Ukraine, we decided to support the center in Garczyn, which houses 135 people from Ukraine. These are children from orphanages who had to be evacuated as a result of the hostilities, along with their carers. Thanks to the support of the runners – and we managed to sell 740 race packages this year, we are very pleased with this result – as well as our sponsors, we will be able to prepare a playground for the Ukrainian children at the center – said Jan Jarmakowski, GCT's managing director.


Many people involved in the port and maritime industry on a daily basis took part in the run, including Jacek Sadaj and Kazimierz Koralewski – president and vice president of the Port of Gdynia, respectively, and Jan Jarmakowski, managing director of GCT. Many companies cooperating with the terminal and the port fielded their teams, as was evident from the players' commemorative T-shirts.

– This is the second time we have organized a run around the terminal together with the GCT terminal. This initiative was very well received by the athletes, but also by the entire port community, as can be seen by how many athletes take part in the run – both port employees and representatives of various terminals – said Jacek Sadaj, president of the Port of Gdynia Authority. – I'm convinced that it's not the result that counts, but a very good time, but I admit that I'm a bit stressed. I trained a little before the start, I hope the result will be somewhere in the middle – added President Sadaj before his start.

– We try to promote this type of activity as widely as possible, not only among our employees, but among co-workers, the local community, around our terminal. Our group attaches enormous importance to this type of activity – explained Jan Jarmakowski. – We have great partners this year: the Port of Gdynia Authority, Loconi Intermodal, Speedway Freight Services, Maritime Agency Gdynia, ECU Worldwide, Pol-Agent, UNI Logistics. These are companies that work with us on a daily basis and support us in organizing this event – said the GCT managing director.

Most recent
ONE Terminal RUN Hutchison Ports Gdynia 2022. Second edition of (probably) the only run on a container terminal in the world
2022-04-01
GCT at the Port of Gdynia. The terminal handled a record 50,000 tons of steel in June
2022-07-03
GCT modernized the Bulgarian quay
2021-12-13
GCT in the Port of Gdynia. A terminal with a lot to offer in the Polish offshore game
2021-11-12
SHOW MORE
Meet innovative companies from Poland
SHOW