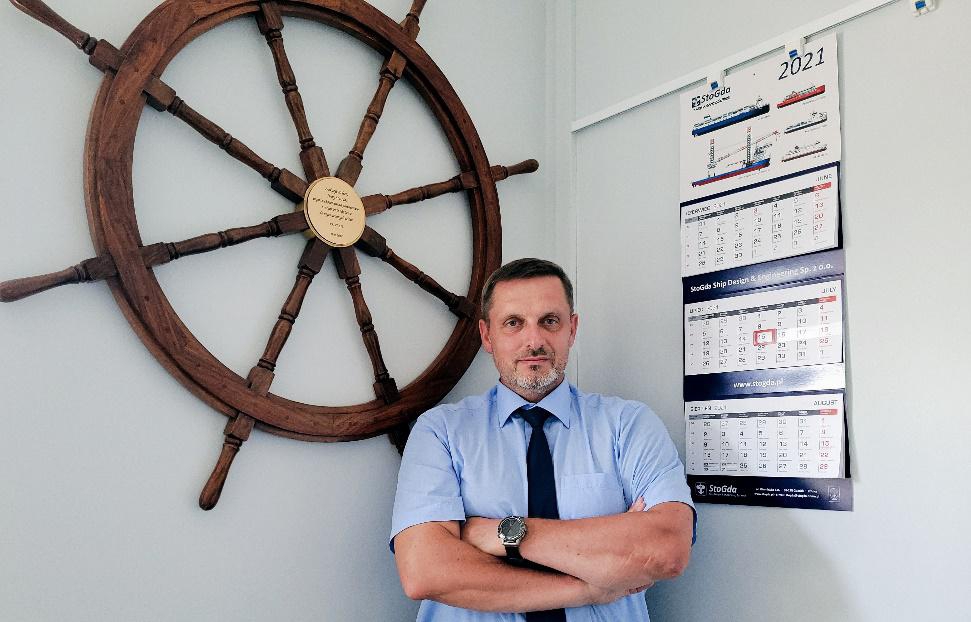 Offshore, Offshore Wind
Who is who in Polish offshore? StoGda: We have an idea for CTV and installation vessels

StoGda Ship Design & Engineering is a leading design office in Poland that has been operating on the market for 25 years. The founders of the office associated with the Gdańsk Shipyard started with the shipbuilding industry, quickly expanding the offer of services to the offshore market and energy. The office is also involved in the development of offshore wind energy through jack-up installation vessel projects. Tomasz Świątkowski, president of the management board of the Polish design office StoGda, tells about their plans in the offshore wind area.

The development of offshore wind energy opens up opportunities for Polish design offices related to maritime economy. One of them is the Polish design office StoGda, which has been operating on the market for 25 years. After the liquidation of the Gdańsk Shipyard in 1997, the founders decided to continue their activity as a private entity. Currently, StoGda offers design services for the shipbuilding, offshore and onshore industries and the energy sector.

What distinguishes StoGda from other design offices? Tomasz Świątkowski emphasizes that StoGda is a pioneer of electric shipping, i.e. battery-powered ships.

„Few know that the first such ferry built in the European Union was designed in Poland, in our office in Gdańsk. We are talking about the Elektra vessel, which won many awards, including the most important one in the world: Elektra became the "Ship of the Year 2017". This year, the fourth electric unit built according to our documentation will be put into operation,” explains the president of the office.

The office also specializes in the design of jack-up ships, i.e. self-elevating installation ships, which are used to build offshore wind farms. This adventure began in 2008.


„There are few design offices in the world that can demonstrate such credentials in this area as StoGda has. Currently, the fifth ship of this type is under construction, in the project of which we were involved,” says Świątkowski. He adds: „Today we are talking about participation in the project and construction of the sixth such vessel.”


These vessels are unusual in that they have legs mounted on which the ship stands on the bottom and rises up to 20 meters above the water level. In this position, it then assembles the turbine (including wind blades) on the foundation.

„The first vessel of this type was the self-elevating barge Thor. At that time, our participation was quite limited as the project was taken over during the construction of this unit in Greece. But it turned out to be the beginning of establishing good cooperation with the shipowner, for whom two more such vessels were later designed and built. One of them was the ship Innovation, where our scope of work was much greater than on the previous project. At that time, i.e. in 2012, it was recognized in the world as the most technologically advanced ship under construction,” Świątkowski reminds.


Another jack-up for the same shipowner, Vidar, was built on the basis of our proprietary project. The scope of work covered all design stages, from the conceptual design to the handover of the delivery documentation. StoGda's scope also included the design of the legs and the entire lifting system, which is the most important system on this type of vessel. Currently, all three vessels are successfully used to build offshore wind farms.

The next project was the Zourite - self-elevating vessel equipped with eight legs and an gantry crane instead of a regular one. The gantry crane is the largest such lifting device installed on a floating object. This vessel was used for other purposes, namely the construction of an offshore highway around the island of La Reunion, near Madagascar.

Tomasz Świątkowski emphasizes that all the vessels he mentioned were built in Poland at the Crist shipyard.

Appreciated by the international maritime industry

StoGda's participation in the aforementioned projects has been noticed and appreciated in the maritime industry. StoGda has received two jack-up awards. The first one in 2014 in the "innovative project" category within the Innovative Maritime Economy for the Vidar project. The second, the Lighthouse of GospodarkaMorska.pl in 2021 in the category of "leader of marine technologies" for the design of self-elevating units.

„Very good opinions from the operation of our jack-up ships, especially Vidar (now Vole Au Vent), strengthened our position on the market of design services and convinced shipowners to cooperate with us. One of them is Jan De Nul, for whom we have directly carried out design work on his new Voltaire jack-up, which is currently being completed in a shipyard in China. When the shipowner signed the contract for the construction of this vessel, Voltaire was the largest unit of this type in the world. As a curiosity that will illustrate the size of this ship, let me add that the top of the crane in the raised position on the legs is higher than the top of the Eiffel Tower. We are currently finishing work on this project, preparing the most important document on this type of vessel, the Operating Manual, for the shipowner,” says the president of StoGda.

At the same time, StoGda was involved in other jack-up projects.


„There was a period last year when we were working simultaneously on four different vessels. One of them was the design of a new, very innovative jack-up for the US market. The remaining works concerned analyzes checking the possibility of using ships in various conditions and adapting these existing units to work in new locations, on new wind farms, where the ground and environmental conditions are different than those for which these ships were originally designed,” he adds.

The office is working on its own CTV concept

Świątkowski informs that StoGda is currently working on its own CTV (Crew Transfer Vessel) concept, which will transport personnel and smaller equipment between the port and the offshore wind farm or SOV (Service Operation Vessel) units operating on these farms.

„Observing global markets and the directions of their rapid development, we try to ensure that our previous design experience allows us to continue our adventure with the offshore wind energy industry. And I do not only think about ships, but also about other constructions, but at the current level of talks and arrangements, I cannot reveal more details yet,” mysteriously says the president of the StoGda office.

Świątkowski emphasizes that in recent years, StoGda has been actively involved in lobbying and disseminating knowledge about the participation of Polish entrepreneurs and their previous experience in this area. Representatives of the office participate in international press conferences or in works on sector regulations. The office is also a signatory to the sectoral agreement "Polish Offshore Wind Sector Deal", which was signed a year ago in September.

„We have even prepared conceptual designs of installation ships that could be designed by Polish design offices and built in Polish shipyards. I admit that there was a time when I lost my faith in the success of this idea… For some time now, this faith has come back to me. Today, probably everyone can see that things have gone so far that, in my opinion, there is no turning back - our Polish offshore wind farms will be built in the Baltic Sea and it is only a matter of time,” says president Świątkowski.

„This belief is not without reason, because Polish entrepreneurs have been suppliers of services, equipment and structures for the European offshore wind industry for many years. These suppliers have already gained experience and very good references from previously completed projects for wind farms in Germany or Denmark. Therefore, for several months now, main foreign contractors interested in entering the Polish market have been doing research, building their knowledge about our local market and talking to Polish companies that want to be part of their supply chains. StoGda is one of those companies that participates in these talks and wants to take an active part in the process of designing the construction of foundations, towers, transformers and the broadly understood offshore fleet,” emphasizes our interlocutor.

The activities of the design office will focus not only on topics related to offshore wind farms. The company wants to develop competences in the sector of zero- and low-emission ships, because only such vessels will be designed and built in the near future.

„We plan to continue our activities in the offshore wind industry. We believe that our experience, excellent references, good opinion on the market, readiness to cooperate and very good relations with people from this industry will lead us to the point that when the train called "Polish Offshore Wind" finally starts, StoGda will be on board,” sums up Tomasz Świątkowski.