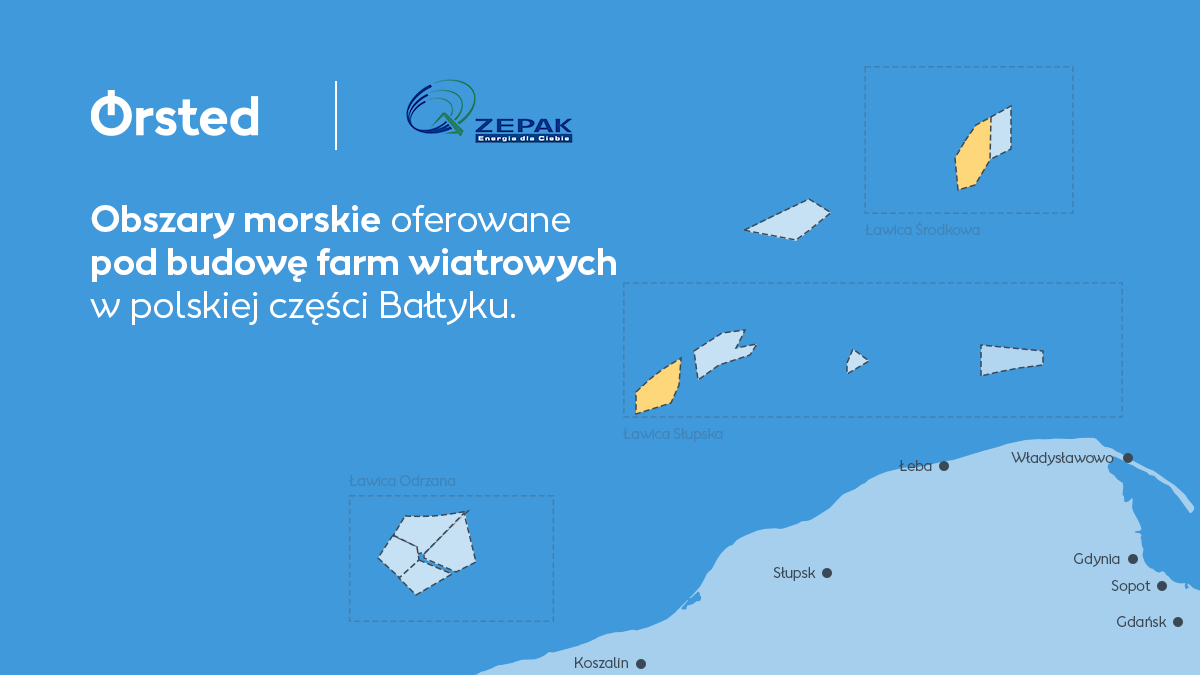 ZE PAK, one of the leaders of the energy transition in Poland, and Ørsted, a global leader in offshore wind energy, have submitted their first applications for site permits to build wind farms in the Baltic Sea. More will be submitted soon. By joining forces, ZE PAK and Ørsted will be able to build the farms quickly and efficiently and provide clean and green energy to Polish homes and businesses.

- Our joint project assumes fast and efficient construction of offshore wind farms. Once we receive the location permit, we will produce and deliver cheap and clean energy to Polish citizens. Obtaining a location permit and building wind farms in the Baltic Sea is one of the key elements of our transformation. Wind is our national asset, and we have unlimited resources of it in the Baltic Sea. Making use of this potential is one of the best ways to make Poland independent from imports of energy resources, including those from the East - says Piotr Woźny, CEO of ZE PAK.

The first applications submitted by ZE PAK and Ørsted concern the areas designated as 60.E.3 and 43.E.1, which cover 143 km² and 118 km² respectively. The partners are applying for the sites as a joint venture with a 50% stake from each party. The consortium will apply for several offshore areas for wind farms.

- ZE PAK and Ørsted are playing as a team. Based on a combination of local and global experience, we want to build large-scale clean energy production from Baltic wind to support Poland's green transformation, which includes ZE PAK's transition from fossil fuels to renewable energy sources by 2030. By expanding the scale of our operations in Poland, we will be able to engage even more strongly in the development of the Polish economy by, among other things, making infrastructure investments, creating new jobs, and training miners as part of the skilled workforce that will be key to driving the energy transition - says Rasmus Errboe, Ørsted senior vice president and head of Continental Europe at Ørsted.

Among the joint initiatives of ZE PAK and Ørsted is the creation of the Fair Transformation Fund for Eastern Wielkopolska with a budget of 10 million euros (about 50 million PLN). The money will be used, among others, to develop jobs in the region especially exposed to the economic and social effects of coal phasing out, as well as for education and development of green innovations.

- Construction of wind farms is one of the pillars of the green transformation of ZE PAK and the whole Poland. The electricity generated by one turbine (12 MW) can power on average over 23,000 Polish homes per year. And one wind farm can even consist of dozens of turbines. What is more, thanks to the operation of one turbine over 50 thousand tons of greenhouse gas emissions are avoided annually. Thanks to the output of a 1 GW wind farm we will reduce emissions by more than 3 million tons per year - this is as much as is emitted by 1.5 million cars - adds Piotr Woźny, president of the board of ZE PAK.

ZE PAK and Ørsted have applied for location permits for the wind farms as part of the second phase of market development, where the Polish government is to allocate 11 sites with a total estimated capacity of about 11 GW. Success in this administrative proceeding will pave the way for the companies to participate in the planned auctions for Contract for Difference (CfD) support in 2025 and 2027.