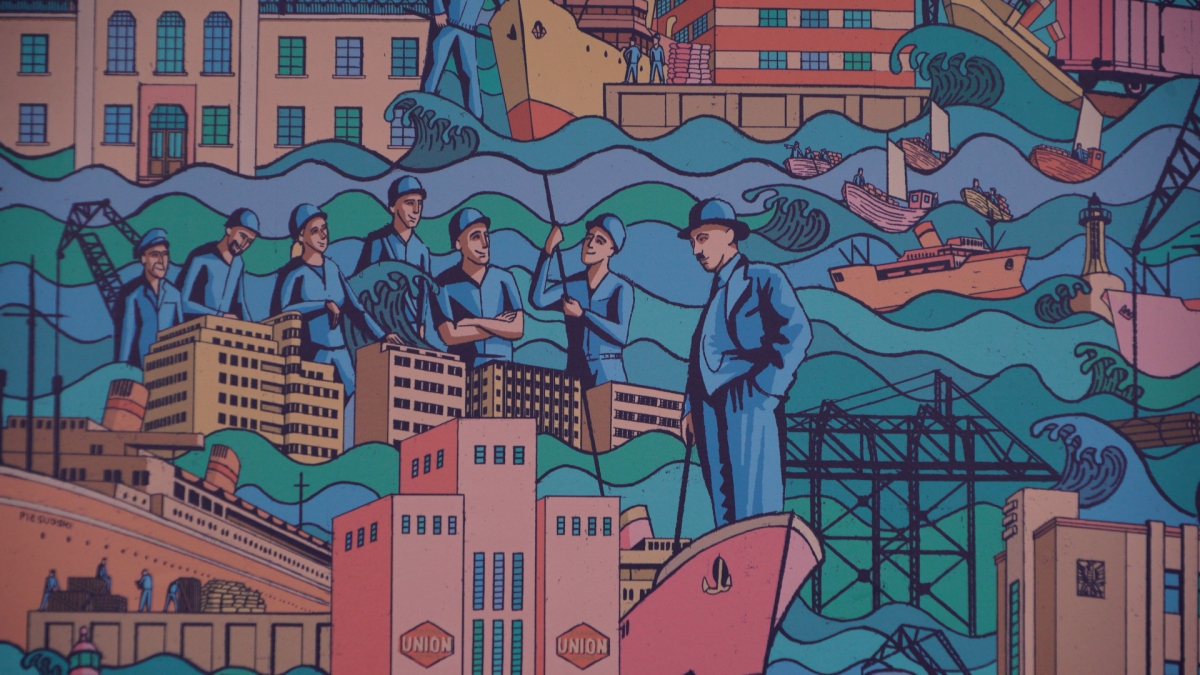 Seaports, Shipping, Logistics
[VIDEO] 100th anniversary of the Port of Gdynia. Cooperation with a young artist from Gdynia

The Port of Gdynia begins celebrating its centenary and reveals some of the details of the celebration. A young, but already respected artist from Gdynia, Jan Rutka, will help.

The Port of Gdynia, celebrating its centenary this year, begins the celebration of the jubilee. One of the languages in which the history of the port will be told will be the language of art. That is why the port has established close cooperation with a young artist from Gdynia, Jan Rutka.

Gdynia residents and tourists coming to the city can associate Jan Rutka's works with city posters and other graphics depicting the city's modernist architecture. Rutka himself, currently studying at the fifth year of the Academy of Fine Arts in Gdańsk, is a fourth-generation Gdynia resident and emphasizes his attachment to the city and the port.

An excellent sense of the character of the city and the port made the Port of Gdynia offer the artist cooperation in the celebration of the 100th anniversary of the port. Although the celebration will last all year round, and therefore many graphic elements and works are yet to be created, some of them are ready and can be admired. One of the used mediums was a special calendar with Rutka's works.

- The port and the city were and are inspirations for artists who describe reality in painting or sculpture. Today, on the centenary of the Gdynia port, we would like to celebrate it with the works of one of Gdynia's artists, Jan Rutka, who devoted his works to port and city, and to the people who built both the port and the city - says Kazimierz Koralewski, Vice President of the Port of Gdynia Authority. - Today, in the centenary of the port, we must remember to also act pro bono. We will be auctioning off one of Jan Rutka's works. We will donate the income to local St. Lawrence hospice - announces Koralewski.

As Kazimierz Koralewski says, Rutka's works are also already published in other brochures and advertising materials related to the anniversary of the Port of Gdynia. - Art leaning against the sea, port, is worth publishing widely and acquainting the audience with this work. Hence, we also contribute to its promotion by supporting one of Gdynia's famous artists - he adds.

Descendant of Captain of MS Batory


Jan Rutka was interested in art, as he says himself, since he could hold a pencil and draw. Architecture, especially Gdynia's modernism, has always been the subject closest to him.

- I look back in time. I try to simplify as little as possible. The period of the turn of the century, art deco, the moment when Gdynia began to take shape, i.e. the transition from academism to modernism, is my greatest inspiration. In my opinion, this is the best period in the history of art - he says.


The artist says that he immediately agreed to the offer of cooperation with the port. - If not for the port, Gdynia and us would not be here. I feel honored to be able to celebrate such an important jubilee as the centenary - he says. He also emphasizes that he has strong family ties to the port, showing photos of his great-great-grandfather on board MS Batory. - My great-great-grandfather came here after he graduated from the maritime school in Tczew, and started sailing on the SS Warsaw, and then, after the war, he was the captain of the MS Batory ship. In turn, my second great-grandfather settled in Gdynia out of love for the sea. He co-created a group of marine artists here and painted port and coastal landscapes - says Jan Rutka.


The works created by Rutka refer to Gdynia modernism, which makes them unique. As part of his diploma thesis, the artist creates several meters high graphics depicting his district – Działki Leśne. The graphics created for the port and the city do not lack the most characteristic objects, as well as famous ships. - Ships are difficult, at least for me, because I have always dealt with architecture, although in Gdynia's architecture the streamline, that is a reference to the shape of ships, does exist. I focus especially on older constructions, floating masterpieces, such as MS Piłsudski, MS Batory or Stefan Batory. These were our windows to the world and the Polish representation at sea. Many great artists co-created them, from tableware to shape. This is a beauty that has already been somewhat forgotten. You don't think of ships as works of art anymore, they only have utility value now - says the artist.

Where did the idea to collaborate with the artist on celebrating the centenary of the Port of Gdynia come from?

- We have decided to tell the fascinating history of the hundred years of the Port of Gdynia in a new, attractive way that will interest both the inhabitants and all those who visit our city in large numbers, all who fell in love with Gdynia. Celebrating the centenary of the port that created our beautiful city will have many local touches. In fact, we celebrate the centenary throughout the year. On February 10, on the city's birthday, we would like to invite you to the opening of a unique exhibition at the Gdynia City Museum "Sea, city, port told in art ”- invites Aleksander Wicka from the marketing department of the Gdynia port.

Most recent
The fairway to the Port of Gdynia will be deepened
2022-02-10
HW Wind course in Gdynia Maritime School
2022-02-04
Both storage yards of the Logistics Center in Gdynia will be ready six months ahead of schedule
2021-12-24
The ports in Gdańsk, Gdynia and Szczecin-Świnoujście announce the results for 2021 [VIDEO]
2022-01-26
SHOW MORE
Meet innovative companies from Poland
SHOW