Baltic Surveyor is a new technologically advanced vessel in the fleet of Baltic Diving Solutions. It is a specialized floating hydrographic laboratory, which can be used for survey, ROV work and environmental research. However, this is only a part of its many capabilities.

Baltic Diving Solutions (BDS) as a company specializing in underwater works has gained experience over the years in Europe, West Africa, Caspian Sea and Middle East.

As the operator of the first Polish service catamaran for offshore wind energy, Baltic Jet, the BDS team managed to find a vessel that has a chance to play a big role in the Baltic Sea. It is worth remembering that further survey campaigns will start in the Baltic Sea later this year in connection with Polish offshore development.

- Considering the fact that on each industry occasion the topic of building the Polish installation fleet comes up again, for two years we have been looking for a vessel for specialized surveys as well as subsea and diving projects - says Krzysztof Stopierzyński, the president of Baltic Diving Solutions.

The answer to Baltic Diving Solutions' needs was found in Denmark. 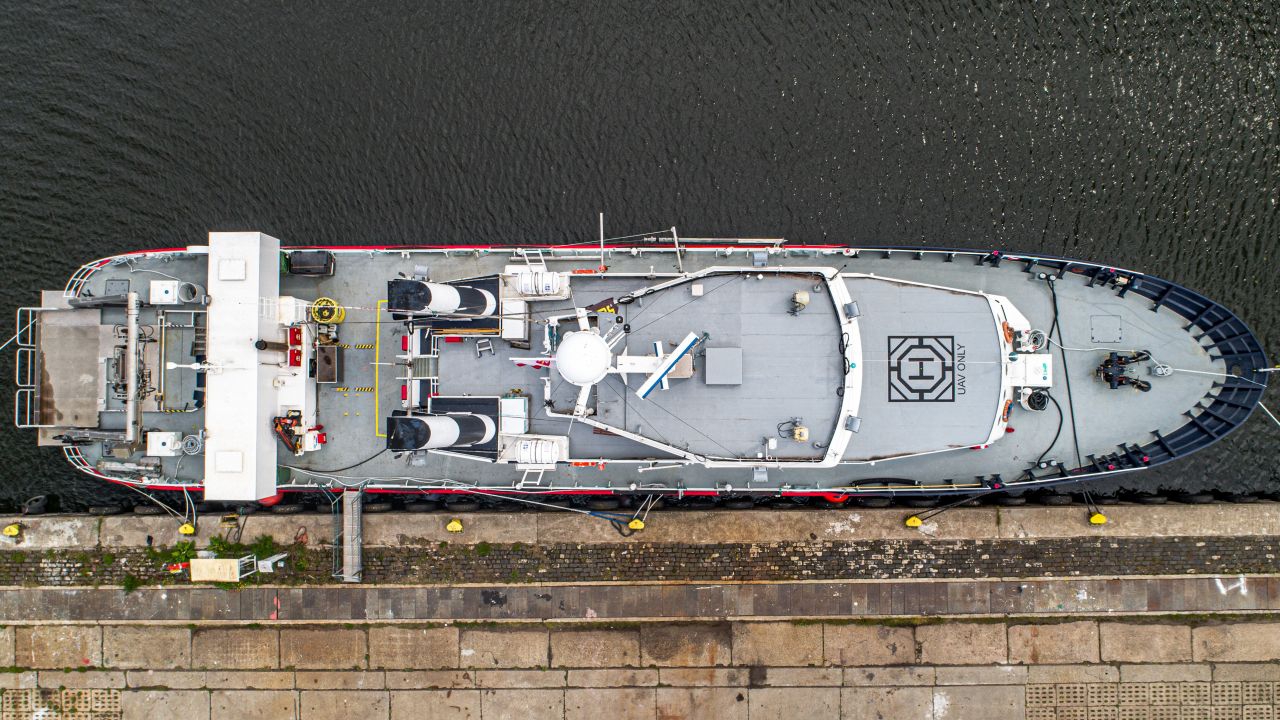 - Baltic Surveyor is a vessel whose owner dealt with specialized survey campaigns for offshore wind energy. We had the opportunity to see her at work - he reveals.

It is important to note that the new acquisition of Baltic Diving Solutions worked on the construction of the Baltic Pipe pipeline. - This is a first-hand purchase, which we managed to buy from our partners, says the CEO. - We can reveal the fact that she was originally built as a patrol boat for German customs officers and the material she was made of was aluminum, which is unique in vessels of this size today.

A Danish survey company bought the vessel from the German government and then did a full conversion to a dynamically positioned hydrographic survey vessel.

What does this exactly mean?

- Baltic Surveyor has been upgraded with equipment we are interested in. It is a dynamic positioning system, hydrographic equipment or moonpools and side-poles for a whole range of research equipment, including a multibeam echosounder, USBL system, sub-bottom profiler, towed devices. The previous owner managed to transform the vessel into the form in which we can use its functionality today - says Krzysztof Stopierzyński. - We are extending this functionality with solutions which we have implemented in our company. For example, the unit is equipped with the V-Sat satellite internet and additionally we have equipped it with the Starlink supporting the work of fully equipped Survey Room. We can acquire survey data which is transmitted to shore and processed by the client live in the office.

The vessel was equipped with new engines, steering and control systems, electronics. - The hull was left over from the old unit, and the fact that it is aluminum means that it will literally last forever - the new owner tells us.

BDS deals with, among other things, UXO's - the identification and recovery of unexploded ordnance from offshore areas, so having a unit that has an amagnetic hull is very helpful for ferromagnetic surveys. The aluminum hull is also an additional advantage due to its unique lightweight construction. And this translates into surprisingly low fuel consumption. It allows for considerable savings even in relation to much smaller units. - It burns about a thousand liters for 24 hours of survey - says Stopierzyński.

This is not the end of the good news. BDS's new acquisition is environmentally friendly and the equipment is truly impressive. At that time no one was saving on the interior design.

- As far as the technical aspect is concerned, we appreciate the dynamic positioning of the vessel - a computer-controlled propulsion system that precisely keeps the vessel in place or moves it in any direction - says Michał Zientarski, fleet manager at Baltic Diving Solutions. 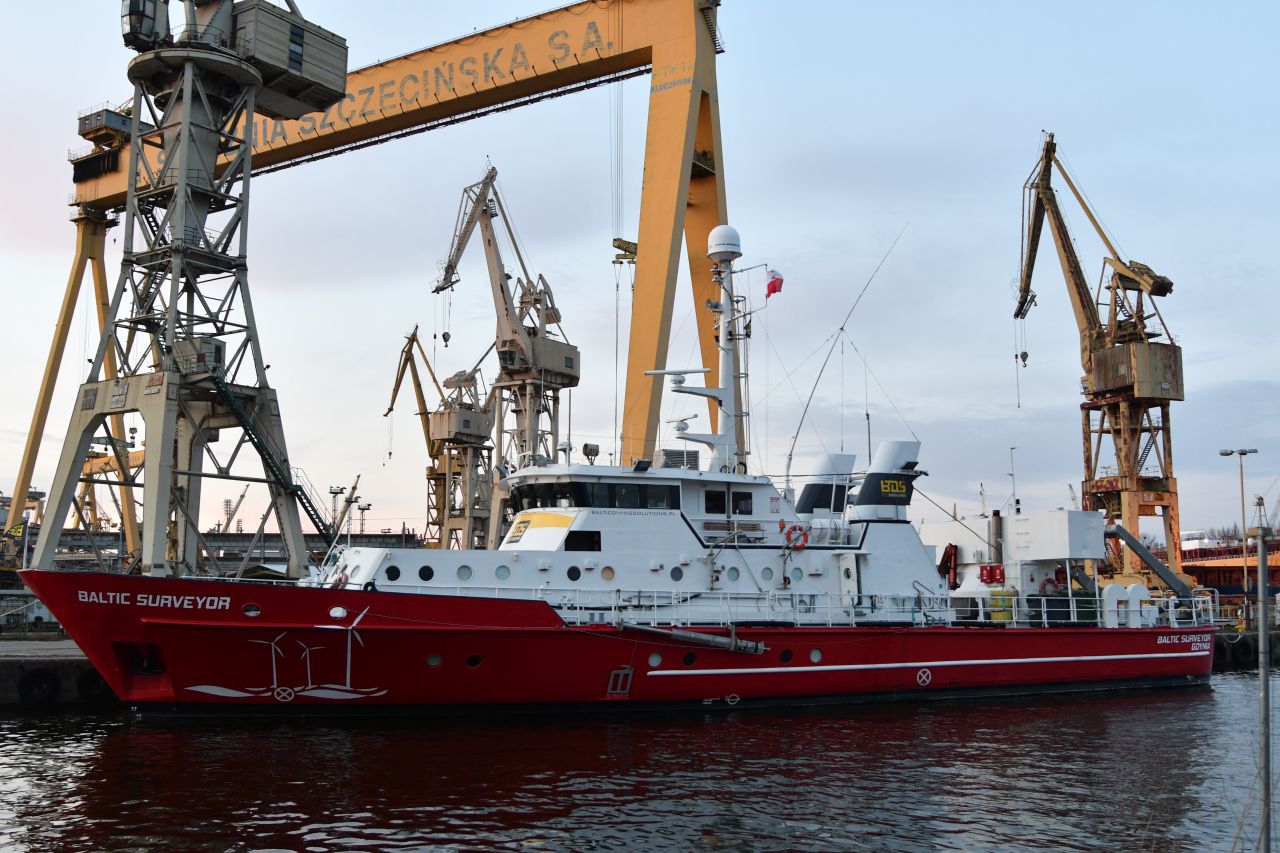 He points out that the Baltic Surveyor system is based on two propulsion systems that can work together or independently - a classic one based on an adjustable CPP propeller and two 360° pump jet thrusters controlled by modern Volvo engines. The unit also has an electric bow thruster.

Another advantage is the ship's generator set - two generators power the vessel and the third, located in a separate engine room is used to power the project equipment - ROV or diving system.

The unit also has a A-frame with a 4-ton winch mounted at the stern. With the A-frame other survey equipment can be lowered into the water - it was used, among others, to do seabed surveys with the CPT probe and to lunch the ROV. Currently, the unit is equipped with ROV Saab Seeye Falcon, which is the industry standard for offshore wind work.

- After the purchase we have put the vessel under the Polish flag and she has passed all inspections required by the administration, but also by the clients - including IMCA. The unit has DNV class renewed last year, which was for us a guarantee of high level of technical condition of the unit. The quality of her work has been confirmed during the construction of Baltic Pipe. Such opinions are very important to us due to the plans to use her in Polish wind projects - points out Stopierzyński.

Baltic Surveyor is ready for offshore. It is already well known in the industry

Baltic Diving Solutions is already planning works in which the new purchase will prove useful. These are mainly environmental surveys such as geophysical and smaller geotechnical surveys, hydrographic surveys, as well as sampling, bird and bat migration surveys, i.e. – in fact most of the surveys performed in the process of wind farm design.

- We also see a role for Baltic Surveyor in installation activities through the ROV. The unit was prepared to support the first projects that BDS was approached with. It is about supporting cable laying and construction operations - the CEO reveals. This involves work on three German wind farms around the island of Rügen.

Last year, a British company preparing equipment for offshore work designed and built in Dubai a containerized diving system compliant with IMCA D 023 for offshore work equipped with a three-diver steering station and a decompression chamber. The system is currently being integrated with the Baltic Surveyor vessel.

- Already last year we acquired an ROV, in a configuration designed for inspection, cable and UXO works. We bought it with the idea to reduce the risk when working with explosives, conventional munitions or chemical weapons. It is important to carefully inspect places where the risk of UXO is high, both for us and for developers - says Stopierzynski.

He reveals that the purchase of the ROV has matched perfectly with the recent acquisition of Baltic Surveyor. 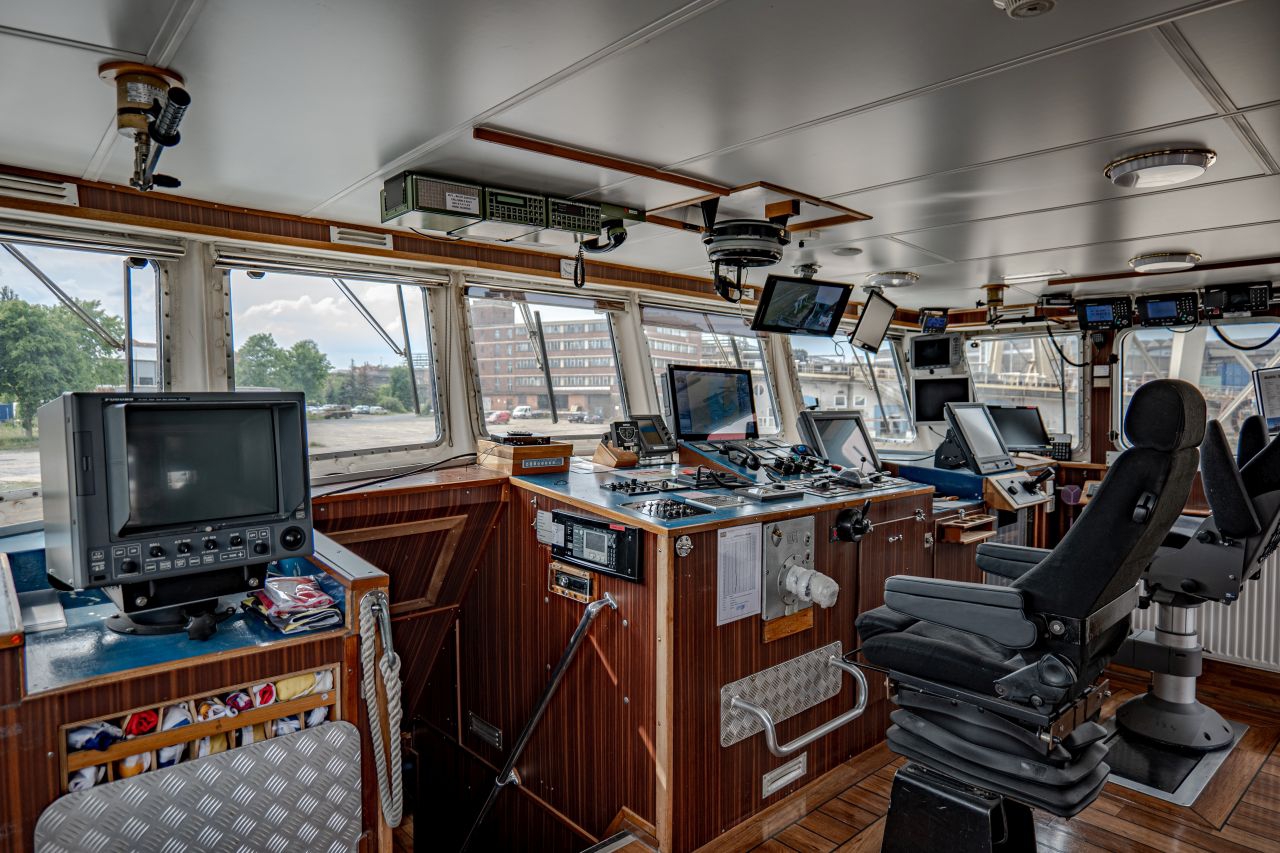 - We see the future positively and we already know that we are well prepared for the emerging offshore industry in Poland. Our equipment is ready to work and does not wait passively, but supports the projects of our foreign partners - sums up Krzysztof Stopierzyński.

Baltic Surveyor is currently stationed in Szczecin and has been in Baltic Diving Solutions' resources since the beginning of April.

Most recent
Lotos Petrobaltic: we are talking about a dozen or so vessels for offshore service
2022-02-16
PGE and Ørsted are launching a tender for the rental of offshore wind turbine installation vessels for OWF Baltica
2022-01-30
Crist shipyard: cutting metal sheets for a specialized vessel for tunnel construction [PHOTOS]
2021-10-28
Safe Shipyard is building a Shoalbuster vessel for Fairplay Towage together with Damen
2021-08-17
SHOW MORE
Meet innovative companies from Poland
SHOW