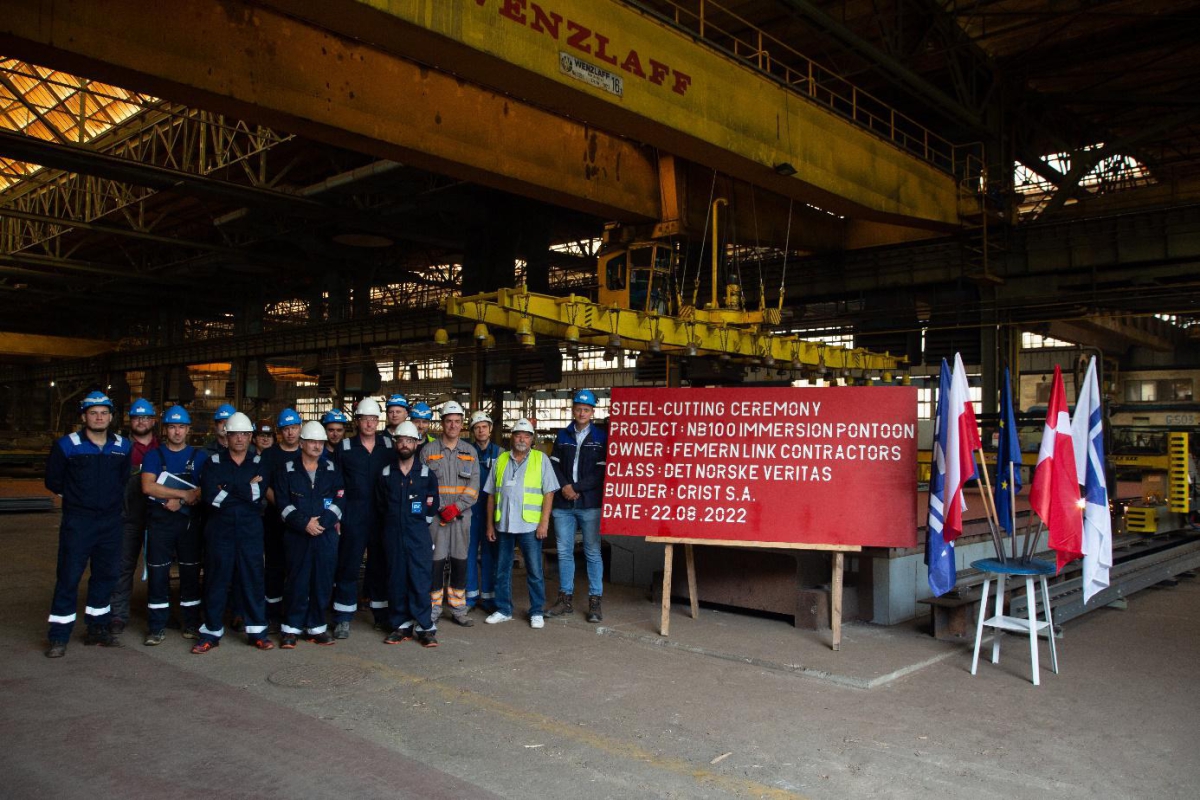 Shipyards
Crist shipyard. Steel-cutting ceremony for the construction of a specialized pontoon

On August 22, at 10.00 a.m., the ceremony of cutting steel for the needs of the new, second project for the FLC shipowner began at the Crist shipyard. Thus, the construction of a specialized pontoon with the working number NB100 was officially started.

Link Contractors (FLC), the contractor for the pontoon, is responsible for the construction and installation of the submersible tunnel under the Fehmarnbelt between Germany and Denmark. The tunnel will be approximately 17.6 km long and will consist of several dozen prefabricated elements. They will be transported and installed on site using the so-called submersible pontoons connected by a crane truss. Their construction has just started at the Crist shipyard. They have been given the construction number NB100.

The pontoons can be used in various configurations to install both large and smaller tunnel elements. They are designed to work in the Fehmarnbelt tunnel area for the sole purpose of installing the tunnel components. The pontoons with the truss were given the working construction number NB100. The project will be equipped with generating sets, a system of winches and lifts, a hydraulic system and a number of other specialist equipment necessary for the implementation of such a large and unusual project.

It is worth recalling that last year Crist started the first project for FLC, i.e. the construction of a multifunctional pontoon (MPP) with a submersible charging tool (SDT), which will be used to lay the foundation for the above-mentioned tunnel. The vessel under construction will have a hull with a length of 130.2 m and a total length of up to 149 m with conveyor belts, while the total width will be 48 m. The pontoon will accommodate 19 people working in two shifts.

This multi-billion European project proves that the Crist company presents great opportunities, excellent preparation, as well as reliability, responsibility and comprehensive knowledge to carry out such responsible projects. Crist shipyard won the contract after passing many financial and technical audits, and the consortium commissioning it see Crist as a stable and reliable partner in such demanding projects. The implementation of such a complex project confirms Crist's well-established position in the market of specialist units.

Most recent
[VIDEO] Another eco-friendly electric ferry launched at Crist shipyard. Charging takes a few minutes
2022-07-14
Crist Shipyard. Another mega block sailed to France [VIDEO]
2022-06-14
A delegation from the Democratic Republic of Congo visits Crist S.A. [VIDEO]
2021-12-13
Crist Shipyard is the winner of the Exporter of the Year to France competition
2021-11-29
SHOW MORE
Meet innovative companies from Poland
SHOW