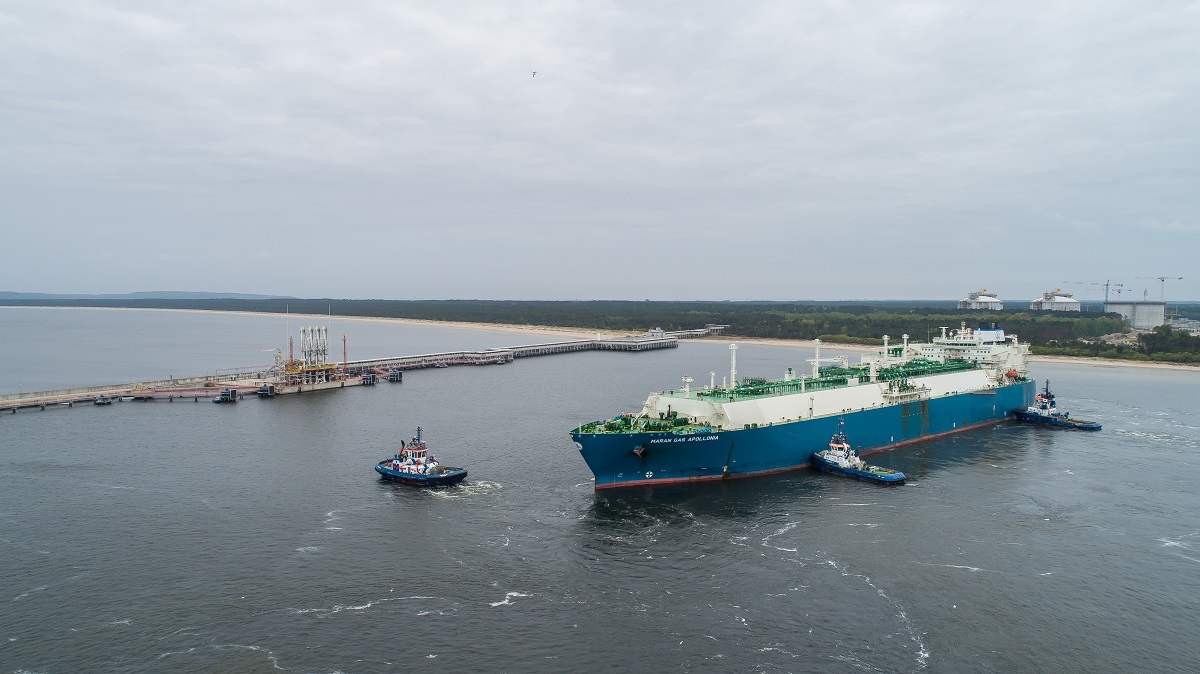 The tanker Maran Gas Apollonia with the cargo of over 65 thousand tons of liquefied natural gas arrived at the President Lech Kaczyński LNG Terminal in Świnoujście. This is the first delivery made on a vessel chartered by the PGNiG Group. It is also the first shipment PGNiG has received from Venture Global LNG who will soon be a major supplier to Poland.

- This is the first time the LNG cargo has been delivered by a vessel chartered by the PGNiG Group opening a new chapter in the Group's operations on the global LNG market. Until now, we have only purchased LNG cargoes with transport provided. Now we also are able to purchase gas directly from liquefaction terminals under free-on-board contracts. This definitely broadens our possibilities of securing liquefied natural gas volumes - stressed Iwona Waksmundzka-Olejniczak, President of the Management Board of PGNiG SA. - The last year on the European gas market has clearly demonstrated the importance of access to diversified and reliable sources of gas. LNG offers such access, hence the huge growth of interest in liquefied natural gas among European companies. Acting in advance, PGNiG secured a solid foothold on the LNG market, so now we can effectively use our competences and capabilities to strengthen the energy security of our customers - she added.

The tanker Maran Gas Apolonia brought over 65 thousand tons of LNG, which corresponds to over 90 million cubic meters of natural gas after regasification. The cargo was loaded at the Calcasieu Pass liquefaction terminal in Louisiana, owned by Venture Global. Starting next year, PGNiG will start receiving 1.5 million tons of LNG per year (2 bcm of natural gas, after regasification) from the Calcasieu Pass terminal under a long-term contract. PGNiG also has a long-term agreement with Venture Global to receive 4 million tons per year (approximately 5.3 bcm of natural gas, after regasification) from the Plaquemines liquefaction terminal in Louisiana.

- Venture Global is proud to celebrate this historic milestone with our partner and largest customer, PGNiG - said Mike Sabel, CEO of Venture Global LNG. - Poland’s foresight and proactive strategic planning for its energy security needs has put it in a position of strength today. Our company is proud that under long-term agreements with PGNiG we will soon be supplying LNG, which will help meet a significant share of the Polish demand for gas. These long-term FOB contracts will make PGNiG not only a consumer but also a regional leader in LNG supply and trading - Mr. Sabel added.

Both long-term contracts with Venture Global are based on FOB formula. In order to receive gas purchased under these contracts, PGNiG has started to develop its own fleet of LNG tankers. The Group has chartered eight units, each with a capacity of 174 thousand tons of liquefied natural gas, that will be built exclusively for the PGNiG Group. The first two tankers will enter into service next year, the next two - in 2024 and the remaining four - in 2025.

Due to the recent intensification of LNG imports by PGNiG, the Group has decided to charter three vessels already this year, two of them in the first half of 2022. One of them is Maran Gas Apollonia, whose owner is Maran Gas Maritime, a company owned by the Angelicoussis Group. Maran Gas Maritime will also be the owner of two of the eight gas carriers being built for the PGNiG Group.

- Maran Gas is truly honored to be PGNiG’s shipping partner in this major milestone. This “first” comes soon after PGNiG and Maran Gas entered into long term charter contracts for 2 LNG carriers in support of Poland’s efforts to diversify and strengthen its LNG supply chain. In the face of accelerated trade growth, within a world that is significantly more fragmented than a few months ago and with rising environmental challenges, such a partnership between two strong European companies is more relevant than ever - said Sveinung J. S. Stohle, Angelicoussis Group Deputy CEO. - Maran Gas’ mission is to provide world class shipping services to its clients in a safe, reliable and sustainable manner whilst embracing the energy transition. We do that with integrity, keeping a sharp focus on delivering cargoes efficiently and on time in line with our clients expectations. Last but not least, at Maran Gas we take the long-term view on our relationships, our people and our ships. We are, therefore, very excited to be a key shipping provider for PGNiG’s long term LNG supplies to the Polish market - he added.

On May 6th, the PGNiG Group took delivery of the first LNG shipment outside Poland, which was delivered to the LNG terminal in Klaipeda, Lithuania. Most of the gas delivered there was sent to Poland via the newly opened Poland-Lithuania gas pipeline, and some was offered to the Baltic States market.