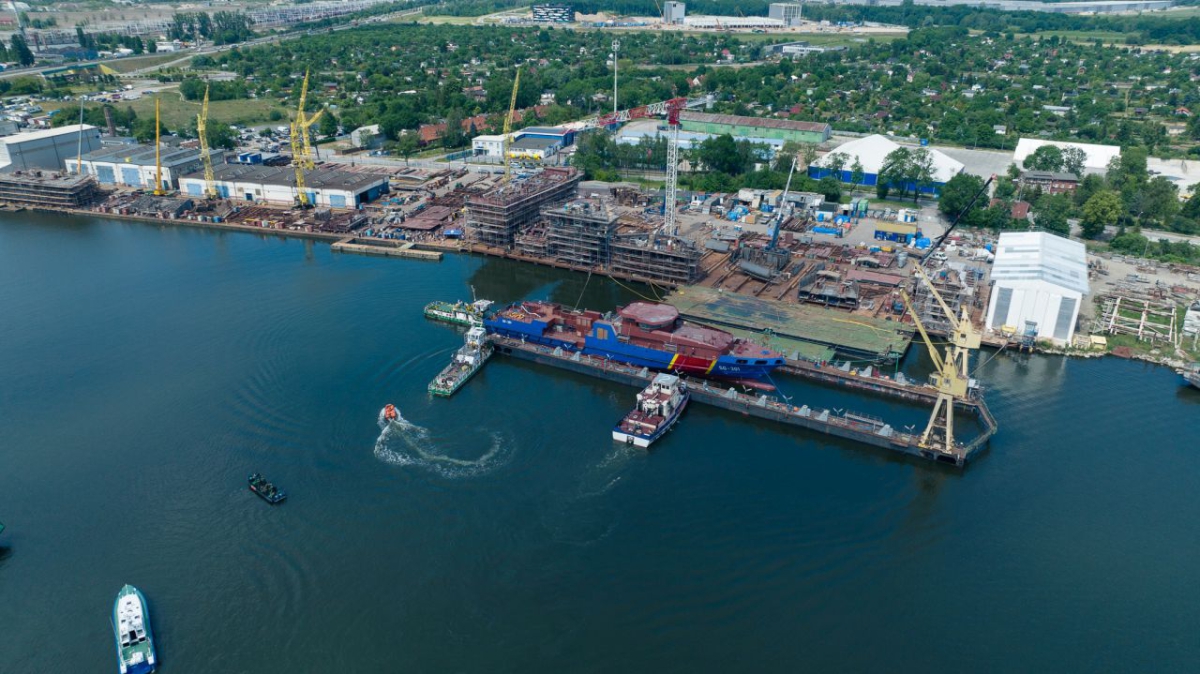 Work on a multipurpose seagoing patrol vessel for the Maritime Division of the Border Guard is at the halfway point. The partially equipped hull built by NavireTech has just been launched.

Commissioned by the French shipyard Socarenam, which won the tender to build the patrol vessel, the hull was built in Poland by NavireTech shipyard. Construction of the nearly 70-meter vessel began last year. Sheet cutting was done at the Crist shipyard in Gdynia, and the keel was laid in June 2021 at the Marine Stal wharf. After a year of work, the hull, along with the superstructure and partial equipment, was launched - first it was moved from the quay to the floating dock, and after the dock was submerged, the vessel was towed from it and moored at the Marine Projects shipyard quay. The hull will soon be towed to a shipyard in Calais, France, where it will be fitted out. According to the schedule, the Marine Unit of the Border Guard will take over the vessel in 2023.

For NavireTech, building the entire, partially equipped hull of the patrol vessel in Poland was a new challenge. As Artur Nastkiewicz, the company's managing director, explains, the company has experience in building these types of structures, but usually does so under different conditions.

- My company has built several hulls for Socarenam shipyard, among other patrol vessels. But this is done in France, in a shipyard that is dedicated to this purpose. Here we were put to the task of building this hull in Poland. We were not prepared for this, as we do not have a shipyard in Poland in the sense that we have docks, wharves, production halls. We are adapted to cooperate with Socarenam by producing sections, which we transport to France and there we conduct the assembly under their conditions. Here we were put in a position where we had to deal with construction on site. So we had to arrange this shipyard - explains Nastkiewicz.

The NavireTech director adds that the so-called "strong hull", i.e. the steel structure of the ship itself, was already ready since March. However, it was decided that some of the outfitting work would be done on site.

- We could have passed this hull as early as March. On March 30, we completed the construction of the so-called "strong hull" and it could have been towed away by then. But this outfitting work, which took place from March until today, makes it possible to carry out further outfitting in France more quickly - Nastkiewicz explained. 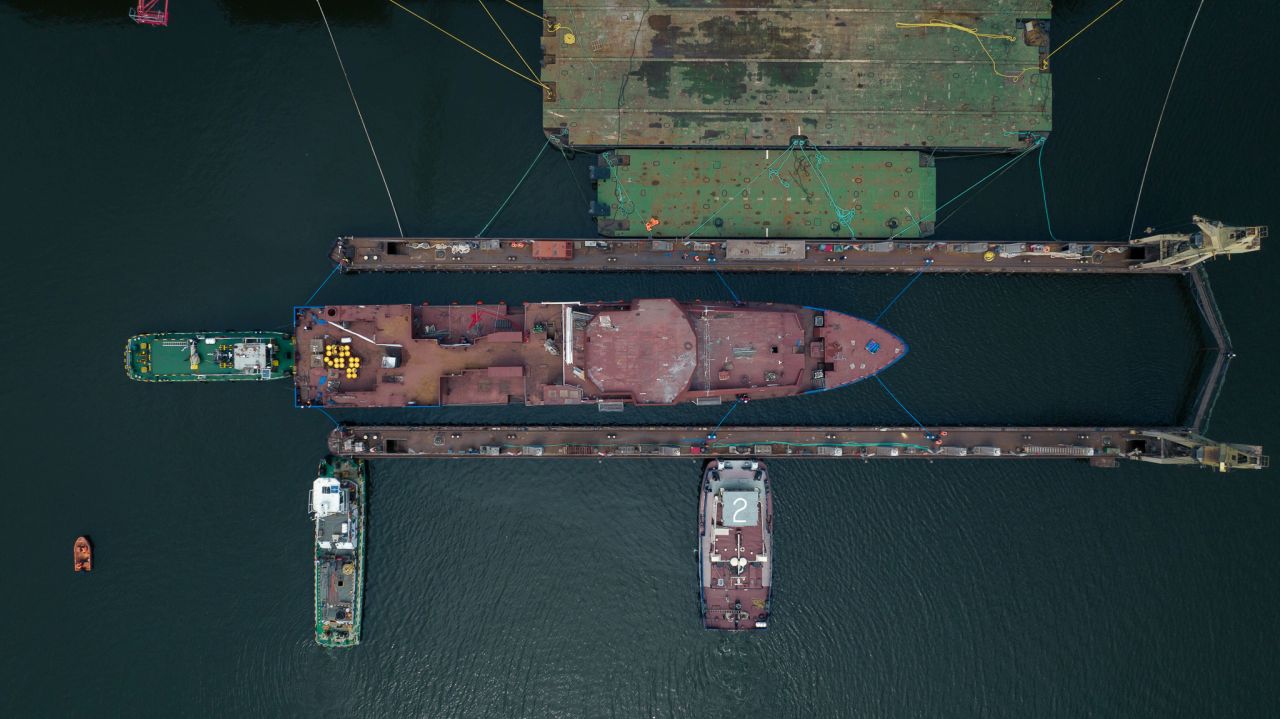 As the NavireTech director emphasized, for this reason the official launching of the vessel was symbolic. The hull had already undergone immersion tests. On June 29, however, it was towed from the dock at the Marine Projects shipyard in the presence of guests and media. The ceremony was attended by representatives not only of the future shipowner, the Border Guard, but also of many Polish companies involved in the construction, as well as a guest from France - Philippe Gobert, president of the Socarenam shipyard.

- This is a very important moment in the life of the Marine Unit of the Border Guard, as this is the first such large vessel to be launched - said Lieutenant Commander SG Andrzej Juźwiak, spokesman for the Commander of the Marine Unit of the Border Guard in Gdansk. - The main tasks that the patrol vessel will face are, of course, service in the protection of the external maritime borders of Poland and the European Union. This will take place mainly in the Baltic Sea and the Mediterranean Sea. But it also needs to be clearly emphasized that this is a patrol vessel intended for participation in multi-purpose international maritime operations coordinated by the European Border and Coast Guard Agency Frontex - explains Juźwiak.

The patrol vessel will carry the side number SG-301. With a length of almost 70 meters, it will have a draft of up to 3 meters and a width of 11 meters. The vessel will carry 20 permanent crew members, but space is provided for a total of 35 people. Due to its purpose, there will also be a room at the stern that will accommodate up to 250 people for up to 24 hours, such as survivors taken from the sea. A representative of the design bureau explained that the patrol vessel is ice-classed, and has also been equipped with a landing pad for a drone, while the aft section will also have space for two containers, so that SG-301's equipment can be adapted to current tasks. The patrol vessel's equipment is supplemented by water cannons for firefighting operations, two RIB motor boats along with hydraulic cranes for lowering them. Another hydraulic crane will be designed to handle containers with equipment, supplies and assist in oil pollution elimination actions. 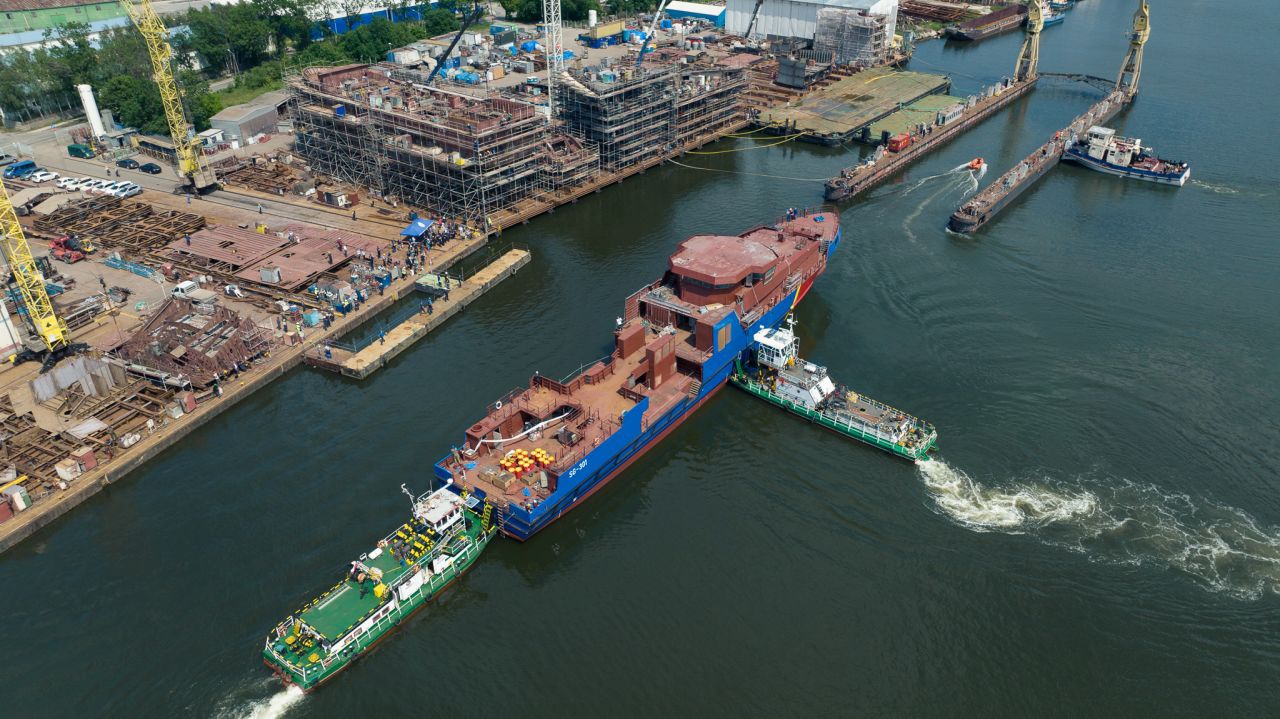 SG-301 will have a diesel-electric propulsion system with azimuthal thrusters that will allow it to develop speeds of up to 19 knots. A thruster will be installed on the bow, which will increase the ship's maneuvering properties. Of course, the vessel will operate an exhaust gas treatment system, a sewage and bilge water treatment system and a system for generating fresh water from the sea.
The ship is being built in the "design and build" mode. The value of the contract is about 111 million zlotys, of which up to 90 percent comes from the European Union's Internal Security Fund, and the rest is covered by the state budget.

- Above all, I feel joy that such an important part of this project has been finalized, as we are at the halfway point of the construction of a patrol vessel for the Marine Unit of the Border Guard. What remains is to wish all the officers who will sail on this vessel that this service will be safe and comfortable - enthuses Lieutenant Commander SG Andrzej Juźwiak.

Artur Nastkiewicz of NavireTech says that the construction of the partially equipped hull of the patrol vessel for the Border Guard shows that the company is competent to carry out such orders.

- We have shown that we have the cadres to do it - specialists, welders, fitters, pipefitters, people for reinforcement, for aluminum structures, as well as a design bureau that cooperates with us constantly. We also have supervisory cadres. The company is certified by Bureau Veritas, PRS, the 1090 standard, which allows the construction of steel structures, including for offshore - says Nastkiewicz.