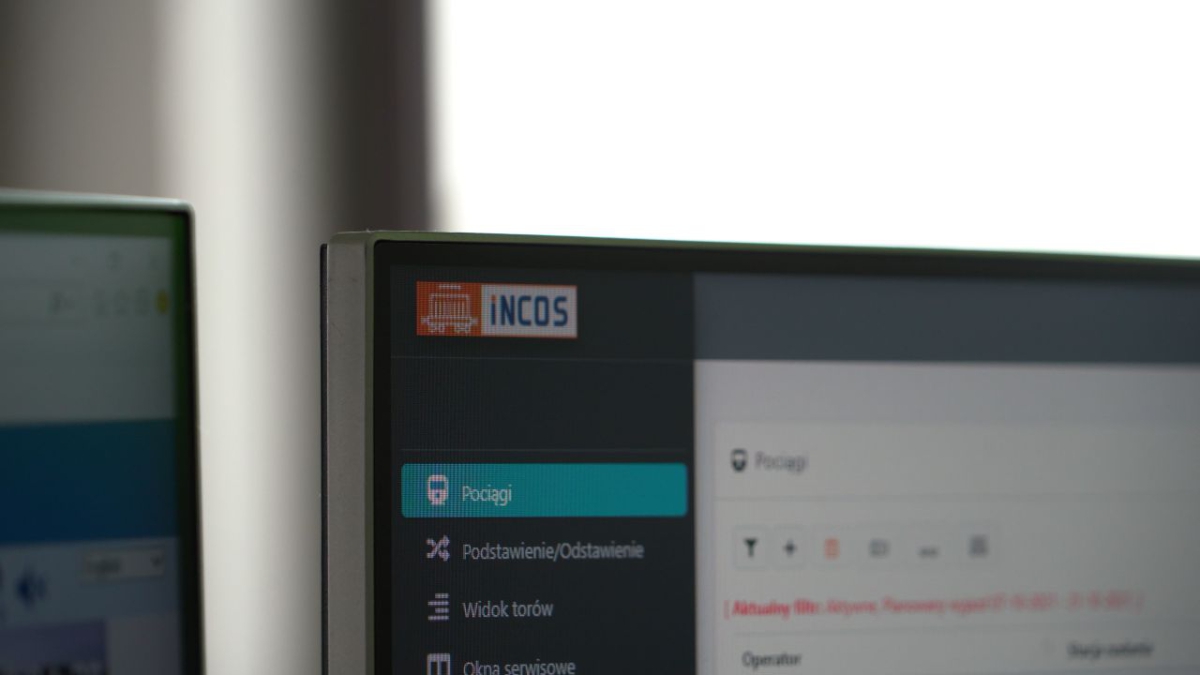 Seaports, Shipping, Logistics
INCOS, or how BCT makes it easier to work with trains [VIDEO]

Baltic Container Terminal has developed its own IT system that greatly facilitates the management of intermodal trains awaiting for their cargo in the terminal. INCOS is, however, available to all participants of intermodal trade and may significantly affect the development of rail transport in the country.

Intermodal transport has many advantages, but it is also a very organizationally demanding formula. All the more so when we look at it from the sea terminal perspective, where containers are reloaded onto trains. There are so many possible complications that the Baltic Container Terminal decided to make the task easier for all participants of the process and create a computer system that will significantly simplify the management of railway operations.

In search of facilitation

The intermodal supply chain involves many companies. Therefore, the basis is an effective exchange of information. In the twenty-first century, theoretically, there should be no problems with this - e-mails, telephones and all kinds of quick text messages are our everyday life, we can easily send large files. And yet here's the issue - too much scattered data can cause problems, it is easier to overlook important information.

In sea terminals, however, there is no room for errors and information chaos. Therefore, BCT - Baltic Container Terminal decided to take a step forward and make the work easier for itself, but also for all companies involved: operators, rail carriers, forwarders and even other terminals. This led to INCOS, a digital train management platform that solves a whole lot of problems.

- The Baltic Container Terminal, like every modern port, invests in storage yards, large devices such as cranes, and specialized, integrated IT systems, without which it is difficult to imagine functioning in today's digital reality - says Wojciech Szymulewicz, CEO of BCT. - The INCOS system that we have created is innovative and unique. It covers communication in the area of intermodal transport, and improves the flow of information between all participants in this process.

- The INCOS platform is a digital data exchange environment for all partners who participate in the intermodal supply chain - defines Piotr Frąckowiak, the initiator and leader of the project. - Its aim is to improve the coordination of the positioning of container trains at the terminal by means of system integration - he specifies.

The system was created as part of the international research project COMODALCE, co-financed by the European Fund Interreg Central Europe.

Each month, BCT serves approximately 250 intermodal trains from 13 different operators. The wagons depart from here in every most important direction into the country, and thus also along one of the most important European rail corridors between the Baltic Sea and the Adriatic Sea, via Silesia, Vienna, Bratislava, the western part of the Alps and northern Italy. Rail transport - especially in combination with renewable energy sources - is also one of the most efficient and ecological. It is therefore not surprising that both the European Union, the Port of Gdynia and BCT focus on investments that will increase the share of railways in transshipment. When the Port of Gdynia Authority together with BCT invested in modern infrastructure a few years ago, the terminal decided to develop a tool that would facilitate the management of trains and eliminate the traditional methods of information exchange between the entities involved - especially traditional paper documents, but also a large number of telephone and fax connections, as well as e-mails. By means of the INCOS platform, all information previously provided in the above-mentioned ways is collected in one place.

The starting point and the basic scheme of INCOS operation is simple - the parties involved, i.e. intermodal operators, carriers, forwarders, terminal employees enter into the system relevant information on trains: their arrival, departure, number of wagons and containers, etc. This data is available at any time to everyone involved in the transport service process. There is no longer any need to ask by phone about what time a given train is scheduled - just a few clicks and all authorized persons have access to relevant information.

- Thanks to this, they are able to plan their operations in an effective manner, reduce costs and optimize processes. The entire intermodal transport gains in competitiveness, credibility, is easier to use and more accessible - summarizes Piotr Frąckowiak.

From BCT to everyone

Of course, the development of the system itself is only part of the job. Each of the institutions involved in the organization of intermodal transport uses a different operating system. Therefore, the next key step was to make appropriate integrations of the software used by other companies with the INCOS system. Thanks to them, companies can still use their own solutions, and all data is downloaded and published in an appropriate form on the INCOS platform, which makes it available to other involved at the moment of its creation.

- We wanted the INCOS platform not to be another port system in which our employees have to manually fill in the data that the terminal needs, but that the data exchange between Loconi and BCT would take place automatically through inter-system integration. We managed to do that - describes Karolina Wlazło, director of key clients and projects at Loconi Intermodal, one of the operators organizing connections from Polish ports.

In 2020, Loconi was invited by the Baltic Container Terminal in Gdynia to cooperate with the integration of its IT system with the INCOS platform. - Intersystem integration optimized the work of our operational department - describes Karolina Wlazło. - The main benefit is that we have reduced to a minimum manual work, information exchange by e-mail and telephone, which still functions as a standard channel of data exchange when it comes to rail operations with many entities in our industry - she says.

INCOS integrations with other systems are introduced systematically. In addition to the integration with the Loconi Intermodal operating system, it exchanges the messages with the PCC Intermodal system and, of course, with the Terminal Operating System of the BCT itself (Main Sail).

Integration with the Szips system of the Port of Gdynia Authority and PasCom Spedycja II is under development. Subsequently, another key cooperation is planned - with the software of PKP Cargo and other railway carriers such as CTL and DB Cargo.

Such amount of integration with various operating systems of various companies and institutions does not mean that every person has access to all information. Thanks to the use of the authorization method, a specific user registered in the system can view only the necessary data in accordance with the scope of his / her rights. On the other hand, INCOS was designed so that as many companies as possible involved in the intermodal supply chain could easily use it.

- The INCOS platform is a free tool, available to everyone, open to cooperation. Thanks to integration, it is able to communicate with partners' systems in various communication standards and with a varying degree of openness to communication - says Piotr Frąckowiak.

However, there are also institutions that do not use dedicated operating systems. Then what?

- For those who do not have their own operating systems, we offer a friendly, intuitive user interface that is accessible via the website. We invite everyone to cooperate and discover the potential and operational possibilities of our platform - says Frąckowiak.

It is good, it will get even better

INCOS was implemented at the Baltic Container Terminal in Gdynia in February this year. - Currently, 10 integration messages have been developed in the platform and in August alone we processed 260,000 transmissions between the INCOS platform and other systems. To handle such a large range of data, it was necessary to expand our IT environment with additional servers - says Andrzej Puławski. The system architect adds that he is surprised by how many elements had to be included in the system: - When I started working on the project, I did not expect the amount and complexity of processes that the platform would have to handle to reflect intermodal processes - he says.

The key challenge, however, was to ensure the basic functionalities of the platform - transfer of processes that had so far been carried out using printed documents, countless telephones, faxes and e-mails to one, easy-to-use and clear format. All this had to be done in such a way that each of the partners could quickly process large amounts of data, which are then shared with others. During the work on the platform, consultation with all parties involved potential users turned out to be of key importance. The comments and suggestions allowed to precisely define the needs and develop solutions.

The fact that INCOS is already functioning and fulfilling its role does not mean that the work on it has been completed. In addition to the constantly developed integrations with partners' systems, INCOS itself evolves and develops. There are still ideas how to improve the system. After the implementation of the platform, a new version appeared, in which new functionalities were implemented, which were postulated by users during training and tests. In this way, the system has been enriched with, among others, e-mail notifications about changes in the statuses in the process and the progress of events, a preview of the current BCT train service plan on a given day along with basic information, and even an up-to-date view of the settings of wagons on the BCT track.

Availability is the keyword for INCOS. It is not only about easy access to appropriate data sets, but also the possibility of using the system also in other terminals. Although the creation of the platform was initiated at BCT and the platform is already operating in this terminal, other sea and land terminals can also easily use it - the logic of the system and its functionalities are ready and waiting. The very structure of the platform provides for multi-termination and cooperation within the entire intermodal environment in the country.

- The system is designed to enable the future use of the platform to support other sea and land terminals and to develop it into a coordinating tool on a larger scale - confirms Andrzej Puławski, system architect.

- We are proud that our investment has contributed to the digitization of this area and will undoubtedly contribute to the development of rail transport in Poland - says Wojciech Szymulewicz, CEO of BCT.

Most recent
Record at the Port of Gdynia. BCT terminal has exceeded 500,000 TEU of annual reloading (photo, video)
2019-12-23
OOCL APPOINTS BCT AS ITS CONTAINER TERMINAL
2010-06-19
Port of Gdynia: bids in the tender for the operator of the OWF and container terminal
2021-11-15
Expansion of the intermodal container terminal in the Port of Gdansk completed
2016-01-22
SHOW MORE
Meet innovative companies from Poland
SHOW