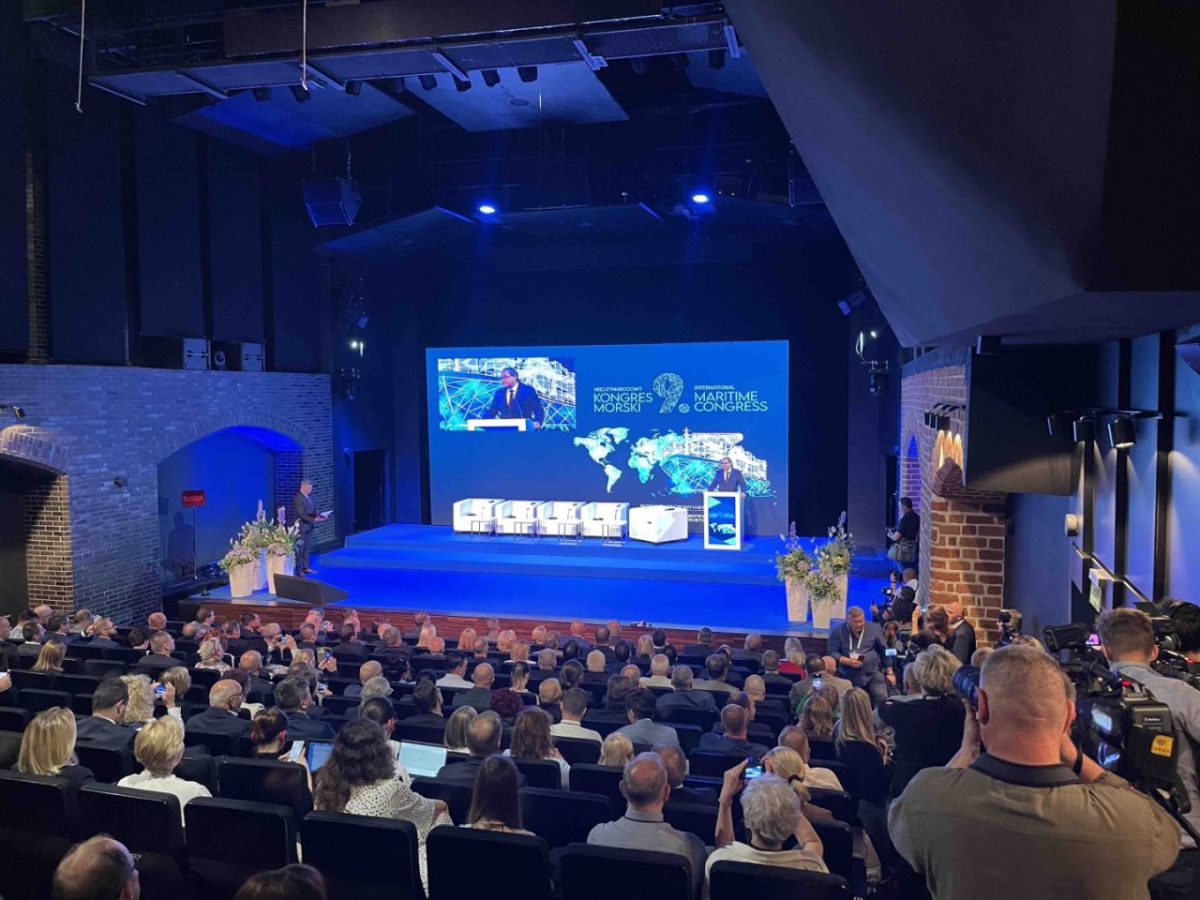 Seaports, Shipping, Logistics
Maritime Congress in Szczecin. "The functioning of ports today is crucial to the country's security" [VIDEO]

The 9th International Maritime Congress lasted for two days (June 29-30) in Szczecin. The event discussed, among other things, the development of infrastructure projects related to access to seaports, from the sea and land. There was no shortage of debates about shipyards, offshore in the broadest sense, as well as inland waterways, road and rail connections. We asked politicians and heads of maritime companies about upcoming plans and challenges.

The discussions that took place at the Congress largely concerned the geopolitical situation and the consequences related to Russia's aggression against Ukraine, how they will affect the maritime economy.


- Today we are rebuilding the logistic thrust on Polish ports and the entire export-import economy. On top of that, there are economic sanctions, so another import process refers to hydrocarbons and other fuels – Deputy Infrastructure Minister Marek Gróbarczyk said in an interview with MarinePoland.com.

The politician stressed that the ninth edition of the event is groundbreaking for many reasons. - It is such a moment when the whole world is rebuilding, which the Congress perfectly recognizes. I hope that the conclusions made here will influence the decisions made in the future in politics as well.


In Szczecin, over the past two days, it was repeatedly emphasized that, among other things, due to the war across the eastern border, the role of Polish ports has grown significantly and will continue to grow. And this in turn also translates into the functioning of the maritime economy, investments in infrastructure and decisions of shipowners.

- Ports bring nearly 30 billion zlotys to the state budget, but today the challenge is energy security. We now know that ports are the only route for us for coal and oil - Gróbarczyk stressed, adding that in addition to Baltic Pipe, the importance of the Swinoujscie gas port will also be crucial for Poland.

- A redirection of logistics chains is also underway. Poland feared a decline in container transshipments after the pandemic. The situation, including at DCT, has shown otherwise. Today we are recording an absolute increase in cargo coming into Poland. We are the only safe place in terms of east-west or far east connection with the southern part of Europe.


Among the strategic investments, the deputy minister mentioned the approach track to Swinoujscie for the contracted container terminal.

- This is an investment worth about PLN 6 billion, he reminded. - Next in line will be the modernization of all ports. We recently took delivery of nearly five kilometers of new wharves at the Port of Gdansk, Gdynia is constantly modernizing, and Szczecin is a huge construction site when it comes to preparing wharves for a 12.5-meter deep track. Meanwhile, the ferry terminal in Swinoujscie is developing at a dynamic pace - he enumerated.


The co-organizer of the 9th International Maritime Congress was the Szczecin and Swinoujscie Sea Ports Authority. President Krzysztof Urbas listed investments related to the deepening of the 68-kilometer-long channel from Swinoujscie to Szczecin among the flagship projects for Szczecin.

- The dredging in Szczecin will be completed with two investments: Debicki Canal and Kaszubski Basin - adds President Urbaś.

Szczecin sees future in offshore. A deal with Orlen by the end of July?


- The future will depend on the degree and timing of the tenders that are underway. The first is a deep-water container terminal in Swinoujscie. The second tender is for land left over from the Gryfia shipyard for offshore activities: an installation terminal, perhaps also service functions in the future. We are in intensive talks with Orlen, which has submitted a bid. If the documents are correct, we will come to an agreement on a lease for 30 years, then perhaps by the end of July we will be able to sign a preliminary agreement - the President of the Szczecin and Swinoujscie Sea Ports revealed.

The next tender is for Ostrow Grabowski in Szczecin, among others.

- Several foreign companies are interested in doing offshore business here, right in the Szczecin and Swinoujscie ports. We think this is the future, something that will radically change this kind of business related to wind farms and RES in Polish seaports - the president argues.

In turn, Łukasz Greinke, president of the Port of Gdansk, pointed out that more and more Poles are realizing how ports are extremely important to the national economy.

- We can all see how the blockade of Ukraine's ports is affecting the grain market. Now we have to assist our colleagues in exporting these goods, but on the other hand we are facing a surge of goods that Poland imports - the president explained. - These goods, which until now entered the country by rail or car from the east, through the border blockade, must now reach Poland by sea from completely different directions.

He pointed out that the functioning of ports is crucial to the country's security. - It can be created by building large hubs. In the case of Gdansk, we do it through containers - he gave an example.

FSRU terminal in the Gulf of Gdansk. What role will the Port of Gdansk play?

The floating LNG terminal in the Gdansk Bay was originally scheduled to be built in 2026-27. There are many indications that the deadline will shorten to 2026. The Port of Gdansk has already signed a letter of intent with Gaz-System, but the Maritime Office in Gdynia is also a party to the agreement.


- Our roles are clearly divided. The Maritime Office is responsible for the construction of the breakwater, the port of the ship's berth, and Gaz-System for the other elements. We are assuming a joint bidding in a public procurement, the design goal of which will be to build both the berth and the entire technical installation necessary to carry out transshipments - explained president Greinke.

Meanwhile, Monika Kozakiewicz, president of Nauta Shipyard, recalled that the company she heads is filled with numerous projects. Among them are dock repairs.

- We are very satisfied, this market is growing dynamically - the CEO rejoiced. - We are also active in the special production market. Last Friday, we signed a contract for the modernization and dock repairs of three minesweepers for the Naval Port Command in Swinoujscie.


The project will be carried out in a consortium with PGZ S.A. as the leader. The other technical leader, besides Nauta, will be the Naval Shipyard.

It is worth noting that Gdynia's Nauta shipyard frequently repairs bulk carriers of Polish Shipping. The headquarters of this shipowner is located in Szczecin. - Among other things, we deal with class overhauls for the Polish Steamship Company, in their traction the ships also have ballast water treatment systems installed - the Nauta president added.

Ecology an important topic of the Maritime Congress

During the Congress, we also asked Andrzej Madejski, head of Polska Żegluga Bałtycka, for a comment. How is the shipowner developing and modernizing shipping from Swinoujscie to Swedish Ystad?

- This year's Congress began with a strong emphasis on ecology, a significant increase in fuel prices, as well as freight prices - noted President Madejski. - As a Polish operator, on the Poland-Sweden line, we face two aspects in terms of requirements for shipping. The first is environmental, where we have to adapt our vessels to the upcoming requirements of both the European Union and the International Maritime Organization.

A huge problem is the increase in fuel prices. In the case of conversion of ships to liquid natural gas propulsion, there are 100 percent price increases per ton of this fuel.

Recall that Polska Żegluga Bałtycka is in the process of modernizing its fleet. - At the moment, it is known that the second ferry in the series of three being built at Remontowa Shipbuiding S.A. is destined for us. We are in the process of signing charter contracts with the companies responsible for building the ferry. After being subsidized by the State Treasury with 140 million zlotys, we are still looking for a vessel on the secondary market - he concluded.