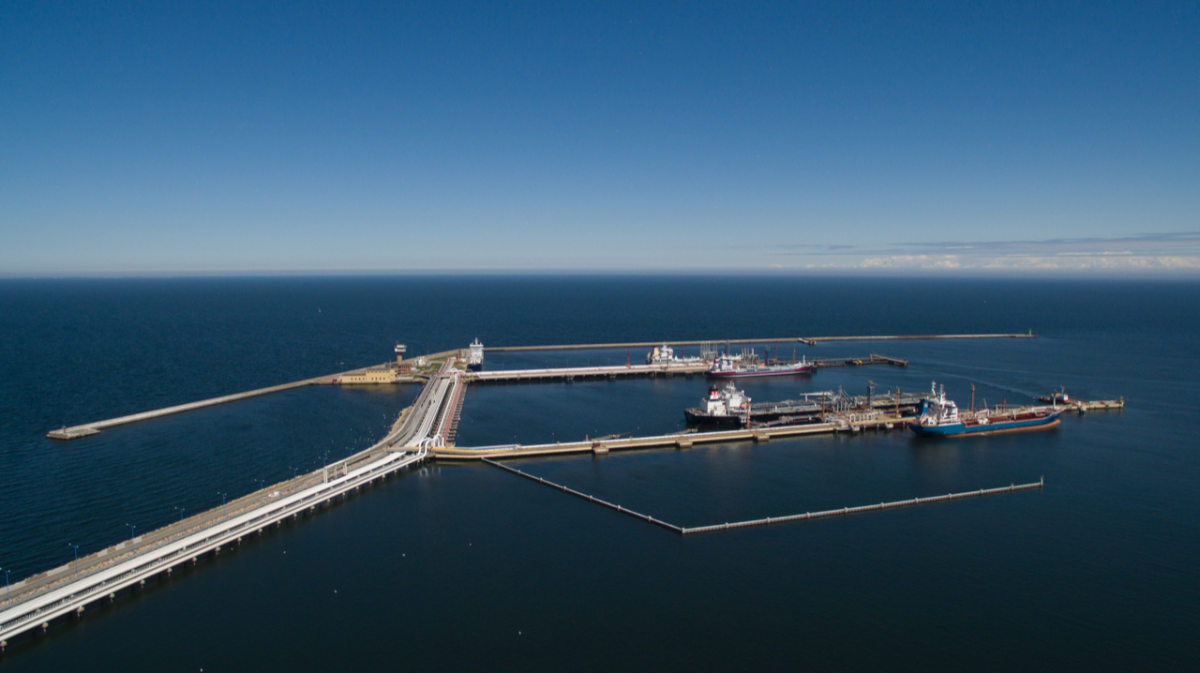 Seaports, Shipping, Logistics
Naftoport with a record of nearly 18 million tons. Already two thirds of the Polish oil demand comes to the Port of Gdansk

An increase of over 6 percent compared to the record-breaking 2019 was recorded by Naftoport from the PERN Group. Company handled nearly 18 million tonnes of crude oil and fuels in 2021.

As PERN emphasizes, Naftoport is currently a key company that ensures the diversification of crude oil supplies to Poland. Naftoport is a company from Gdańsk, the only sea crude oil transshipment terminal in Poland, one of the largest and most universal terminal for handling refined products, and also one of the largest transshipment terminals in the Baltic Sea.

Despite the ongoing pandemic, 2021 was marked by growth for the global economy.

- The trend was similar with us - says Andrzej Brzózka, President of the Management Board of Naftoport, in an interview with GospodarkaMorska.pl. - Let me remind you that Naftoport's result in 2020 was sixth in terms of volume, which means that it was also good, but it was a clear correction compared to the three previous growth years.

President of Naftoport: "Back with a bang"

President Brzózka called the year 2021 „back with a bang", and the „bang” was exactly 17.9 million tons of cargo.

- We achieved a surplus result, breaking the transhipment records by over a million tons from 2019 (16.8 million tons) - he reminds.

It is worth mentioning that it was in 2019 that Naftoport operated "at maximum speed due to the chloride crisis", which for 46 days stopped pumping the raw material through the "Przyjaźń" pipeline - it was about chlorides detected in crude oil transported via the main line to Poland from Russia, transit through Belarus .

- These are the results of the economic recovery that rose from the economic shock after 2020. This is the result of customer demand, as well as the mix of the diversification policy that has been maintained for several years, and the market situation - explains the president of Naftoport, which in recent years has become mainly a raw material port for crude oil.

- This increase is due to increases in crude oil transshipment in the relation of imports for domestic needs and in complementary transit to two refineries in Germany - he says.

- We carry out reloading of fuels for entities connected to the fuel infrastructure of the Lotos Group refinery. These transhipments are currently lower, which results from the market situation - high demand for fuels on the domestic market.

Andrzej Brzózka also referred to the merger with Lotos. - As far as Naftoport is concerned, the impact of the merger may be at least neutral, but it will rather translate into a definite plus, due to the expected increase in the volumes of the raw material supplied by sea, he explains. - And it should be noted that the transhipment of liquid fuels in all Polish ports last year already amounted to a record 27 million tonnes (including LPG and LNG), of which Naftoport handled 67%. The company also performed 13% of transhipments of the total cargo weight in Polish ports in 2021.

Crude oil flows to Poland by sea - via the Gdansk's Naftoport

According to President Brzózka, on the basis of data up to November 2021, Poland's demand for oil delivered by sea - mainly from directions other than the east - amounted to almost two-thirds.

- Less than seven years ago, this result was 25 percent - he reminds. - We crossed the barrier of 50 percent of our share in the volume of gas supplies in 2019. And this level is clearly increasing, which means that the amount of crude oil transported by sea is increasing.

According to PERN, in the last two years the company "radically increased the storage capacity dedicated to crude oil on the coast.

One cannot forget about the extensive resource base in Gdańsk and the completed second stage of the expansion of the local Oil Terminal, which increased PERN's storage potential by almost 600 thousand square meters.

The transhipment potential of Naftoport

After analyzing the increases in transhipment and the company's capabilities, it can be said that it is able to cover up to 100 percent of Poland's demand for oil. - And to carry out additional foreign contracts - says the president. - A lot depends on the land system, the combination of land capacity with species diversity. It's about the separation of oil types.

Recent investments have significantly improved throughput. We are talking about the expansion of the nearby TNG terminal and the PERN base in Górki - this increased the capacity by over 0.5 million tons.

- The system is becoming more and more efficient, it was shown in 2019. The situation is at least good - believes the president.

The president adds that the works that Naftoport is planning are modernizations. The company is not planning any spectacular investments in the near future. - The current infrastructure has enough potential - he says. - Currently, the most important thing is maintenance and business continuity. This is what renovation and modernization works are aimed at. Anyway, we've been successful in it for years. We have no downtime. We intend to maintain this in all traffic conditions, although in the case of such large reloads, it is not an easy task. Our honesty and reliability make our clients trust us more and more. The stability of deliveries by sea is of great importance - says the president of Naftoport.

- Larger and larger ships are coming to us - says Brzózka. - In 2015, 33 percent of ships were oil carriers, which are units several times larger than product tankers, and now this result has increased to 67%.

As he pointed out, Naftoport can be entered by vessels with a length of more than 300 meters and a draft of 15 meters, and customers have five reloading stations at their disposal.

PERN emphasizes that Naftoport has the capacity to tranship over 36 million tonnes of crude oil and 4 million tonnes of petroleum products per year, thus ensuring the ability to fully cover the needs of refineries connected to the PERN pipeline system.

The company also explained that in the sea terminal of Naftoport there are reloading of crude oil, gasoline and diesel oil, as well as aviation fuel, heating oil, condensates and components.

PERN is a state-owned entity, strategic for Poland's energy security, managing, inter alia, in country by pipelines pumping crude oil to the PKN Orlen refinery in Płock and the Lotos Group in Gdańsk, as well as to two refineries in Germany and having raw material and fuel storage facilities.

Recently, PERN reported that the capacity of its crude oil bases is now 4.1 million cubic meters. - the raw material is stored in 75 tanks, and the length of pipelines for its transport is 1,845 km, while in the case of fuel depots, the company has 315 tanks with a total capacity of 2.1 million cubic meters, and the length of product lines is 616 km.