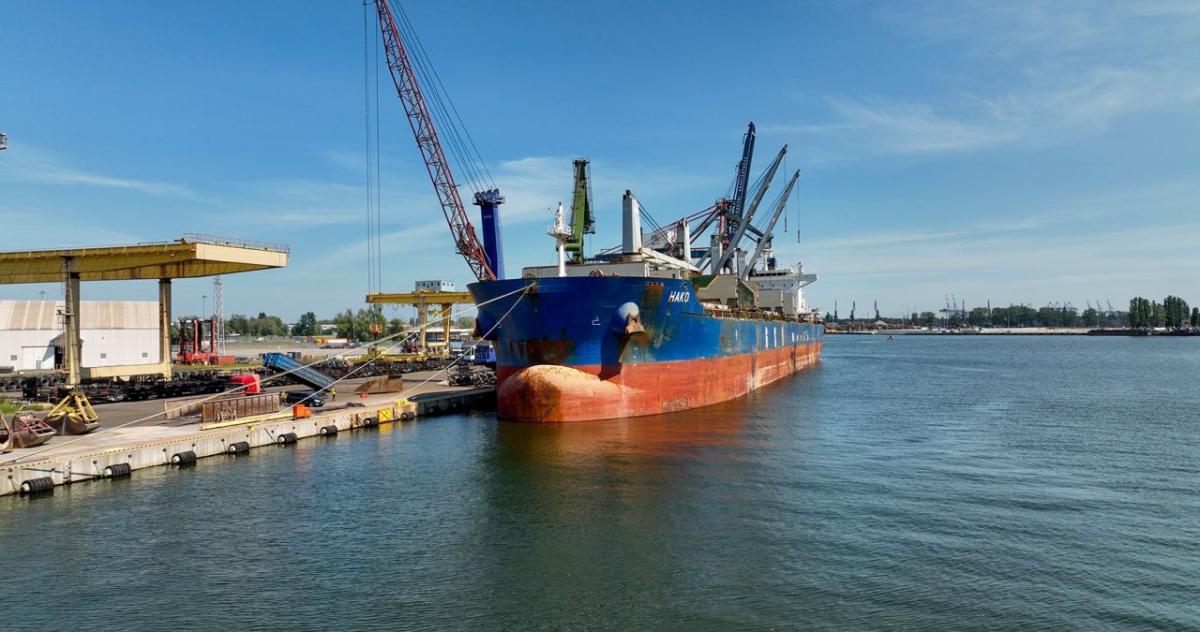 At the end of May, Port Gdański Eksploatacja S.A., the largest universal transshipment operator in the Port of Gdańsk, handled the vessel Sarocha Naree, which took in in its holds about 30 thousand tons of pig iron from Ukraine.

The cargo arrives at the Port of Gdańsk by rail from distant Ukraine, i.e. from the Kryvyi Rih steel plant. This project is part of a very important plan to return the town of Kryvyi Rih to normalcy, where the steel plant is the main employer for the residents of the town and the surrounding area.

Steel and all finished steel products have been one of the leading cargo groups handled by PGE for many years. Since May, this cargo group has expanded with the addition of another cargo, i.e. metallurgical pig iron.

This is iron obtained from the smelting of ore in a furnace, or more precisely, from the spout of a smelter furnace to form blocks. In turn, the resulting product is processed into cast iron or steel.

The logistics chain is not an easy one, because not only does it have to get out of the war zone, but also at the Polish-Ukrainian border it has to be reloaded from a broad gauge system to a narrow gauge system.

This means not only additional time as well as a change of wagons (more or less, there are 2 narrow gauge trainsets for every 1 broad gauge train).

After a few days of travel from the border, the cargo is transshipped to a yard at Vistula Quay in the Port of Gdańsk. Ultimately, the cargo faces a long journey across the ocean.

- Since the blockade of Ukrainian ports, we have been receiving many inquiries from Ukrainian companies regarding transshipment possibilities in our area. We also take an active part in Polish and Ukrainian business meetings. The dynamic start of the year at Port Gdański Eksploatacja S.A. and the plans for the coming months show that there is a chance to double last year's result - says Pawel Nowak, the company's president.

Pig iron is increasing the portfolio of goods handled by Port Gdański Eksploatacja. The atypical cargo at the Port of Gdańsk is distinguished by its wagon-to-square handling method, which requires the use of semi-closed grippers and an electromagnet. Currently, a Hako vessel, which will take about 29,000 tons of cargo, is standing under loading at the Szczecin quay. Pig iron, like other bulk goods from Ukraine, has to be transshipped at border terminals to standard-gauge railcars.

In conjunction with Vetro, the company also handled the ship Federal Yellowstone with steel billets from Ukraine. The ship took 30,700 tons of cargo. The handling of the ship was performed jointly. This was the first such cooperation, and the second ship under billet loading. The first ship Federal Delta took about 20 thousand tons. Billets are going to Costa Rica, Dominican Republic, Canada.