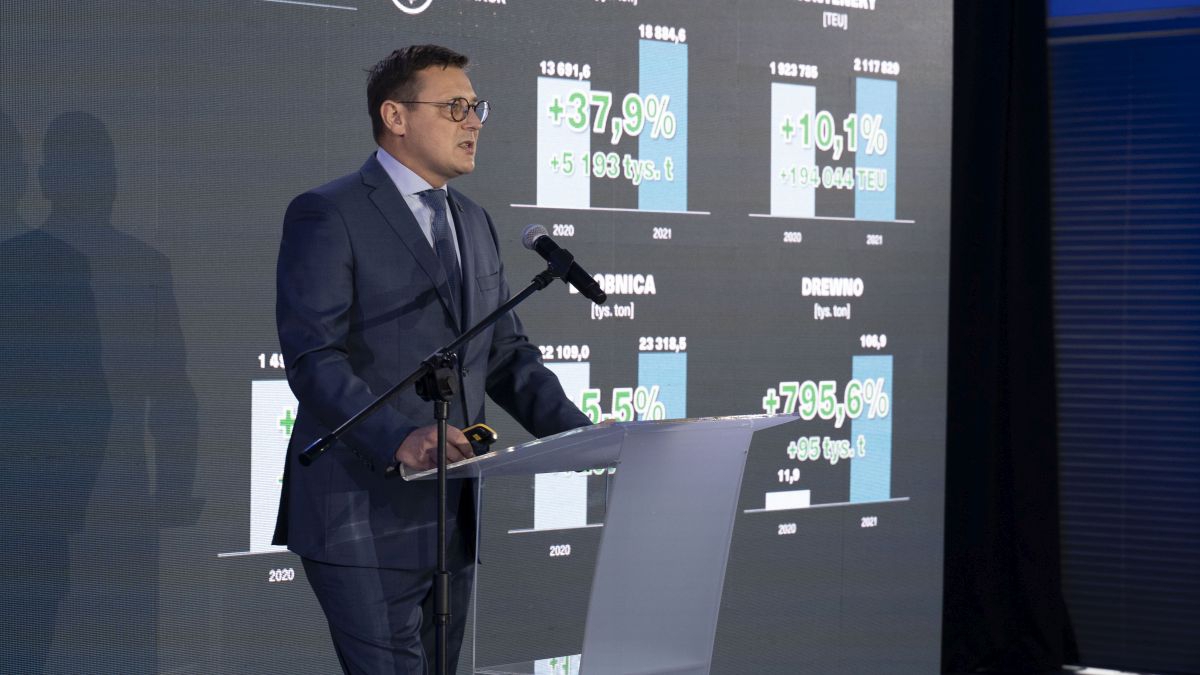 Seaports, Shipping, Logistics
The Port of Gdańsk with a historic record of transshipments - 53.2 million tons: "We have very high aspirations" [VIDEO]

A total of 53.2 million tons of goods were handled at the Port of Gdansk in 2021. Compared to the previous year, it is 11% growth.

- This is the best result in our history. We managed to break the record from 2019, in which we transhipped 52 million tons - emphasized Łukasz Greinke, president of the Port of Gdansk during the conference held at Ministry of Infrastructure.

The Port of Gdańsk is the fastest growing port in Europe in the last decade, with a growth dynamics of 110%.

- But if we compare the current result to the one from 2016, i.e. the year in which we made a decision to make large investments – in the access infrastructure to deepwater terminals, in the reconstruction of the fairway and modernization of nearly 5 km of quays in the Inner Port – we can see that it is precisely in this during the period the dynamics was the highest – an increase by nearly 16 million tons of goods – he added.

Historical result. Naftoport with a record of 17 million tons

Containers noted an increase of 10%. The numbers at the DCT (Deepwater Container Terminal) reached 2.1 million TEU. - This is an impressive result on a European scale. However, if we take into account the announcements of investments for which we have signed contracts, I am convinced that the DCT terminal should soon be among the top ten terminals in Europe. And this will make our port also advance in the rankings - emphasized President Greinke.

Achieving even better results should be expected in connection with the creation of the Baltic Hub 3 and the expansion of the back-up facilities at Terminal T2. Let us recall that DCT plans to land a sea area of nearly 36 hectares.

Grains transshipments also recorded an increase of 7.6%, reaching nearly 1.6 million tons. General cargo handling, including containerized cargo, recorded 5.5% - total transshipments of this commodity group resulted in 23.3 million tons. The highest growth was recorded for wood - a jump by as much as 795%. This is a cargo group that occurs at the Port of Gdańsk depending on the local market conditions.

Big investments behind them. Soon more

- At the moment, we are implementing another, smaller road and railway system at the back of the Przemysłowe Quay - reminded President Greinke. - We are preparing tenders that will be announced this year, i.e. reconstruction of nearly a kilometer of the Wiślane wharf. We are also planning to rebuild the Węglowy Quay in the Górniczy Basin, but that's not all.


At the beginning of January, in a tender for the lease of the so-called Deepwater, i.e. 27 hectares in the deepwater part of the Port of Gdańsk, bids were submitted by two companies: DCT terminal and Copenhagen Merchants.

- We are also conducting very advanced talks with Gas-System, which plans to locate a floating regasification station in the administrative area of ​​our port - reminded the president of the Port of Gdańsk.

They want more. President: "We are interested in the top ten"

- It should be emphasized that we managed to achieve this record during the investment process. The port never sleeps. Although the investments were in full swing, the operators carried out their reloading. We are pleased but not satisfied with the result we achieved last year. We have very high aspirations, we want to be one of the largest ports in Europe, we are interested in a place in the top ten. So far we have moved up to the 18th position in Europe, we are still on the Baltic podium - we are third in total transhipment. I am convinced that our next investments, which we will be implementing soon, will introduce the port in Gdańsk to new volumes. In 2-3 years, instead of five in front, we will have a six, and in the next five years - seven - assured President Greinke.

Most recent
Siark-Port reloads fertilizers in the Duty Free Zone at the Port of Gdańsk [VIDEO]
2022-01-22
The ports in Gdańsk, Gdynia and Szczecin-Świnoujście announce the results for 2021 [VIDEO]
2022-01-26
Proteh GlassDeep. The world talks about the innovative underwater window from Gdańsk
2021-12-12
DCT Gdańsk has published the Sustainable Development Report for 2020
2021-11-30
SHOW MORE
Meet innovative companies from Poland
SHOW